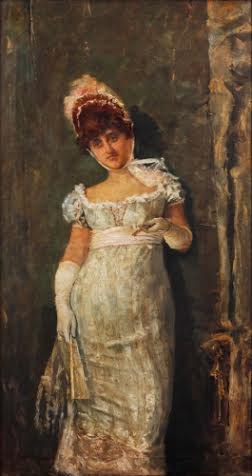 AMONG 180 pieces of artworks to be auctioned off by León Gallery during its Magnificent September Auction 2015 are an untitled work by Juan Luna and “Sungkaan” by Jorge Pineda.

An untitled oil-on-canvas work by Juan Luna, signed and dated 1884, features a comely European lady depicted in full figure in the formal dress of the time. The piece was acquired by National Artist for Historical Literature Carlos Quirino, then the aide-de-camp of President Elpidio Quirino, during the latter’s state visit to Spain in 1951. The painting, which measures 43” x 23”, is being auctioned off starting at P5 million.

Meanwhile, Pineda’s 1924 oil-on-canvas “Sungkaan,” the earliest of this series produced by the work, has a starting bid of P800,000. The other versions can be found at Bangko Sentral ng Pilipinas (1933) and Jorge Vargas Collection (1924).

He says National Artist Vicente Manansala’s “Adam and Eve” is “a standout with its imposing size.”

Another astounding piece is National Artist Ang Kiukok’s “Seated Figure,” which is among the most coveted of his subjects, De León says.

De León notes that a famous work by Anita Magsaysay-Ho is the 1957 oil-on-canvas “Lavanderas,” which has a starting price of P5 million.

“The artist had the image made into prints, and it was even said to have been her favorite,” he says. “The work has yet been the only Anita ever exhibited in the Singapore Museum of Art, also exhibited at the PAG in 1957 and at the Metropolitan Museum in 1988. It has been published in over five books.”

Another notable piece is BenCab’s 1996 “Mother and Child,” starting at P1.2 million.

The painting explores the “Madonna of the Slums” theme, present in many of his works. Much of BenCab’s art reflects on oppression, showing sympathy for workers, peasants and the marginalized. His “Sabel” series, for example, features a scavenger and homeless woman who became a common subject of the artist.

A late-19th-century Ilocos Partners’ Desk in kamagong and narra is a noteworthy piece of furniture up for auction.

Social historian Martin Imperial Tinio Jr. says the desk is the largest of its kind in the country and probably the only partners’ desk made of kamagong. An exact replica that also belonged to the same owner, but made of narra, is now in the Leandro Locsin Collection.

Another sought-after piece is the Important Mesa Altar by Batangas Master II, which came from the Tony and Cez Gutierrez Collection. It has a starting price of P800,000.

The drawers are flanked by narrowing flanges with fine lappet edges, while the posts are emphasized by channeling and parallel inlay strings of ebony (kamagong) and light wood.

“This altar table is in the classic style of the anonymous furniture maestro whose atelier was located in the Taal area (now San Pascual town), Batangas, active from the 1810s to the 1840s,” Tinio says. “He has been tentatively identified as the second, or Batangas Master II.”

A highly important piece is the glass-encased “Calvario in Virina,” which depicts the Calvary scene with the Crucified Christ, the Sorrowful Mother or Dolorosa, St. John the Evangelist and Mary Magdalene. It will be auctioned off starting at P300,000.

Made in the late 19th century, “Calvario” is made of ivory, wood, satin, silver, glass and gold thread.

De León assures that most of the works came from very distinguished provenance.

“I’m proud to say that extensive scholarly research went into studying the history of certain pieces, such as Pineda’s ‘Sungkaan,’ the piece by Juan Luna, Anita’s ‘Boti! Garapa!,’ among others,” De León says. “These artworks are supported by related literature and the necessary references.”

Also to be auctioned off are works by other National Artists: Victorio Edades, Napoleon Abueva, Cesar Legaspi, H.R. Ocampo, José Joya, Federico Aguilar Alcuaz, Arturo Luz and J. Elizalde Navarro; and works by such masters as Romeo Buenaventura, the School of Lorenzo Guerrero, and Diosdado Lorenzo.