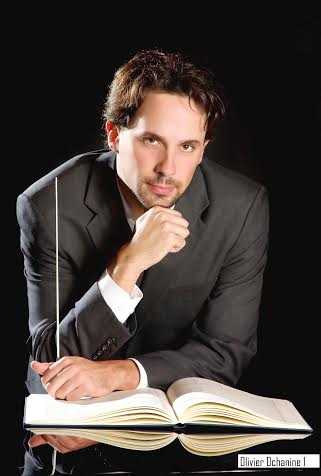 “THIS IS my first job as a music director. I learned so much from the Filipinos, the traffic [jams], their incredible talent. I learned to be more useful. Working with these musicians has taught me to communicate. As you know, I’m married to a Filipina. It has been a wonderful experience; I couldn’t have come to a better country.”

The speaker was Olivier Ochanine, French-American music director of the Philippine Philharmonic Orchestra (PPO), who presided over a press conference at Hotel Jen in Pasay City that announced the 2015- 16 season of the national orchestra. It will be the popular Ochanine’s last season with the PPO after a stint of six years.

He added: “I don’t think my time in the Philippines is over. I feel that I’m at home here. People ask me, “Are you going home?’ and I tell them I have a home.”

Members of the PPO performed some well-loved Filipino compositions during the press launch, as arranged in a classical style by composer Ryan Cayabyab: “Usahay,” the tender Cebuano love song; the popular folk song “Sarung Banggi” from Bicolandia; and the lively Tagalog ditty “Filemon, Filemon.”

PPO is a resident company of the Cultural Center of the Philippines (CCP). Its concert season, “Reveries,” opens on Sept. 11 with Ochanine conducting the orchestra and with Malaysian pianist Claudia Yang interpreting Chopin’s Piano Concerto No.1. The pianist has been cited by China Voice magazine of New York as “the Global Chinese of the year 1999.” The concert will be capped by Shostakovich’s Symphony No. 10.

The third concert, on Nov. 3, will feature a prominent French horn player backed up by the PPO under Ochanine. The soloist and work will be announced soon. The program includes Poulenc’s “Les Biches” and Mendelssohn’s Symphony No. 3 (Scottish).

Another Japanese conductor takes over the podium on Jan. 22 in the first concert for 2015, Tetsuji Monna. The program includes Haydn’s Symphony No. 94 and Beethoven’s famous Symphony No. 3 (“Eroica”).

Ochanine returns with guests soprano Denise Beck and baritone Thomas Sturm on Feb. 19. The program is part of the Carl

Nielsen Project and features Nielsen’s “Maskarade” Overture, some of the composer’s well- known songs, and his Symphony No.3 (“Sinfonia Espansiva”).

Leading soprano Rachelle Gerodias, now a mother, returns to the concert stage with her husband, Korean baritone ByeongIn Park, on March 18, along with the Philippine Madrigal Singers.

The work of the winner of the 2015 Composition Competition, to be announced in December, will be played. And Brahms’ Ein-Deutsches Requiem will have its Philippine premier, with Ochanine conducting the PPO.

During the press launch, the PPO music director gave a run- ning commentary on the program.

Shostakovich’s Symphony No. 10, composed under the regime of the dictator Stalin, “is a relentless work of music and has never been performed in the Philippines,” he said. “Poulenc’s ‘Les Biches’ means a dose of a female ear and nothing more. It’s delightful music, very French and very well received when it was first performed.”

He added: “The ‘Eroica’ symphony has not been played in the Philippines since 1980. It has a very interesting back- ground, with Beethoven growing disillusioned with Napoleon. Unlike other Requiems which focus on the dead, Brahms’ Requiem focuses on the living.”

“I love creating suspense,” Ochanine declared. “You’ll find out why I selected these compositions.”

It is also his last concert with PPO. And the program annnouncement on the screen read: “Rathnam returns, Ochanine departs.”