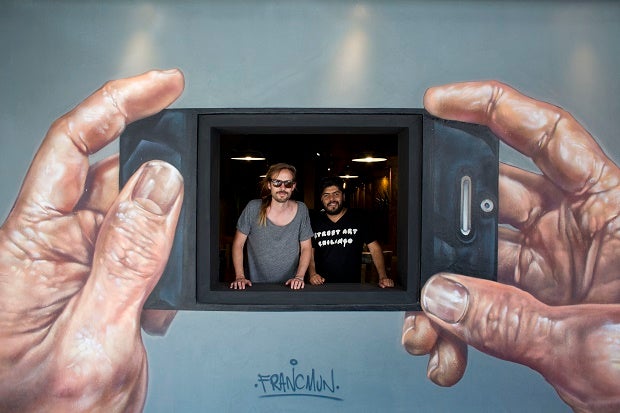 In this Sept. 1, 2015 photo, street artists Jenaro de Rosenzweig, left, and Alejandro Revilla pose for a portrait behind a restaurant's window covered with a mural by artist Francisco Munoz, signed with his artist's name below, in the Roma Norte neighborhood of Mexico City. Rosenzweig and Revilla founded the "Street Art Chilango" cooperative in March 2013, which is filling neighborhoods with public art by local street artists. AP

MEXICO CITY — Mexico’s mural art is getting a modern makeover.

Former graffiti taggers and graphic designers have joined together in a cooperative called “Street Art Chilango,” painting walls with popular Star Wars characters and hyping their work on social media.

Founded in March 2013 by Jenaro de Rosenzweig and Alejandro Revilla, the group’s name uses the slang term ‘chilango’ for things from Mexico City.

And their murals aren’t only on brick-and-mortar walls.

Rosenzweig, who goes by his artist name Jenaro, vigorously promotes the team’s artworks on social networks and the group’s website, streetartchilango.com. The group has garnered more than 165,000 “likes” on Facebook, 72,000 followers on Instagram, and 9,000 followers on Twitter.

“We have the muscle of the social network and the brains to put the artists to work,” said Jenaro.

In April 2013, he launched the hashtag “#streetartchilango” so that anyone using Instagram could plot street art locations on the site’s interactive Google map.

“People embraced it and started using it,” he said. Suddenly, “I started meeting every artist there is.”

As the virtual map attracted attention, Jenaro also designed a Mexico City walking tour that visits many of the online locations. The group still organizes tours nearly every weekend.

Though many of them started as graffiti taggers, group members can now earn a living from splashing walls with their paint.

In recent weeks, Street Art Chilango artist Andrik Figueroa Barreto, who signs his work as Andrik Noble, has produced several Star Wars-themed murals, including a 60-foot-long storm trooper mural at the Mercado Michoacan. “I don’t have any studio. Everything is in the street,” said the artist, whose hands, T-shirt, and shorts were covered in paint smudges of a dozen different colors.

Business owner Pascual Medina Ortiz smiled as he pointed out a spray-painted image of Princess Leia on the front of his shop in the Condesa neighborhood. “Now a lot of people are coming just to see the art.”

Two miles away, fellow Chilango artist Beatriz Avila Haro sat on scaffolding 10 feet in the air as she applied strokes of black to a white wall.

Ricardo del Razo, the architect who commissioned that project, said the 12-foot-tall mural will show a woman pressing a pencil to the drawing board, “devising how to solve problems.”

“So painting walls was already cool in Mexico,” said Jenaro.

The group’s next step comes in November at the Art Basel festival in Miami, where Jenaro and Avila aim to display a mural to an international audience. “We are going to create new stuff that will blow the whole world’s minds open,” Jenaro said.