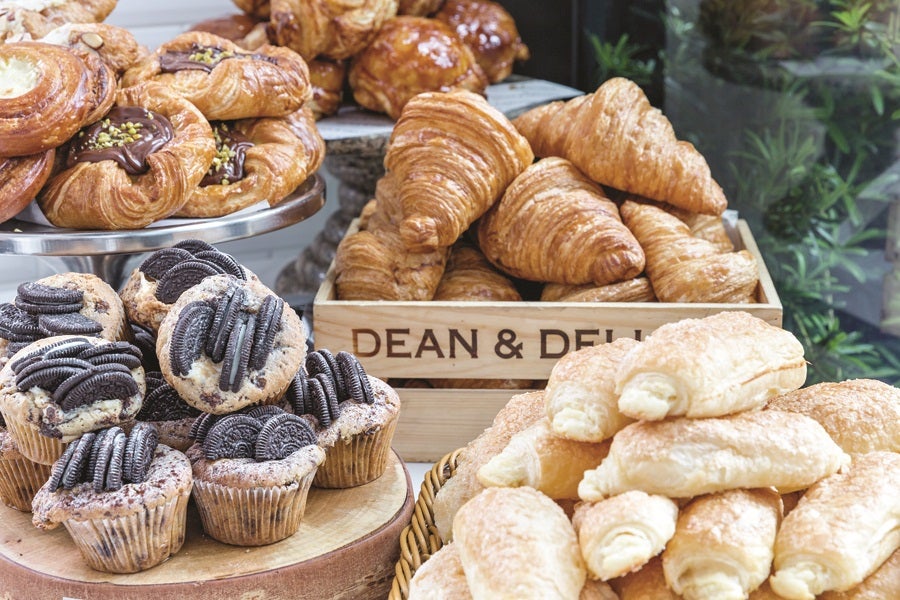 VIENNOISERIES (puff pastries), including what Tanchay claims to be “the best croissant in Manila,” and scrumptious Cuban cheese roll (right foreground)

It’s with no irony when Caroline L. Tanchay says the angry customer is their best teacher, one whose negative feedback gives her team at Dean & DeLuca the opportunity to improve their quality of service.

It has been five months since the renowned New York gourmet grocer and food hall opened its first outpost in the Philippines, and its licensee is forthright in saying she has had to face many challenges in her effort to make her first F&B venture take off.

But anyone who knows Tanchay, 46, would also know she’s not the kind who’s cowed by hurdles. She thrives in them.

This wee of a woman is a colossal entity in the male-dominated mining industry, as the chief executive and president of a publicly listed mining company, and president of its subsidiaries dealing with hydro power plants, renewable energy and aggregates, among others.

Dean & DeLuca is Tanchay’s big passion project. She sought to bring it in because she loved the brand.

She’s also an ardent baker who de-stresses and finds clarity after a pressure-filled day in the merry medley of flour, sugar and butter.

She and her team had a one-year R&D before opening Dean & DeLuca at Rockwell’s Edades Tower in Makati, enough to know the grueling process that went into, for instance, perfecting what she now says is “the best croissant in Manila.”

The Dean & DeLuca in Manila is a license, not a franchise, a choice Tanchay made because the latter would not have posed enough of a challenge: It’s boxed-up, and you can sell only the menu as set by the American company.

A license means that Tanchay can create her own menu and bakery products to adapt to the local market, with the guidance and approval of New York.

She’s also allowed to feature the cuisine of other Dean & DeLuca markets, like, say, fusion sushi, which is the trend. Ergo, the menu is constantly evolving.

“If we were a franchise, I couldn’t make a cronut,” she says. “Since we’re a license, and if they approve, we can sell it. Food is changing, like fashion. We’ve created a very good line of viennoiseries (puff pastries), which no other Dean & DeLuca has, so they also ask help from us.”

Creating the food menu for the restaurant was much easier, Tanchay adds. It was the bakery that took a long time to perfect.

She hired a former pastry chef from the famous Bouchon Bakery, and another baker who worked at the three-Michelin-starred Jean-Georges to train her bakers. Their levain and sourdough breads are yeast-less, which she says is healthier for the gut, and use a 22-year-old leavening agent.

“The older it is, the better taste it gets. It has more lactobacilli and more nutrients.”

Making the sourdough starter (levain) has been a test in patience, and quite a technical skill.

“Mahirap gawin kasi inaalagaan sya. We feed it like a plant. If you make a mistake, it could die. If mali yung fermentation, masama ang lasa… But we balance. You like it, but some here they don’t like [the sour taste]. That’s why in the pizza, we go easy. Minsan natatakot ako baka sabihin nila, yung bread ‘nyo maasim.”

Unlike in, say, Japan or New York where they sell mostly prepared food that can be eaten on the go, the Rockwell branch is a 100-seat café that serves pizzas, pastas, sandwiches and meals, fresh-baked breads and pastries. It serves breakfast on weekends. It has also just set up a cocktail bar.

“The Philippines doesn’t really go for grab and go,” says Tanchay. “We’d rather go to a place where we can sit. We also didn’t put a grocer here because a supermarket is just right across, and we have very limited space.”

Even as an avid baker, Tanchay never planned on venturing into food. But when her company, Oriental Peninsula Resources Group (ORE), began building its corporate tower in Bonifacio Global City, a 34-story architectural landmark designed by the world-renowned Gensler, it needed a flagship tenant in the vast commercial space on the lobby. A fast-food brand or even a bank just wouldn’t fit the bill, but the look of Dean & DeLuca, they decided, would be perfect. (The building called ORE Central will be turned over early next year.)

Unknown to her at the time, there were already at least 20 other companies paying court to Dean & DeLuca to come to Manila. Tanchay had no shot, as one of the criteria for approval was for her to have an existing restaurant operation.

But, through one of her clients in Japan, where ORE exports nickel, she met the local franchisee for Dean & DeLuca, who in turn introduced her to the New York owner.

“The owner saw my passion in whatever I do, and that’s probably what made him decide to give it to us, without passing the qualifications,” she says.

The BGC branch will be a far bigger affair.

Tanchay’s family is excited because her kids—age 19 and 12—know food.

“They don’t understand what I do [in mining]. They can’t grasp it.” Now they get exposed to a business they understand.

She adds, “My goal is simple: to improve service and to maintain quality, so that when people come, they’re happy.”

Even if that process means getting yelled at from time to time.