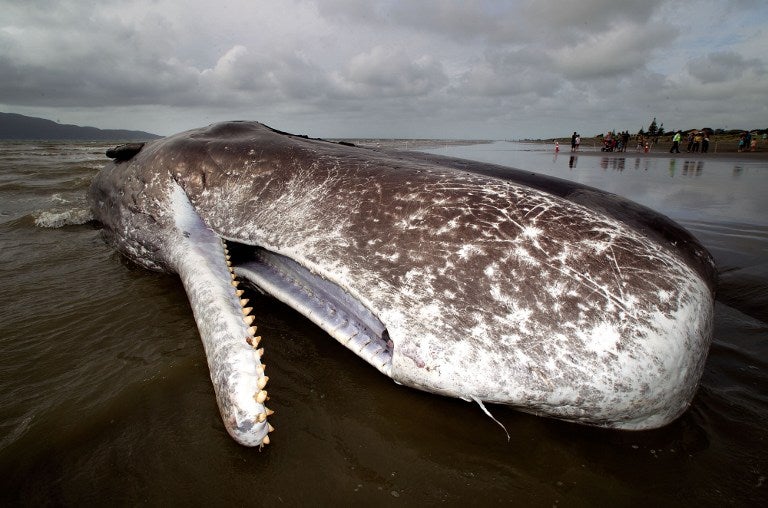 The dead body of a 15 metre sperm whale (C) lies on a Paraparaumu beach on the Kapiti Coast in New Zealand. AFP

When sperm whale clicks, is it culture?

Sperm whales create social cliques based on a shared dialect of vocal clicks, evidence that humans are not alone in having culture, according to research published Tuesday.

Combining data gleaned from decades of field observation and computer models, the study suggests social learning, rather that genetic transmission, explains how these giant sea mammals cohere into distinct “clans”.

They have also determined that these highly intelligent creatures, boasting the largest brains in the animal kingdom, interact most frequently with other whales using a shared dialect.

“It is quite rare to find groups of animals of the same species in the same area with unique behaviors,” said lead author Mauricio Canto, a biology professor at Dalhousie University in Halifax, Canada.

“What we didn’t know, was how these different sperm whale ‘dialects’ evolved,” Canto told AFP.

It might be chance variations, or genetically imprinted patterns passed along to offspring.

But Canto, building on previous work, suspected it was something else: whales learning directly from their peers, especially those closest to them.

To test his theory, Canto and colleagues fed 30 years of field work on sperm whales living near the Galapagos Islands into data-crunching computers.

“Basically, we translated all we know about sperm whale biology into computer models, which simulated the life of different whale populations over time,” he explained.

The researchers devised 20 different scenarios that might generate codas — based on genetics, learning, even random improvisation — and then let each virtual whale population evolve over thousands of years.

“Computer models help us make an informed guess of what has generated clans of whales with distinct ‘dialects’,” he said.

The results, published in Nature Communications, all pointed in the same direction: the formation of whale communities with a common dialect was rooted in “behavior that is socially learned and shared with a subset of the population”.

As it turns out, this is also one definition — albeit a broad one — of culture, thought by many to be a unique and defining characteristic of the human species. And that’s where opinions divide sharply.

Over the last 15 years, another kind of “culture war” has pitted experts, notably anthropologists, against a small but growing band of biologists on the question of whether whales, dolphins, great apes, elephants and some song birds could be said to have culture.

Most of the debate revolves around how you define it.

“We do not suggest that animal cultures are the same as the diverse, symbolic and cumulative human cultures,” Cantor said.

“But like us, animals can discover new things, learn and copy things from each other, and pass along this information over generations.”

Other research, for example, has shown that the complex songs of humpback whales — different across regions — change so quickly over time that only learning can account for it.

And orcas, also known as killer whales, have been observed teaching each other hunting tricks.

However it is defined, research on shared learning among animals also raises the intriguing question of how culture, and not just environmental pressures, can shape long-term evolution, researchers say. TVJ