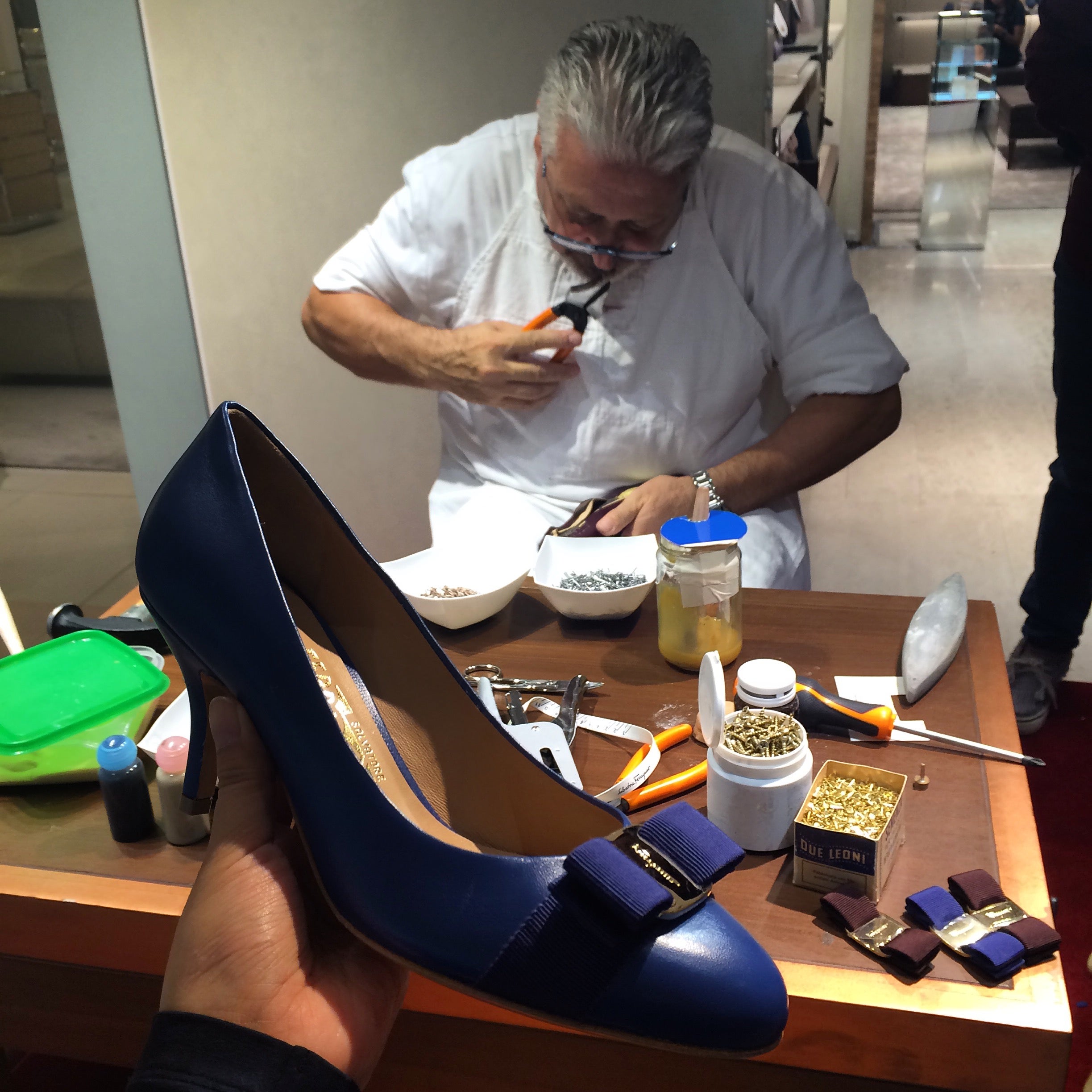 Ferragamo cobbler Floriano fishes a nail from his mouth with his pliers. At foreground, a Carla pump made by Floriano.

Master Italian cobbler demos how a Ferragamo shoe is made

There were audible gasps as the salt-haired man suddenly popped several tiny nails in his mouth. One by one, he fished the nails with his pliers, and proceeded to hammer the aubergine leather insole to the shoe last.

He did this so quickly—repeatedly—like second nature. That’s because the gentleman, introduced only as Floriano, had been doing it for the last 50 years, since he was a young boy in his hometown of Florence in Italy.

The last time Ferragamo held a demonstration of its shoemaking techniques in the Philippines in 2012, another Italian cobbler’s skills attracted such interest (nail-popping included) that the legendary brand vowed to bring it back. It held such event yesterday at the Ferragamo boutique in Rustan’s Tower.

Shoemaking is a revered tradition in Italy, a skill passed down through generations. The Ferragamo founder himself, Salvatore Ferragamo, was a shoemaker to Hollywood stars in the 1920s, but chose to return to Florence to build his company in 1927.

The cobbler Floriano, like many others in the company’s Florentine workshop, go through years of training. His interest in the craft began as boy, as he passed by a cobbler’s workshop on the way to school every day. When he finished school at 16, he asked his parents’ permission to train as a cobbler. His brother would also become a shoemaker.

For years, the bespectacled Floriano worked in his own factory, until 30 years ago when he joined Ferragamo. While his own son is pursuing other interests, this master craftsman trains younger cobblers at the Ferragamo workshop.

All Ferragamo shoes are made in Italy, in assembly lines of both company-owned workshops or outsourced in trusted affiliates of the house. While Floriano seemed able to create a half of a Carla—a low-heeled pump bearing the same grosgrain ribbon and metal plaque as the classic Varina ballet shoe—in less than an hour, it actually takes 3-4 days to make a pair and a few days more to dry before it can be ready for the retail floor.

Owing to the brand’s efforts to capture a younger market, it has evolved its look to include fashion styles. But for its longtime and loyal customers, they still go for the comfort and classic sophistication of the Varina and its low block-heeled sister, Vara.