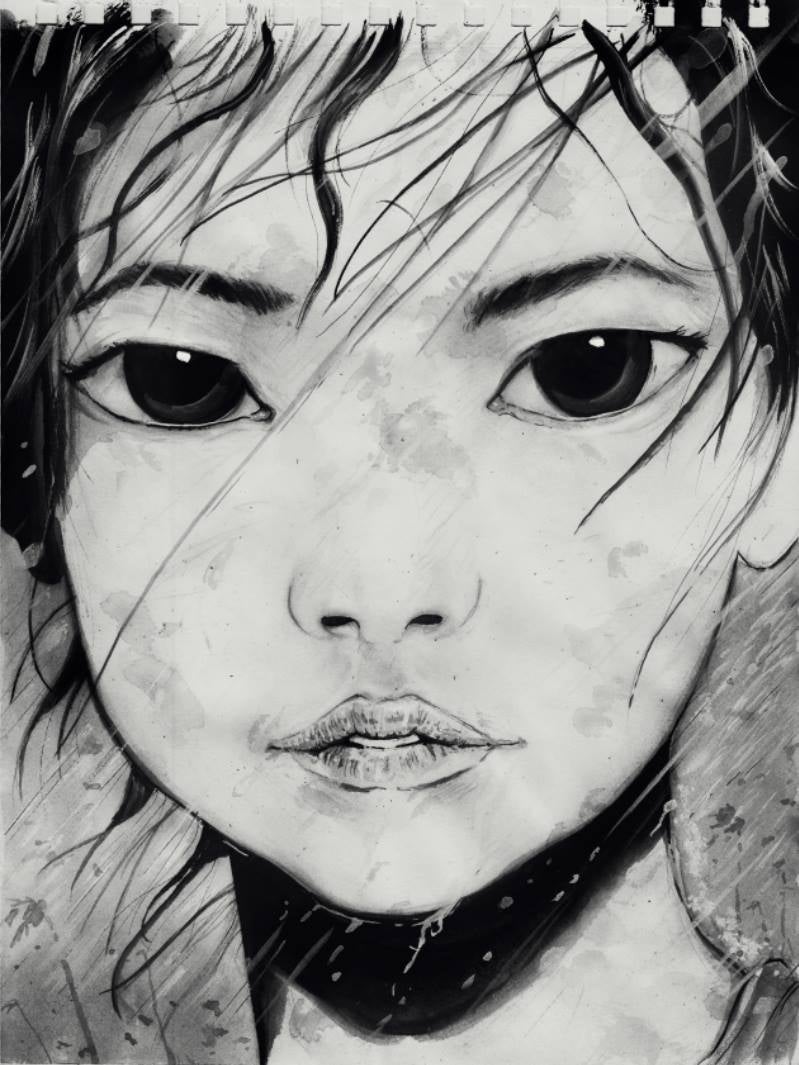 HAND-DRAWN portraits of children called “Beauty of Survival” will soon be published in a coffee table book.

He helps kids cope with trauma through art

NIKOLO Salazar recalls his experience at the height of Supertyphoon “Yolanda” (international name: Haiyan) and its aftermath: “Every day we had to search for food. Money didn’t matter. It was all about survival. We were all back to
zero.”

He says he and his family were lucky to have been spared: “I thought that the whole world was affected—that it was the end.”

After the calamity, he suffered even greater trauma when he saw dead bodies along the road. “They were all piled up,” he recalls. “I initially thought to myself that life, as it is, is what you have. It is fragile and you just have to make the most of it depending on circumstances.”

This Tacloban-born artist has always had a knack for painting. As a young boy, he would draw human figures, animals and airplanes on the walls of his parents’ bedroom.

In college, he enrolled in Bachelor of Arts in Animation at De La Salle–College of Saint Benilde. He further honed his skills in an intensive seven-month course in computer graphics in Cebu, as a scholar.

But beyond the formal education, it is perhaps his real-life struggle that led him to become an artist not just for himself but also for his community.

Yolanda—one of the world’s strongest tropical cyclones—hit the country in November 2013.

At 24, Nikolo looks back on that life-changing experience. Pondering the fragility of
human existence, he decided to focus his creative process on making art more meaningful to people around him, particularly children.

“I think I took a leap of faith to devote myself to teaching and practicing,” he says.

After surviving Yolanda, Nikolo, who often explores the dark and the mysterious on canvas, now employs more light on paper and captures resilience in many forms.

This shift led him and a network of equally passionate individuals to create Art Road Inc., a social enterprise which supports children in pursuing college.

Art Road focuses on kids who lost their parents during disasters, as well as physically challenged youth who nonetheless have the capacity to pursue higher education.

By producing and marketing art, Art Road hopes to raise funds for these kids.

A coffee table book, now in production, best describes where Nikolo is right now as an artist. Titled “Beauty of Survival,” the book has a compelling series of hand-drawn portraits of children.

Through a mixed media of charcoal, watercolor and oil, as well as analog and digital tools, “I taught them how to express their traumas,” he says.

He noted a common thread in their stories: “A lot of them have something to prove and want to fulfill their dreams.”

By empowering kids to express themselves, Nikolo learns more about art and its importance.

“If you’re a man of the arts, it’s easy for you to understand things in life.” he says. “Whether it’s trauma or difficulties that you’re going through, you can interpret them creatively. I learn a lot in terms of understanding individuals. Art, to them, becomes the exit from turmoil.”

For Nikolo, art isn’t just a pretty picture. “We do this because we want to help ourselves and to enrich our minds,” he says. “It’s therapy with an output that reminds you of your process. It inspires you.”

Nikolo says he will always remember a 10-year-old student who used art to survive an emotional turmoil. The kid went through severe trauma after finding out that his beloved friends perished from the wrath of Yolanda.

“My only wish for the kids is that they find their passion and continue doing that for the rest of their lives—with art being their greatest companion along the way,” Nikolo says.

He is also active in disaster response mobility that concerns children—like initiating activities for child-friendly spaces (CFS). Especially created by nongovernment organizations (NGOs) to help children cope with trauma, CFS is an integral component of emergency response to calamities.

When not working closely with NGOs or teaching art to kids in workshops, he co-handles Wolfpac Films, a film production outfit where he is producer and film scorer. He also acts, draws, animates and composes.

Now, nearly two years after Yolanda, the artist is back on his feet with a new resolve. “I’m just going to love life every day,” he says.

“We do not run out of questions to ask ourselves,” he reflects on life’s challenges, “but as long as we’re doing the things that we want to do, no matter what happens, we will always arrive at good answers.”

(For more information on how you can be involved with Art Road, visit
www. facebook.com/pages/ArtRoad-Inc
/975755452446084 or Nikolo’s page www.facebook.com/NikoloArt.)