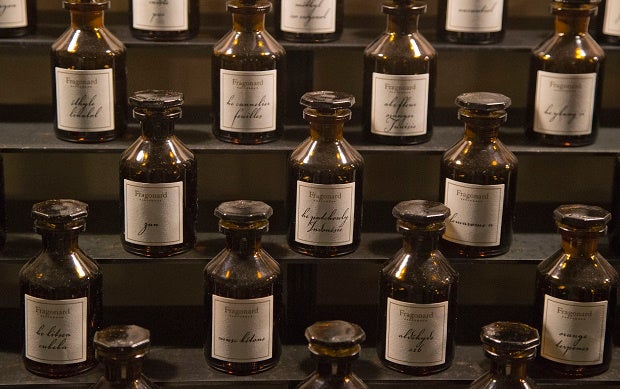 Bottles of perfume are displayed at the Fragonard perfume museum in Paris, France, Friday, Sept. 11, 2015. A sprawling building, once home to a lewd Parisian theater and later a chic velodrome until the 1890s, was renovated for two years to showcase the unique history and techniques behind the creation of perfume. AP

The sprawling building — once home to a lewd Parisian theater and later a chic velodrome — was renovated for two years to showcase the unique history and techniques behind the creation of perfume.

“The idea is to share our savoir-faire. It makes everyone dream. France is reputed for perfume, so our aim is to share the treasures we have accumulated,” said Agnes Costa Webster, great-granddaughter of Fragonard founder Jean-Francois Costa, who delved into the family’s vast collections to create the museum.

She unearthed hundreds of art objects, exotic vials, age-old distilleries and olfactory apparatus that are now presented to the public, many for the first time, alongside black-and-white archive footage.

Aside from the history, a new major museum — now among several other smaller museums in Paris dedicated to scents — demonstrates both perfume’s increased popularity and its status as the financial backbone of today’s globalized luxury industry.

“There are marvels in the contemporary perfumery creation,” Costa Webster said. “I think this is an art which will never end.”

The museum shows the twists of fate and history that shaped the olfactory art form.

Vials and trinkets trace how perfume went out of fashion in the Middle Ages but reached a new high in the 15th century, when Frenchmen, fearful of diseases in the water, refrained from washing and relied on perfume to hide bodily odors. By the 18th century, trendsetter Marie Antoinette was dictating what scents were in vogue — she preferred floral notes — and bottles reached the height of ostentation. One scent bottle from England had delicate gold and crystal dating from 1760.