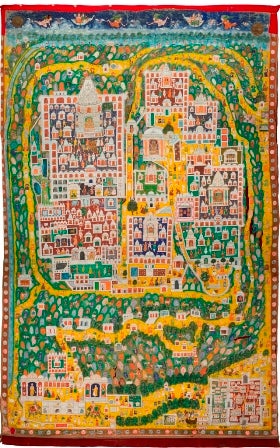 A collection of 72 ancient Indian maps of pilgrimage routes and temples chronicles the art of map-making and its relevance in the contemporary world of technically–aided aesthetic.

The scale does not matter because the work of art is a map. The focus is the experience and not the exactness of distances between two places marked on it.

The trajectories of a nation’s evolution and physical existence have always been defined by maps — since the first visual representations of the world appeared around 5-6th century BC based on a paradigm of a flat earth.

The map — more often — for the cartographer and the viewer concerned transcends the boundaries of terrain to become a work of art depending on the creativity that factors the spatial and the aesthetic dimensions of the visuals and the refinement of execution. A colorful physical map of a place is always a joy to behold.

Seventy-two such vintage maps of India are currently on display at the National Museum in New Delhi. Mounted by the Kalakriti Archives based in Hyderabad in Andhra Pradesh, the show titled, “Cosmology to Cartography: A Cultural Journey of Indian Maps” gives the visitor fresh opportunity to understand the evolution of the ancient art of map making and its relevance to contouring the progress of Indian culture — a legacy of 5,000 years beginning with the Indus Valley Civilization.

Spanning 400 years until the early 19th century, the narrative of these maps broadens through the transition of cartographic depictions of the ancient European conception of the Indian subcontinent.

”In India, indigenous maps of the yore have in fact been a genre of painting,” says the owner of Kalakriti Archives, Prshant Lahoti, who has been collecting historical maps for the last 12 years.

“The key idea of the exhibition at the National Museum is to present landmarks — mostly temples — along a certain timeline which can then be followed when you visit the holy places,” Lahoti said, enumerating the focus of the exposition.

Lahoti, one of India’s leading cultural protagonists, manages his family’s business of promoting arts and heritage across the country. He has contributed 70 of the 72 maps from his family’s collection of a vast trove of heritage memorabilia.

Vivek Nanda, one of the two curators of the exhibition, explained that the pilgrimage maps customarily tend “to grade the sizes of the shrines, deities and other landmarks according to the importance of sacredness”.

“That is often decided by the artist painting it,” the London-based Indian curator said.

For instance, a pilgrimage map of the Himalayan river Alaknanda marks the holy places along the banks flowing down the Garhwal belt of the Lower Himalayas in order of significance.

Painted by a Rajasthani artist in the early 18th century, the rectangular 39.5 x 223 cm map is read from left to right. It is plentifully supplied with inscriptions, names of sacred places, villages, mountains and even trees. As most of the action is subsumed into the right bank of the river, the landmarks on the left bank are depicted upside down.

“Actually, the scroll is in three sections. At the museum, we have presented the second and the third sections of the scroll,” Nanda said.

An eminent urban planner, architectural historian and collector trained in India and Cambridge University, Nanda said the “map of the Alaknanda traces the growth of river pilgrimage in the Himalayan region in phases, changing with the nature of the river as it flows down the headlands to the maturity on the plains”.

The smaller shrines in the upper reaches give way to more complex pilgrimage centers and well-planned towns in the wider river valleys below.

“The first scroll shows the river branching out as it does in Haridwar, a popular pilgrimage town which hosts religious festivals like the Kumbh Mela.

The second section begins at Deoprayag, marking Josigaon and Josimath villages besides the temples of Thakur (Krishna), Lakshmi (an Indian goddess of wealth), Narasimha (an avatar of Vishnu) and Mataji (a female mother god).”

Even the topographical information is not to be taken “literally on this route map,” Nanda said. For instance, Karnaprayag is depicted before Shrinagar (in Uttarakhand), which is considerably farther upstream.

Interestingly, the Badrinath shrine is depicted in a typically Rajasthani way with a domed “mandapa (umbrella shade)” — an architectural component typical of temples in the desert state of Rajasthan.

The largest map in the exposition features a late-19th century depiction of “Satrunjaya Patha” — a 455 x 303cm work of opaque watercolour on cotton from Rajasthan.

The Jain site of “Satrunjaya (modern town of Palitana in Gujarat)” then in Rajasthan — provides a panoramic view of the key shrines, besides the pilgrimage routes and details of significant features and episodes that occurred throughout history along the path of the devotees.

“In fact, such maps also serve as surrogates for those — often aged or infirm devotes — who are unable to visit the sites,” Nanda said.

Two similar works from southern Rajasthan’s Sirohi district, dating back to 1750 — and another from mid-19th-century Gujarat, are like detailed visual guides to those who are unfamiliar with the terrain and those who choose to learn about Indian spiritual heritage from home. The picture postcard quality of the maps elevate them to “complex works geometric art”.

“Their display on festivals and special occasions provide the same merit as having visited the site,” curator Nanda said.

The maps traverse the diameter of the country from west to east. A visual showing the cosmic geography of Puri, an eastern pilgrimage town in modern-day Odisha, envisages the sacred area of the town being in the shape of Lord Vishnu’s conch (shankha) with the temple in its heart. The 83 x 137 cm gouache-on-cloth map is believed to have been painted between 1870 and 1875.

A “pichhvai” painting — a traditional style of art associated with the Krishna culture that flourished on the banks of the Yamuna river in Mathura and Vrindavan — depicts the pilgrimage landscape of Vraj, a district around Mathura.

The 290 x 290cm work from the mid-19th century features the sacred sites connected to the mythological hero Lord Krishna’s boyhood and the discovery of the “Shrinathji” image — a blackstone manifestation of the lord embellished with colourful painted motifs.

The map from Nathadwara, a shrine located on the banks of the Banas along the Aravalli Hills, shows the route for the annual religious procession or “Vraj Yatra” that devotees of Lord Krishna undertake. “It last for several weeks,” curator Lahoti said.

Another map laying out the plan of the Shrinathji temple in today’s Rajsamand district of Rajasthan shows the temple complex as a series of courtyards (including shrines, palaces and services rooms) within a bastioned boundary wall with one main gate in the heart of the town.

The early-20th-century “pichhvai simhasan” (throne cloth) map, usually draped on the king’s chair, assembles motifs from the architectural tradition of a large Rajasthani mansion —referred as the “Nathdwara Haveli” — by devotees.

The maps on display are both sources—painted and printed, produced in the subcontinent and in Southeast Asia. They are curious cryptic codes of original manuscript and iconic representations of places from another era — a separate oeuvre in itself that have remained out of the purview of mainstream Indian.