Skin-care products for HPG; what next, lipos? | Lifestyle.INQ ❮ ❯ 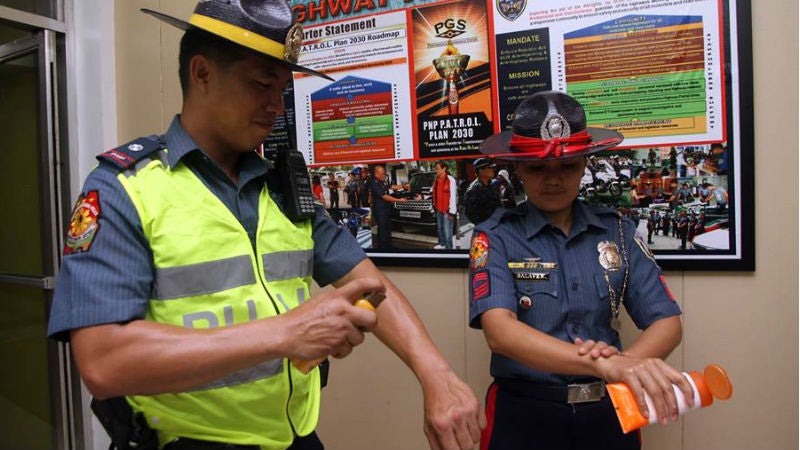 Skin-care products for HPG; what next, lipos?

Skin care products have been donated, hopefully, a sincere gesture to help and not just a marketing gimmick.

Will a tummy-tucking procedure be far behind?

Days after the Philippine National Police-Highway Patrol Group (HPG) appealed to the private sector for material support following their deployment to six choke points on the perennially congested Edsa, a dermatologist checked off one of the items on the HPG’s “wish list.”

Vicki Belo, a dermatologist to the stars, has donated skin-care products to the new guardians of Metro Manila’s primary highway.

The HPG director, Chief Supt. Arnold Gunnacao, included last week sunblock among the things the public could donate to HPG members, citing the need to protect the traffic enforcers from ultraviolet rays.

On Monday, Belo and her daughter Cristalle Henares answered Gunnacao’s appeal with 170 sets of not only SPF 60 spray-on sunblock, but also SPF 30 kojic lotions and whitening soap, with different formulations for men and women.

Belo committed a yearlong supply of the skin care set for the HPG personnel on Edsa.

At the turnover ceremonies in Camp Crame, Quezon City, Belo thanked the HPG for easing up traffic in the metropolis.

She said she herself was “very affected” by the traffic congestion on Edsa, as it depleted her of energy while making the rounds of her clinics in the metropolis.

Belo said she was losing patients as they were no longer going to the clinics to avoid traffic jams, a loss she believed was happening to other establishments.

“I think it’s had a very bad impact on the economy,” Belo said of the Edsa traffic jams.

“When we heard that the HPG will be taking over, we know that they are well-trained and they have the authority. You know Filipinos, if we can get away with something, we will. But I think HPG members are more respected and they will implement the rules [fairly],” Belo said.

Cristalle said she had been feeling the HPG’s presence on Edsa for the past week, noting the shorter travel times between places.

“Thank you from the bottom of my heart. Like mommy said, you’re so blessed to have Belo bless you. But it’s the other way around. We’re so blessed to feel your presence on the road every single day,” she told the HPG personnel.

Gunnacao expressed thanks to the mother-and-daughter team for the donation and for the “protection on the street, particularly from…skin cancer.”

“Always maintain the beauty of men in our streets so all who pass them by would smile,” Gunnacao told his personnel.

“We’re thankful to the Belo group for giving us skin-protection products. We appreciate their concern for the HPG and we will distribute [the materials] Asap. We also welcome donations from other companies,” Tanseco said.

Gunnacao said the HPG still needed face towels and mattresses because the group had turned its training center into a makeshift dormitory for additional manpower from regional police offices. Earlier, Gunnacao requested water jugs and vitamins.

Over the past week, the HPG has already received donations of tents, rain gear and flashlights.

Tanseco has praised the outpouring of public support as a show of bayanihan (team spirit). “Our personnel really appreciate it,” he said.

And for those wondering if sponsored liposuction procedures from Belo are in the works, don’t count on it. Belo seemed impressed enough with the HPG personnel’s physique.

“I’m very proud of you because everywhere I look everyone has a flat stomach. Obviously, everybody is very conscious of how he looks. Looks really matter. First impressions really count so we see that you have the discipline to take care of your face and body. I think it’s a good impression for people to respect you more,” Belo told the HPG.