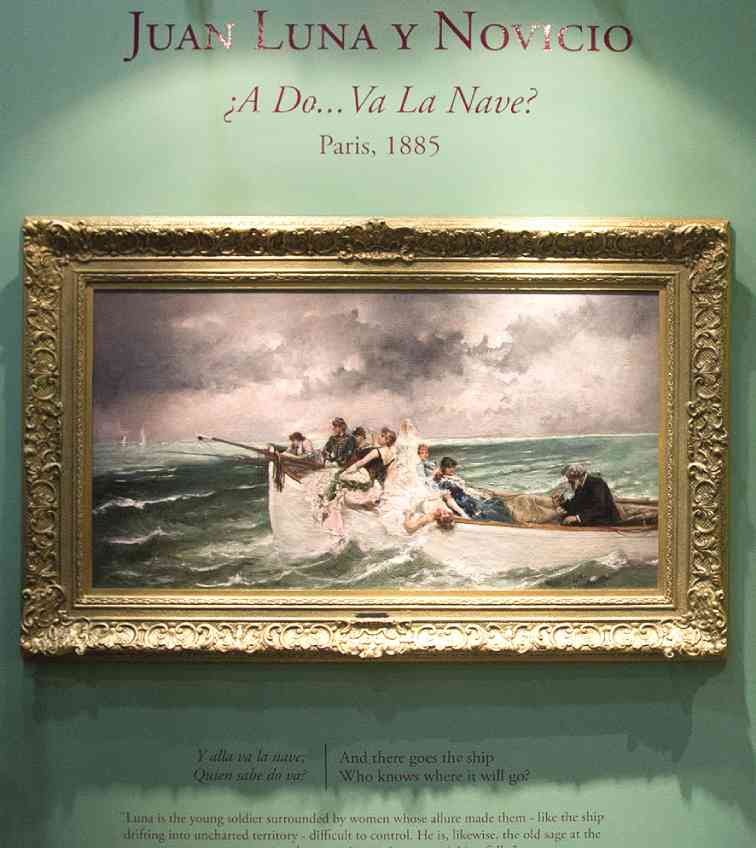 FROM PARIS to Cuba to Cordoba, now home inManila. This Juan Luna was painted a year after the “Spoliarium” won the goldmedal in Madrid. ALEXIS CORPUZ

Long-lost Luna, found in Argentina, goes up for auction in Manila

The current owner didn’t know who Luna was, and said his sister even thought of disposing the painting to turn its gilt frame into a mirror.

AN 1885 painting by Juan Luna which was thought to have been lost, but turned up in Argentina, is the centerpiece of an auction of important Philippine art, fine jewelry and watches, rare auto, and other antiquities on Sept. 19-20 in Kirov Lounge at Rockwell, Makati.

“¿A Do… Va La Nave?” (oil on canvas, 21½” x 41”) turned up at the doorstep of Salcedo Auctions cofounder and art advisor Ramon E.S. Lerma, from an Argentinean man who inherited the piece from his grandmother, whose husband received it from his friend and business partner in the late 1950s.

The giver was a man named Goar Mestre, a Cuban émigré who founded the first local TV station in the Argentine city of Cordoba with Jose Bonaldi, the grandfather of the painting’s current owner.

The Bonaldi scion didn’t know who Luna was, and said his sister even thought of disposing the painting to turn its gilt frame into a mirror, according to Lerma.

But seeing the inscription on the frame, the owner turned to Google and found the Makati auction house, which sold Lunas in its last two seasons. He e-mailed Lerma the pictures.

Lerma, who’s an art academic, said he knew instantly that the work was a Luna.

“If you see the brushwork, you’ll know that it’s a Luna,” he said. “The colors are Luna. If you see the hem of the dress with the flowers of blue and pink and green, it’s very, very Luna.”

In the auction catalog, it says that Salcedo Auctions’ specialist team had two theories as to how the Luna wound up in Cordoba.

First, through Luna’s brother-in-law, Felix Pardo de Tavera, who settled in Buenos Aires with his Argentinean wife. But that is if the piece was spared; it’s widely believed that the Pardo de Tavera family destroyed all of Luna’s works in their possession following Luna’s killing of his wife Paz Pardo de Tavera, and mother-in-law Juliana Gorricho.

Second, it could have traveled to Cuba, where Mestre came from, through Luna’s Spanish friend, Ramón Blanco, who was governor general of the Philippines before becoming captain general of Cuba.

Until its discovery, the existence of the piece was recorded only in a reproduction in a Barcelona literary journal from 1886.

The painting shows seven elegantly dressed women on a boat, a young soldier and an older man sketching. It’s signed “LVNA Paris 1885,” which means it was painted a year after “Spoliarium” won the gold medal in Madrid. It is valued between P9-12 million.

“It’s a touching tribute to the country that the owner decided to sell it here,” even as he also talked to auction houses abroad, said Lerma. “It’s exceedingly rare to find a work of Luna in this condition with this kind of subject matter. And it’s in pristine condition.”

The owner hand-carried the painting to Manila.

Alongside the Luna is an 1890 portrait of a little girl by his contemporary, Félix Resurreccíon Hidalgo, which was discovered in Madrid. It’s valued between P6-8 million.

Lerma is also hoping to match, if not surpass, the sales record set by a first-edition “Noli Me Tangere” from last year’s auction, which fetched over P7 million. This time, there’s a first-edition “El Filibusterismo” with a low estimate of P1.8 million.

For collectors of contemporary literature, there’s also a first-edition “Harry Potter and the Philosopher’s Stone,” valued between P150,000 to P170,000.

Dozens and dozens of fine watches from Swiss brands Rolex, Patek Philippe, IWC, Jaeger-LeCoultre, Cartier, Vacheron Constantin, Audemars Piguet and others are also on the block.

There are also several rare cars, displayed around the Rockwell area, which Lerma said is “the fastest-

While “important art” remains the highlight of Salcedo Auctions’ calendar, Lerma said there has been a growing interest in what the auction house calls “Connoisseur Collection,” which includes furniture (Philippe Starck and Frank Gehry chairs, for instance), porcelain, crystals and silver, as well as international art (there are two pieces by Joan Miró).

A pair of Waterford champagne flutes has the lowest estimate of all the items for sale, at P1,000 to P2,000.

Many of the art for sale are valued in the millions, but Lerma said he had “to be fair” in the valuation of the Luna.

“I get asked all the time why Luna is always considered the most valuable. It’s because we see him as someone who championed the cause of the Filipino overseas. If there’s discrimination even today, can you just imagine this indio in 19th-century Europe, what sort of life he must have had?

“If you see a lot of the other modern artists, they’re also gaining a lot of traction and fetching high prices,” he added. “When it comes to an estimate, there are many things to factor in, and a lot of it is what an artwork means to a society where it’s being shown. Besides Luna being an artist, he has the distinction also of being a hero.”

Ultimately, whether or not one has millions to bid for this Luna, Lerma said everyone is welcome to view it and the rest of the items for sale at the ongoing public viewing at Rockwell.