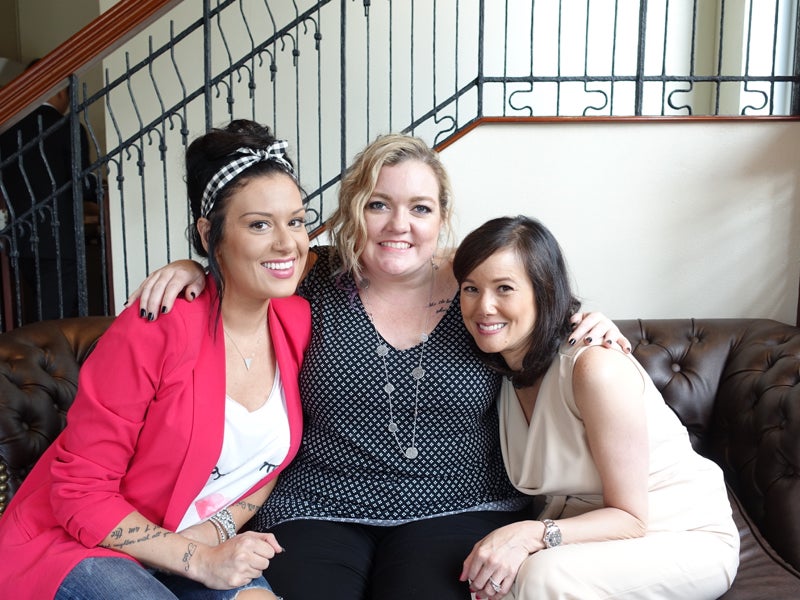 The Manila International Book Fair is back for the 36th time. Four hundred booths, 200 exhibitors, countless reading possibilities and of course, authors galore. Four authors flown in by National Book Store for MIBF include new adult sensations Colleen Hoover, Tarryn Fisher, and Christine Brae, a New York-based Filipino author writing under a pen name. Young adult author Kiera Cass is also back to promote “The Heir,” the fourth book in “The Selection” series.

Here are excerpts from Super’s Q&A with them. (And watch them play Truth or Dare with us in the video below.)

COLLEEN HOOVER: “The Philippines is my favorite trip so far; everyone’s really nice.”

Author Colleen Hoover always wanted to be a writer, and it was after hearing the lyrics “Decide what to be and go be it” at a concert that she finally decided to become one. “I decided to just go ahead and write the book even if I don’t do anything with it. I just want to write and finish it, so that’s what started ‘Slammed.’”

Do you have a favorite book from the ones you’ve written?

“Maybe Someday.” That book was so hard for me to write… to form this connection without being annoying through text message and Facebook messages and to make it flow seamlessly…and you’ve got the love triangle. I didn’t really want there to be a bad guy, it was hard to figure out how to end that in a way that I was satisfied with.

How did you end up collaborating with Tarryn Fisher?

Tarryn and I have known each other right after I published “Slammed” and we’ve been friends since. We tell each other book ideas sometimes and I told her about the idea for “Never Never” but I just had other books lined up, and she kept telling me “You need to write that.” One day she sent me the first chapter and she had written it and said, “I’m going to start it for you. Now finish it.” I thought that’s great, that’s a good chapter. I took the second chapter and wrote it from the guy’s point of view and sent it to her and we just wrote back and forth for six to eight chapters and decided, wow. We really like this, we should publish it. That’s how the book came about it, we just did it for fun.

TARRYN FISHER: “I feel like the Philippines can teach the world a lot about just how to treat people.”

New adult author Tarryn Fisher sticks to the adage “Write what you know,” and in her case, writing about what she knew involved a villainous woman and the incredibly intense and extremely complicated love story that changed her life.

What was the inspiration for “The Opportunist?”

I wrote “The Opportunist” as an apology letter to the real Caleb, because it was kind of my story and I was inspired by myself. When I write a book, I’m exploring myself in my writing and that’s who I was in my early twenties—I just told the truth about my thoughts, what I did.

If you really look at Olivia, she hates herself. She does. She sees the truth about herself, though. Leah was more blind to her flaws, Olivia knew what she was capable of. We all have roles in life, I’m a villain, I like to think I’m a kind villain, but I naturally veer towards the wicked things, like, I want to throw the phone in the lake, I wanna key your car, that’s my first impulse, and I have to say, “Tarryn, lead with kindness. We’re 30 now.”

Has the real Caleb read “The Opportunist?”

He’s married. He’s never read it. He knows I wrote it. I think it would be a painful thing.

What else are you planning to do while you’re in Manila?

We have three days later this week so I’m excited to see some other things but I’ve traveled all over the world and I’ve never met people like here, like these are the best people. No one ever gets mad at you, everyone’s patient and loving. I’ve never been hugged so much as I was yesterday. I’m a hugger and that was like, 500 hugs in one day, that was a lot. Why are you guys so happy and patient? I feel like the Philippines can teach the world a lot about just how to treat people.

It comes as no surprise to Christine Brae’s fans that the author of the romantic “The Light in the Wound,” “His Wounded Light,” and “Insipid” is Filipino (she uses a pen name). Brae is not actually a full-time novelist, nor does she want to be one. She just really loves to write.

She started testing the waters by creating a blog and decided to self-publish her first novel on Amazon. I just wrote then I said, “Bahala na, I’ll just write and see where it goes,” said Brae.

How do you juggle your career and writing books?

I have a very demanding day job. I don’t sleep. I’m just so lucky I have a husband who really helps me with the kids, living in the States you’re basically on your own and I have a job that has me traveling internationally quite a bit during the month. I take any opportunity that I can to write so from the hotel, on the plane… but once you get ideas in your head, you just basically run with it, it’s like your adrenaline’s going, right?

Do people at work know about your book?

I didn’t want anyone to know I was writing romance, so I didn’t really tell anyone. When they found out, they said “This is great, a left brain right brain accounting person, a CPA writing books, we want to promote it.” I didn’t feel right about it because I didn’t want to be in a meeting where people would be like, “Oh my god, she just wrote this romance book and here she is trying to act so serious and businesslike.”

Why did you choose Christine Brae as your pen name?

Brae is my husband and my kids—Bill, Raymond, Aurora and Eduardo—I put together the first letters of their names, but this will blow up soon, I mean I’m already commenting on my personal Facebook as the author and my husband’s already posting pictures, it’s a matter of time.

So your friends here don’t know about it yet?

This (signing events, MIBF) is like my coming out party, people from Assumption, La Salle are just finding out this week.

It’s funny. I was really scared. Obviously, the book reflects a lot of my life, when you’re in high school and college, everyone knows who your boyfriend was in college, so if they read this, they’re thinking it’s about this guy, it’s about that guy, I was really nervous.

Plus, this is a very conservative country so my titas, my cousins will read it, but so far they’ve been super happy.

What advice would you give for others who want to self-publish like you?