Elegant Filipinas, according to a legendary name among them: Tingting Cojuangco | Lifestyle.INQ ❮ ❯ 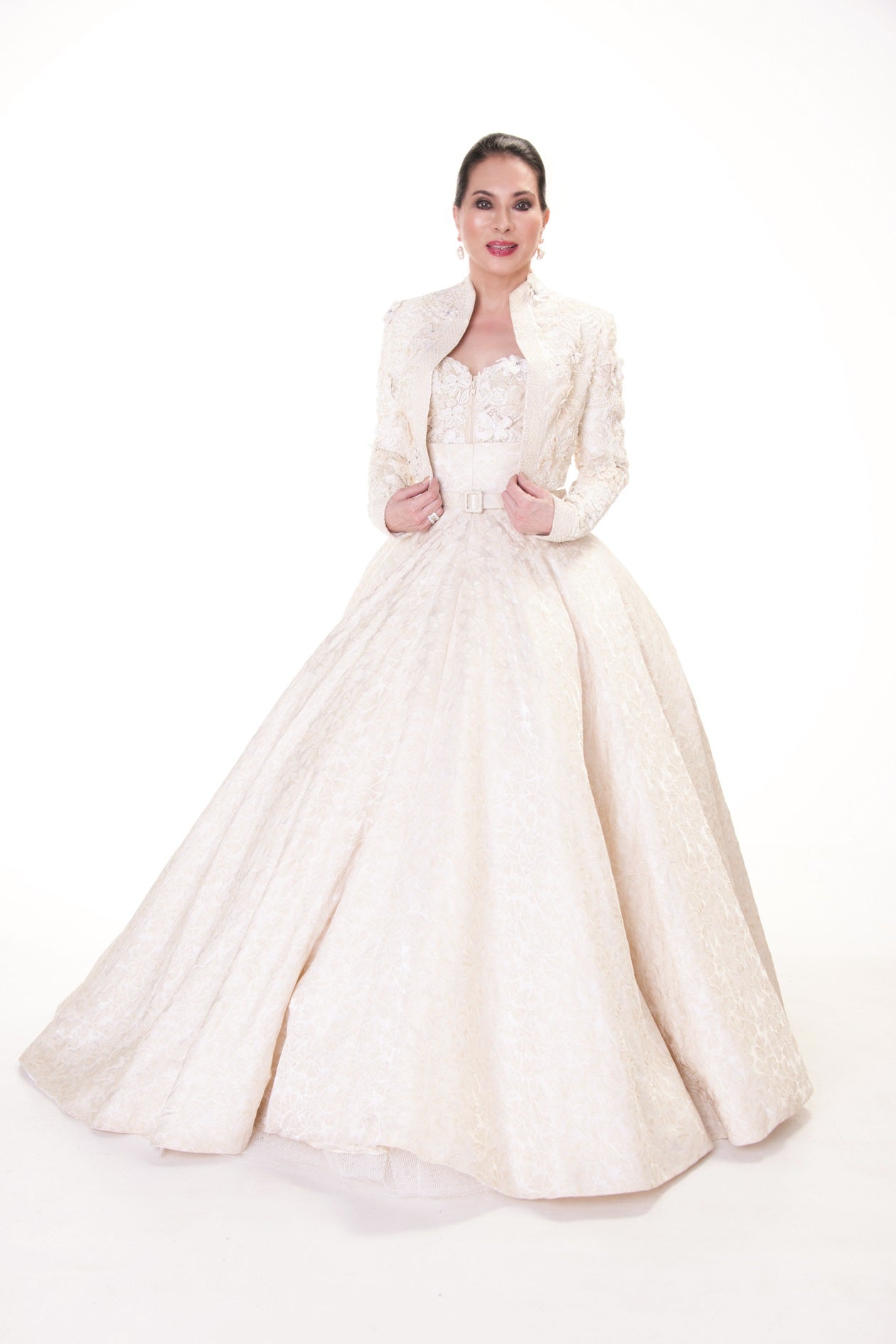 Elegant Filipinas, according to a legendary name among them: Tingting Cojuangco

She redefines “woman of a certain age” as “woman of a certain allure.” Style icon, author and former politician Margarita “Tingting” Cojuangco has basked under the klieg lights for five decades, yet her style hasn’t changed much. Her fashion choices have been understated and nationalistic, especially her collection of rare malong from the South.

For this interview, she was dressed in black long-sleeved, off the shoulder top, leggings and flat shoes. The no-nonsense color seemed appropriate in making a pitch for her event, “Tingting’s List: The Elegant Filipina.”

The invitational presentation will be held on Sept. 22 at the Diamond Hotel.

“Nobody has come up with a list on a personal capacity of elegant women,” said Cojuangco. “It’s always been about the best-dressed. There’s more to being best-dressed. Today, anybody can buy a dress and look good. In this event, nobody is paying to be part of it. I’m not selling tickets.”

She recalled the halcyon days of the ’60s and the ’70s, when stylish women were celebrated for their poise, confidence and refinement. Over time, good taste flagged and inappropriate dressing came in.

Cojuangco frowns on the wearing of halters and slippers in church, or of shorts that don’t fit women’s figure or age and the general lack of deportment she sees.

Her list holds examples of women with polish, intelligence, social graces and an advocacy.

“None of these women shout or call attention to themselves,” she said.

Tootsy Angara. At a young age, she was exposed to the tough life, having to live in a New People’s Army camp in the Cordilleras. But the experience prepared her for the rigor of campaigning with her husband, Sen. Sonny Angara.

Now a media executive, she is known to be one of the best-dressed political spouses.

Ching Cruz. Businesswoman, hostess and traveler, she keeps up with her commitments while looking ever fresh and pulled-together in a balanced and subtle outfit. She can tweak a classic look with a powerful accessory. “She doesn’t talk ill about anybody and she’s patient,” Cojuangco added.

Gwen Garcia. Cebu’s first female governor and now congresswoman, she has maintained equanimity in a challenging political career. She knows how to dress for every situation and stands out in her simplicity. Her wardrobe ranges from solid-colored basics to a few soft prints.

Lucy Gomez. The former commercial model and style sophisticate evolved into the hardworking congresswoman of Ormoc, Leyte. Composed, practical, neat and detail-oriented, she takes a demure approach to dressing, which makes her unique. “She has retained the mystique of who she is,” said Cojuangco.

Zelda Kienle. The former dancer has maintained her svelte figure and feline grace, which allows her to carry off almost any kind of ensemble with flair. Aside from natural beauty, she’s got the brains that’s helping move the family furniture business forward. At work, she takes a pragmatic approach to dressing.

Fortune Ledesma. Although she’s often in the best-dressed list, she’s also known for organizing events in the diplomatic circle and for strengthening the ties between the Philippines and Monaco, of which she is the honorary consul. She’s one of the few women of a certain age who can get away with bare shoulders and short skirts and still look dignified.

Amparito Lhuillier. Married to Michel Lhuillier, one of Cebu’s most affluent businessmen, she balances her family life with managing her jewelry business and foundation. Amparito patronizes Cebuano designers, including her daughter Monique Lhuillier, who brings out her feminine and romantic style.

Mandy dela Rama. The inimitably stylish designer of children’s clothes always likes to take risks in dressing up. She’s also the edgiest dresser on the list.

Cindy Yang. She’s a dedicated mother first, but she manages to delightfully surprise people with her versatile chic.

Vicky Zubiri. Designer-turned-painter Vicky has survived brain surgery with an indomitable spirit. She works out every day to stay in shape. She’s never underdressed and always looks sharp in any situation.

Cojuangco has her own credentials. She was one of “The 100 Most Beautiful Women in the World” named by Harper’s Bazaar in 1967, was a Tarlac governor (1992 to ’98) and president of the Philippine Public Safety College.

Asked how she finds women dressing up today, Cojuangco replied, “Not acceptable and not elegant. Less material is used to make shorts. A skirt makes you more of a lady.”

She admitted that her style of dressing hasn’t changed. When her daughters planned to take tours in Spain, Liaa, her eldest, teased her. “Mom, your skirts won’t fit into our knapsack and we won’t carry it for you.”

For decades, Cojuangco favored white shirts and khakis and simple, well-made tops with a balloon skirt and ballerina flats.

The habit of covering up was cultivated when she made frequent visits to Mindanao for her graduate and doctoral researches and theses. She then developed another style, wearing malong with chunky accessories.

In 1962, the then-18-year-old model married José Cojuangco Jr., who hailed from one of Tarlac’s landed families. (He is now president of the Philippine Olympic Committee.) During martial law, the Cojuangcos resettled in Manila, where Tingting completed her college degree in Oriental history at Assumption.

She had always been interested in Mindanao, but in the ’80s, there was little research on Muslim culture. Since flights were erratic, Cojuangco frequently traveled to Sulu and neighboring provinces by motorboat.

When Cojuangco acquired her master’s degree in Philippine history at the University of Santo Tomas (UST), her thesis was about the battle of the Samals in Tungkil Island, Sulu.

Years later, she took up her doctorate in Philippine history, also at UST, and wrote her dissertation on “Samals in History and Legend.”

“I concentrated on Samals because they were the greatest pirates in 17th century. Yet they occupy little space in history. They are a peace-loving people,” she said.

Cojuangco has published nine books about the history of prewar Tarlac, the Philippine Constabulary, the Moro Islamic Liberation Front and her travels to Mindanao.

Her professor was so impressed with Cojuangco’s diligence and adventurous spirit that he suggested she study at the National Defense College of the Philippines.

“Crime can be related to Philippine history. When you take it in the context of what people were before and the kinds of crimes in the past as opposed to the crimes of today, there is a big relevance to the psychology of the Filipino,” explained Cojuangco.

With her credentials—a master’s degree in national security administration and a Ph.D. in criminology at the NDCP, Cojuangco was appointed by President Gloria Macapagal Arroyo as Interior Undersecretary for Special Concerns and Muslim Needs. She was also named president of the Philippine Public Safety College.

In the past few years, she has been guiding police in doing their thesis requirements at the National Police Training Institute. In the cadetship program, she became close to some soldiers who later became part of the Special Action Force killed in Mamasapano. It has been her advocacy to provide some financial assistance to the victims’ families.

Asked why the turnaround from the catwalk to appearing in rallies, she replied, “You can’t be what you are forever. There is a life span to being a model. Beauty fades. What you have in your heart, spirit and head stay forever. You need knowledge. You can’t be a beautiful face or an elegant woman without being wise or intelligent. It’s an evolution of what you are, a reinvention of the self.”

Does age matter to her?

“Yes, it matters to me. When people say that it doesn’t matter how old you are, it’s only a number, that’s a lie,” she said with a giggle. “I never say how old I am.”

Has she undergone plastic surgery? Or would she go through it?

“Anybody should undergo plastic surgery if it gives her confidence. But we have to choose good plastic surgeons. Sometimes you rely too much on the opinions of friends or surgeons. We are meant to look Oriental, not Americans.”

Vitamin C and E, hyaluronic acid and sunscreen are her best anti-aging solutions, she said.

Ultimately, elegance is about knowing who you are and being useful to society, she said.

“I’m doing a show because I want people to be educated on elegance. Every woman should work and have a cause.”