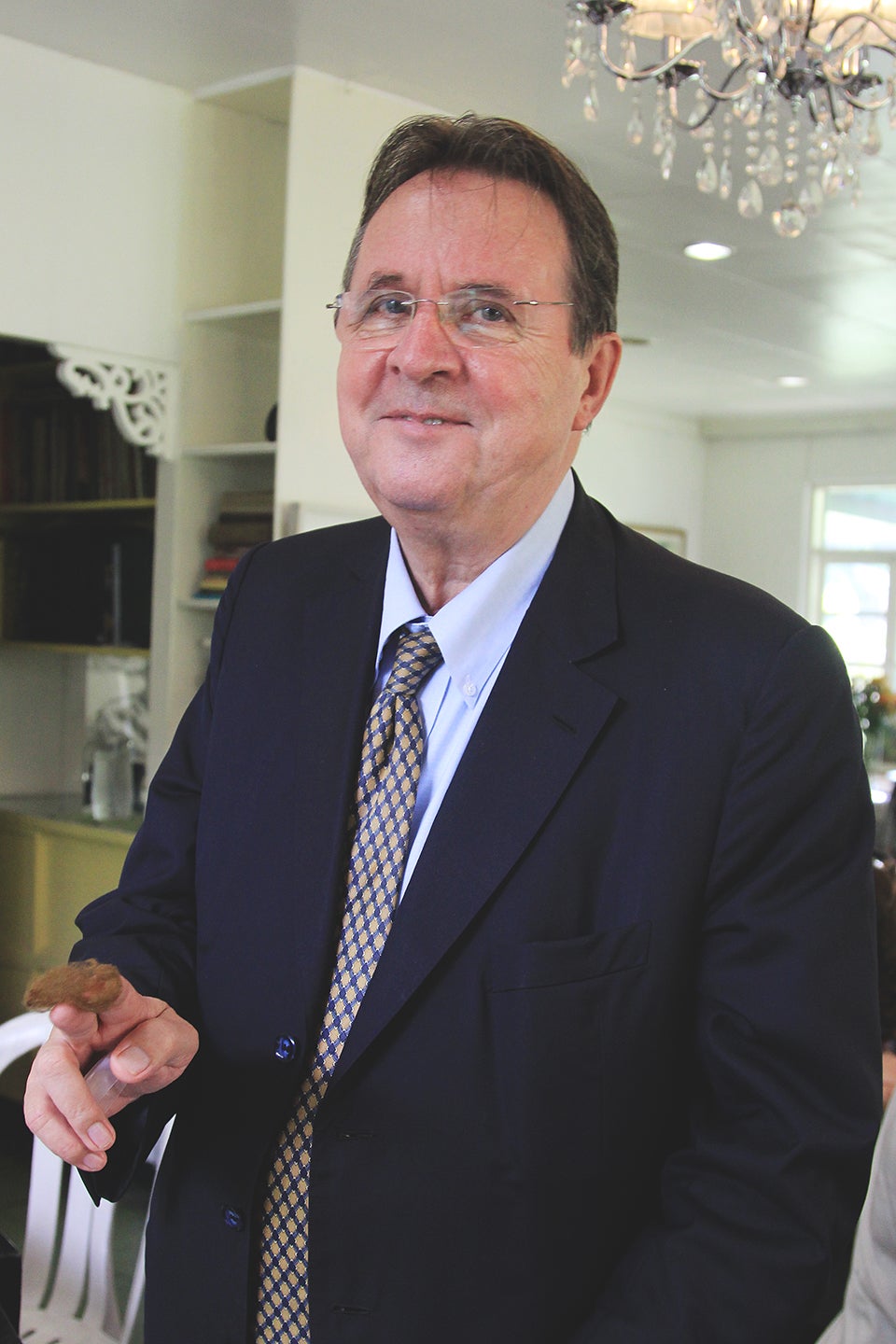 Best-selling German investigative journalist and author Paul Badde has come to the Philippines to attend the first anniversary of the enthronement of the replica of the “Holy Veil of Manoppello,” a piece of cloth dating back to the earliest Christian era that is said to bear the image of the resurrected Jesus Christ.

The replica is enthroned in the poor parish church of the Immaculate Conception in Nampicuan, Nueva Ecija province. It is the only officially approved replica outside of the Basilica del Volto Santo (Basilica of the Holy Face) in Abruzzo in the Apennine mountains of Italy. It is also considered a second-class relic since it was made to touch the original Veil.

Badde, a veteran journalist who worked for 18 years with the Frankfurter Allgemeine and who has covered Jerusalem and the Vatican for Die Welt, has written several investigative articles and best-selling books on the Shroud of Turin and the Veil of Manoppello, article of clothing of very ancient materials that inexplicably bear uncanny images that Catholic tradition holds to be the face of the Christ. They’re believed to be the burial shroud and the facial covering of Christ in his tomb after his crucifixion and death.

The images have confounded scientists and experts, and even divided the Catholic church between the devout who venerate them and the skeptical and the modern-thinking who believe they bring the institution back to a despised era of superstition and old wives’ tales.

But Badde, 67, said he is convinced the articles are authentic and he expressed excitement at having come to the Philippines to view the replica of the Veil of Manoppello, whose rediscovery and growing contemporary renown he has played a no mean part in.

“This image is a miracle,” Badde said. “It contains no color. It seems to be painted with light. It does not talk yet it speaks from the eternal word of Jesus Christ. It’s a living image. There’s no better reminder of God’s mercy than his human face.”

Badde differentiated the Shroud of Turin as the burial shroud and the Veil of Manoppello as the facial cover of Christ. He further described the former as showing the face of the “dead Christ” and the latter as “the face of the resurrected Christ.”

According to the Easter account in the Gospel of John (chapter 20, verses 1-8), when the Apostles rushed to the tomb after Mary Magdalene frantically announced she had found the tomb “empty,” one apostle (traditionally believed to be John the Beloved or John the Evangelist, himself the “writer” of the Gospel) found the burial clothes and Simon Peter found “the cloth that had covered Jesus’ head not with the burial clothes but rolled up in a separate place.” (Italics the reporter’s)

As contrasted with the Shroud of Turin, the Veil of Manoppello, therefore, is the “burial veil” of Christ and consequently, after he rose from the dead, in Badde’s words, “the face of the resurrected Christ.”

Badde has written about the two celebrated relics in his best-selling books, “The Face of God: The Rediscovery of the True Face of Jesus” (2006) and “The True Icon: From the Shroud of Turin to the Veil of Manoppello” (2010), both published by Ignatius Press of San Francisco.

Badde said both articles of clothing came from the Holy Land and made of very ancient materials that scientists have established to be native to the geography and era of the early Christian era.

In the case of the Veil, it is made of “Byssus” or “sea silk” or “mussel silk,” a rare material usually found in the tombs of Egyptian pharaohs. According to Orthodox Sephardic Jew and medieval expert, byssus was also used in the making of ancient priest’s garments in the Jewish temple.

Badde said the Veil, therefore, could have been kept as relic by the earliest Christian communities in Jerusalem, and with the spread of Christianity and with the diaspora as a result of the Roman defeat of the Jewish rebellion, it was brought to Edessa and later Constantinople (today’s Turkey) during the Byzantine era, and due to the iconoclastic revolutions in the Eastern Church in the 8th century, brought to Rome for safety.

Badde said the Veil came to be known as the “Sudarium” or “burial veil” and the “Volto Santo” or “Holy Face.”

What is most remarkable, Badde said, is that the images resemble one another. “When the image on the Veil of Manoppello is laid over the image of the face on the Shroud of Turin, the two images match perfectly. It is the same face.”

The Veil was venerated as the true face of Christ for much of the Middle Ages as shown by countless copies in frescoes, mosaics and bas reliefs all over Rome and Europe and large productions by Italian, German, French and Flemish masters. One of the greatest Popes, Innocent III, Pope from 1198 to 1216 who recognized the Franciscans and Dominicans, wrote the hymn, the “Salve Sancte Facies (Hail, Holy Face).”

Badde said that when the St. Peter’s Basilica started construction in 1506, one of the founding pillars was planned to house the Veil.

But the Veil suddenly vanished perhaps during the flurry of construction of the new basilica and also in the chaos as a result of the sack of Rome in 1527.

Further Christian lore and legend later gave rise to the Veil of Veronica, which nowadays many Catholics mistake the Manoppello veil to be.

Badde explained that “Veronica” is actually a portmanteau of “Vera” or truth and “Ikon” or image. Hence, “the True Image.” Veronica therefore is an apocryphal character borne out of the Christian imagination formed by the most ancient but penetrating memory of the “True Face of Christ.”

Badde said the Veil was “rediscovered” in the 20th century in the village of Manoppello by the Capuchin priest Fr. Dominico Petracca da Cese, who died in 1978 while on a pilgrimage to the Shroud of Turin.

Top prelates of the Catholic Church started to visit the church where the Veil was kept and lent credence to its authenticity, such as Cardinal Carlo Mario Martini, the late Jesuit archbishop of Milan and a papabile in the 2005 conclave, and Cardinal Pio Laghi, the late papal envoy to the United States.

In 2006, Pope Benedict XVI went to Manoppello and prayed before the Sudarium. He proclaimed 2016 as the Year of the Great Jubilee of Divine Countenance.

Reports of miracles and spiritual conversions have been reported by those who have made a pilgrimage or who have venerated the Veil of Manoppello. Filipino expatriates and overseas workers from the United States and Europe started to conduct religious tours to the shrine so that in 2014, they were able to convince Capuchin priest Fr. Carmine Cuccinelli, rector of the basilica and guardian of the relic, to come with them to the Philippines to bring a replica for the veneration of the Filipinos.

When the replica was brought to the Philippines last year, Father Cuccinelli witnessed how thousands of Filipino Catholics flocked to the churches where it was exhibited in Makati, Quiapo and Lipa City.

The entire town of Nampicuan welcomed the relic with a three-mile parade that so moved the Capuchin monk he gave his permission for the relic to be enthroned permanently at the Immaculate Conception church.

During the enthronement, Bishop Robert Mallari of San Jose expressed joy Nueva Ecija was chosen to be the shrine of the relic.

“Why in this poor parish of Nampicuan,” he asked. “Why not in the beautiful cathedrals around the Philippines?” He then referred to the episcopal motto of Pope Francis, “Miserando atque eligendo”—“lowly yet chosen.”

“Christ has chosen to be with the poorest of the poor,” said Mallari.

Last Sept. 16, Father Cuccinnelli came back to Nueva Ecija to join the first anniversary celebration of the enthronement.

It was Badde’s first time in the Philippines and taking note of the tropical weather which he found pleasant and the “delicious” and “exotic” fruits his hosts had made him try, Badde exclaimed, “This is paradise.”

Badde and his wife will leave tomorrow for Rome where they’re based. He said he already had a title in mind for his new book: “From Manoppello to Nampicuan.”