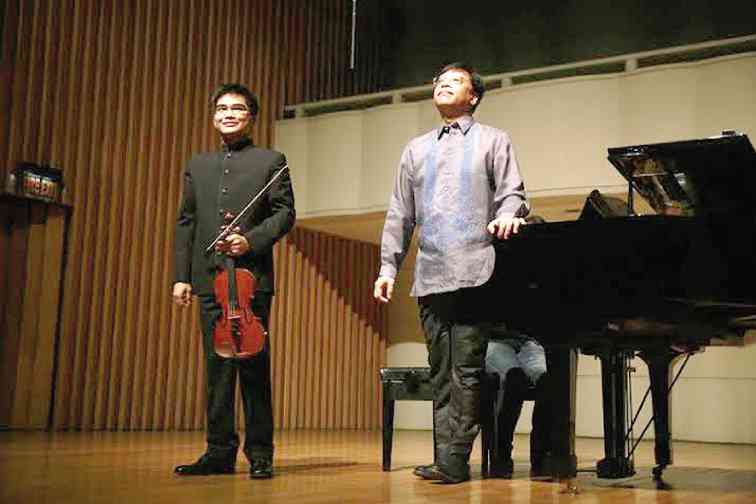 His kind of musicianship was easily evident in the unaccompanied piece, Ysaye’s Sonata No. 6 in E Major, Op. 27, obviously a piece that tests a musician’s sense of rhythm and harmony without an accompanist.

Always focused without losing the nuances of a piece, Gutierrez easily showed why he qualified in the competition.

The Ysaye piece, Chausson’s Poeme and Wieniaski’s Variations on an Original Theme were the evening’s most gratifying pieces.

But while the violinist easily stood out, the piano parts rendered by Greg Zuniega did not quite match the intensity of the recitalist.

The unevenness was particularly glaring in the Beethoven’s Sonata for Piano and Violin in D Major, Op. 12, No. 1. The composer wrote this piece in a manner that would bring out the best in the two instruments. Sadly, one soared and the other lagged behind

In chamber music, two instruments should complement each other, but in this recital, the level of playing was largely uneven.

Zuniega did not lack the tones needed to make chamber music rewarding, but he was obviously not responding very well to make his task go beyond accompanying.

He got all the notes right of course but was obviously wanting in discovering the music behind the musical notations.

Nevertheless, the recital showed a major talent in Gutierrez, who would no doubt be a formidable competitor in the latest edition of the JJIVC.

Out of over 200 contestants who auditioned for the 2015 JJIVC, only 39 qualified; one of them was Gutierrez.

He is going to prepare a large and varied program consisting of an entire Bach solo sonata or partita, an Ysaye solo sonata, a romance by Joseph Joachim, a modern work commissioned specifically for the JJIVC, and a 35-minute recital which includes a Beethoven sonata and a virtuoso piece.

“These are spread over two days,” Gutierrez said about the qualifying rounds. “Contrast this with the first round of another famous international violin competition which requires only two movements from a Bach solo sonata or partita, and three Paganini caprices. From a competitive standpoint, this makes it much more challenging, but I actually like this set-up as it gives you a chance to show your depth and versatility, even as early as the first round. This is not the finals yet but from the difficulty of the repertoire, it may as well be.”

Gutierrez recently underwent exhaustive master classes at the Keshet Eilon music camp in Israel conducted by Patinka Kopec for the first half of the course, and Alexander Vinnitski for the second half.

The big bonus is the presence of Israeli violin icon Ivry Gitlis who listened to his rendition of Ernest Bloch’s “Nigun,” about the trials and tribulations of the Jewish people.

“I remember asking him if I was able to bring the Jewish pain and pathos,” Gutierrez recalled. “And he said, ‘The pain and the pathos are yours. These are what you bring to your music. Do not relate to your music based on how others will react or what others will say.’ In effect, he was telling me to always trust my inner voice. He also liked to advise students to ‘take risks’ and ‘not to play it safe.’ I also remember him saying that ‘music, like love, is not polite.’ I think he meant that one should dare speak the truth when one plays, without trying to seek approval or follow the rules all the time.”

What he learned from the close to three-week mastercourse went beyond acquiring better technique. “When you’re interacting closely for three weeks with the best and brightest, learning from the masters, and exchanging musical and creative ideas over meals, it’s like an overwhelming current of energy and motivation that’s sweeping you along and bringing out the best in you,” he said.

The sessions with Gitlis were highly memorable for him.

“Gitlis is a highly philosophical, extremely witty, charming and fantastic human being. He doesn’t just teach violin; he passes on his philosophy about life in general, and violin-playing in particular. For example, he says that you don’t play music; the music plays you. He espouses an attitude of being one with the music, of surrendering yourself and feeling free. This does not imply a total disregard of technique, though, because it is only by mastering and having full control of your technique that you can afford to set it aside and ‘forget’ about it.”

Gutierrez also figured in the Musica de Camara (Sonata Concert) at Keshet Eilon, where he played the Cesar Franck Sonata before the big audience at the insistence of his American mentor, Patinka Kopec.

Kopec is assistant to the celebrated Pinchas Zukerman at the Manhattan School of Music and with the great pedagogues Dorothy DeLay and Ivan Galamian, the same as his first German teacher, Jens Ellermann.

“As such, her methods were very familiar to me, and I was able to reconnect with and fortify many ideas that I had built up in my younger years. For the Franck Sonata, we discussed the concept of the ‘French sound’ and how to bring it out,” Gutierrez said.