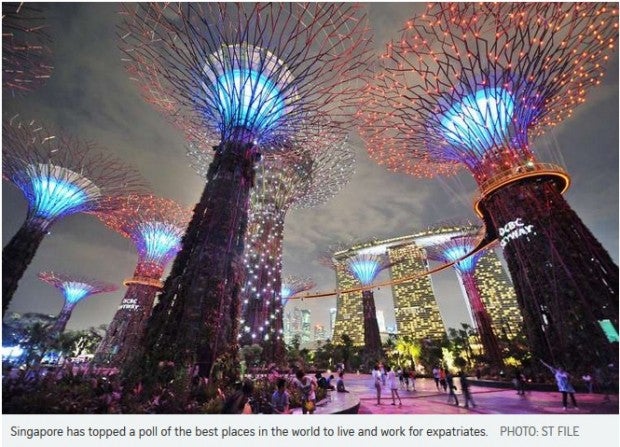 SINGAPORE—Singapore has topped a poll of the best places in the world to live and work for expatriates.

Singapore was chosen because it provided the right balance of career opportunities and lifestyle as well as a stable economy, according to HSBC’s latest Expat Explorer.

Confidence in Singapore’s economy is the highest compared to all other countries the survey showed. More than seven in ten expats in Singapore (79 percent) are confident about its economy compared to a global average of just 48 percent.

Expats also also found Singapore is appealing to entrepreneurs seeking to start up a business abroad, the suvery showed.

The HSBC Expat Explorer sought the views of 21,950 respondents from 39 countries asking respondents to rank countries based on career prospects, financial well-being, quality of life and ease of settling for partners and children.

Singapore is the top destination for expats based on its rankings amongst the three broad categories of economics, experience and family.

Matthew Colebrook, head of retail banking and wealth management, HSBC Singapore, said, “Singapore provides the perfect blend of career and lifestyle which makes it a preferred destination for expats, and this is clearly supported by the findings in the HSBC report.”

According to the Expat Explorer, more than half (59 percent) of expats believe Singapore is a good place for career advancements and 53 percent believe they are able to acquire new skills more so in Singapore than at home.

Singapore also offers a better quality of life overall than in their home country according to 67% of respondents and 65% acknowledge that their children’s health and wellbeing has improved since they have moved.

More than half of expats in Singapore say it is easy to set up finances (63 percent) and healthcare (63 percent). Three-quarters (75 percent) say their social life is either just as active or more so than at home and 57 percent also say they find it easy to adapt to the local culture and lifestyle.

According to the report, 87 percent of expats living in Singapore say it is a good place to start a new business, which is much higher than the global average of 56 percent. Singapore’s regulatory environment also allows entrepreneurs to start a small business in only a few days1.

Said Mr Colebrook: “Singapore has worked hard to position itself as attractive for business. It is pleasing to see that its economic and political stability and general pro-business approach is being recognized by entrepreneurs globally.”