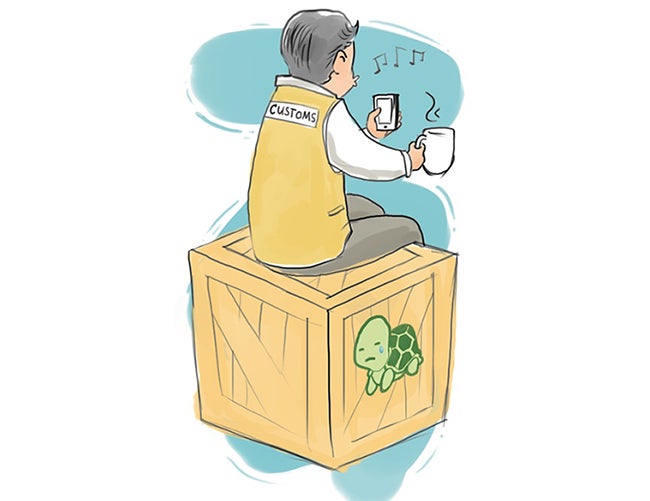 All over the Tee Turtle booth at the AsiaPOP Comicon were posters of varied cartoon characters illustrated with a distinct cuteness, but the tables and a sturdy deck were noticeably empty.

“We sell T-shirts, and prints and posters,” sales guy Dustin Counts tirelessly told the crowd gathering around the booth, many asking what they were selling.

Tee Turtle began only three years ago but gained fame for its shirts. But those shirts with “cute, nerdy, pop-culture-y goodness” were nowhere to be found, except for the green one the one-man team at the Pasay City comicon was wearing.

None made it out of the port, he explained.

All 11 boxes of Tee Turtle shirts—2,000 pieces carrying 40 different designs—didn’t get the green light for release to the cartoon-loving thousands at the comicon, not even until the end of the affair.

“Did we expect it? No,” said Counts in an interview with the Inquirer. Customs felt their shirts, pegged at $200 each and weighing a total of about 400 pounds, were both overpriced and overweight.

“They’ve gotten stuck in other countries, yes, but we were always able to get them out before the show started,” said Counts. He was in Singapore the previous weekend to also sell their shirts, and it went well, he said.

Counts was told to change his shipment details from formal to informal entry before they could be released, he explained. “I did that and the shipments were up for physical exam on Friday. They’re probably not open on Saturday and Sunday, and then I never heard about anything else.”

Making the best of it

Even Tokidoki had the same problem, he revealed. The staff at the brand’s booth said their products arrived only Saturday afternoon.

“It sucks, but we’re making the best of it,” he noted.

Because the show must still go on, Counts devised an ordering scheme. He would show customers a portfolio of their over 100 designs (they have two to three new designs every week, he said) and they could place their orders through him or through their website.

In our currency, the shirts are worth P1,200 inclusive of shipment fee. If a person orders more than one shirt, the other shirts will be worth only P1,000 each. Orders will be with the customer in one-and-a-half to two weeks.

“It’s going pretty good,” Counts said. But it would have been way better to see the designs in person—for, seriously, who can make Pikachu even cuter than he is, and place him beside an equally cute Sailor Moon or maybe Little Mermaid on one shirt?

Just before the end of our interview, Counts said he would be going to Boracay and/or Palawan this week for a vacation. We’re hoping he is enjoying one of those island paradises now, especially after that Customs predicament.