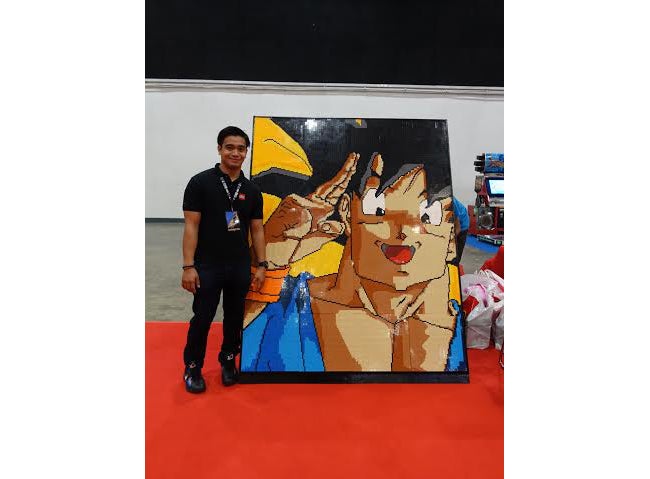 The Lego exhibit at the AsiaPOP Comicon would simply have been out of place without the Son Goku mosaic amid statues shipped from Denmark, and that is all thanks to Cris Atienza.

The work is composed of 15,000 bricks put together in two working days, said the 27-year-old Lego senior builder, who made it happen single-handedly. “With an upcoming movie this year, he was our animé appeal.”

As a senior builder, he is part of a pool that conceptualizes and executes attractions during Lego appearances, which could reach up to four a month. The team has created monumental works, such as the 480-square-foot, 70,000-brick Philippine map.

During exhibits, they also double as setup guys and sales persons, which was the main reason he was nearby for the interview on the last day of the comicon.

It’s a lot of fun to openly suggest what would make their exhibits pop out, Atienza explained. The only challenges are when they don’t have enough pieces to work with, either in numbers or colors, and if they are pressed for time—unless they enjoy the building process.

He loves his job

That is what happened to Atienza. While the Lego Philippines office in Libis, Quezon City, gave him the Son Goku task only on Sept. 10, it was not very hard to finish because he loves his job, he said.

“I enjoy my job at Lego, so I do not really see it as work. It does not feel very hard,” he explained. “I have been with Lego for around eight years now, and it just grew on me since I joined in 2007. I wasn’t into Lego, even though I saw it before. I just couldn’t afford it back then, and with this job, I am able to work wonders.”

He was supposed to finish a degree in hotel and restaurant management, but his father’s death forced him to be the breadwinner of the family, he recounted. In 2007, when Lego opened in the country, he was hired as a sales guy, and when it opened builder positions in 2010, he was again looking for a job.

Although he has plans to go back to school, he sees his job at Lego as “destiny,” with both job openings coming when he was looking.

Attesting to his mastery of the craft, he just let kids play with his work. He said, “Kaya naman naming ayusin.”