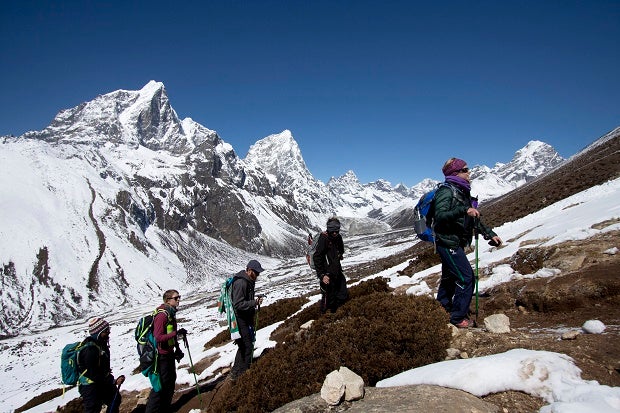 In this March 18, 2015 file photo, trekkers take an acclimatization hike to Nagarzhang peak above Dingboche valley on the way to Everest base camp, Nepal. Mohan Sapkota, a spokesman for the Himalayan country's ministry of tourism said Tuesday, Sept. 29, 2015, that Nepal is considering placing age and fitness limits for people who want to climb Mount Everest. Last week Japanese climber Nobukazu Kuriki, who had lost nine fingers to frostbite, abandoned his fifth unsuccessful attempt to scale Everest. Everest climbing permits earn the impoverished nation millions of dollars but the government has come under criticism after a series of disasters over the last few years. AP FILE PHOTO

KATHMANDU, Nepal — Nepal is considering placing new age and fitness restrictions on people who want to climb Mount Everest, officials said Tuesday, as the country looks to enhance safety on the mountain after several disasters in recent years.

The government is mulling barring people under 18 and over 75, as well as those with disabilities, said Mohan Sapkota, a spokesman for the Himalayan country’s ministry of tourism. The new rules could also require that climbers attempting to scale the 8,850-meter (29,035-foot) mountain have experience on medium-size peaks.

“We are discussing the ways to promote safety for mountaineers. The mountain should not be the place for people to die. It should be a place for adventure,” Sapkota said, adding that the government’s deliberations were at a very preliminary stage.

Everest climbing permits earn Nepal, an impoverished nation, millions of dollars a year, but the government has come under criticism after a series of disasters over the past few years. Officials have also been blamed for granting too many permits.

Hundreds of climbers — ranging from some of the world’s most experienced mountaineers to relative novices on high-priced, well-guided trips — make summit attempts on Everest every year. Novice climbers are guided by experienced Sherpas, but their inexperience puts both the climber and the Sherpa at higher risk.

Nepal currently bars people under 16 from attempting to climb Everest, but has no upper age limit. The oldest person to scale the peak was an 80-year-old Japanese climber.

The youngest to reach the top of the world’s highest mountain was 13-year-old American Jordan Romero, who did it in 2010. But Romero climbed from the Tibet side of the mountain at a time when China imposed no age restrictions on climbers. Since then, China has imposed an upper limit of 60 and a minimum age requirement of 18 for climbers.

Last week, Japanese climber Nobukazu Kuriki — who lost nine fingers to frostbite during a 2012 attempt to climb Everest — abandoned his fifth unsuccessful attempt to scale the mountain. Kuriki was the person first person to attempt the peak since devastating earthquakes rocked Nepal in April.

The president of the Nepal Mountaineering Association, Ang Tshering Sherpa, said he would welcome age restrictions, but added that the government had not yet formally discussed any proposals with his organization.