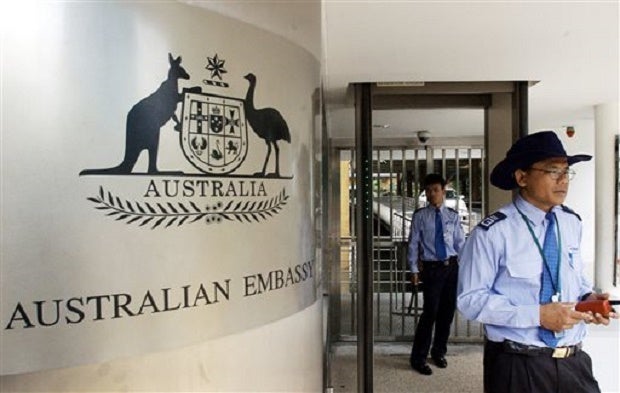 FILE - In this Sept. 10, 2004 file photo, two Thai security personals stand guarding at the gate to the Australian Embassy in Bangkok, Thailand. Australia's Foreign Minister Julie Bishop announced new measures Wednesday, Dec. 3, 2014, to underscore consular services as a last resort and to promote "a stronger culture of self-reliance and personal responsibility in the traveling public." At the embassy in Bangkok  Australia's busiest  an Australian walked in with a prostitute and was refused a loan to pay for services already provided, said Anita Downey, a senior counselor official at the Department of Foreign Affairs and Trade. Such requests are common at that embassy, she said. (AP Photo/Apichart Weerawong, File)

Campaign on Australian meat kicks off in Makati

Filipinos will be treated to authentic Australian meat, wine and cheese as the Australian Embassy in Manila with the New World Makati Hotel last Thursday night kicked its three-week promotional campaign “Savour Australia.”

“We hope to showcase the Australian food and beverage products, particularly on the side of Victoria, which has the best restaurants in Australia,” Anthony Weymouth, Senior Trade Commissioner for the Philippines, said in an interview with reporters. Victoria is a state in the south-east of Australia.
Chefs at New World Makati Hotel partnered with the Australian Trade Commission and the state government of Victoria, Australia, to share their expertise on the high-quality meat, mine and cheese of Australia through a hotel-wide promotion from October 19 to November 8.

During the launch, New World Makati Hotel executive chef Robert Davis and guest chef Tim Hollands  showed their curated wine and cheese pairing, followed by a presentation of the special menu items exclusively available during the three-week promotion. The two developed special menus with Australian produce for the hotel’s Jasmine restaurant, Cafe 1228, and the Lounge.

In those weeks, Savour Australia will give goers of the hotel’s Cafe 1228 the taste of the well-marbled premium grass-fed O’Connor Premium beef prepared into an array of carving selections on the buffet spread.

The Cafe serves an array of international cuisines, traditional sides, desserts, as well as hot and cold beverage for Php1,999 per person for lunch and P2,299 per person for brunch on weekends and dinner party.

Weymouth noted that Australia is the Philippines’ top exporter of red meat.

Reports from the Philippines’ Bureau of Animal Industry said that Australia has taken almost 50 percent of the Philippine market for red meat. It is followed by its chief competitors New Zealand, United States and Brazil.

“Around 90 percent of the cattles in Australia are grass-fed. They are grazing on fresh green pasture, which makes the meat natural and healthy,” Weymouth said. Niña P. Calleja/RAM