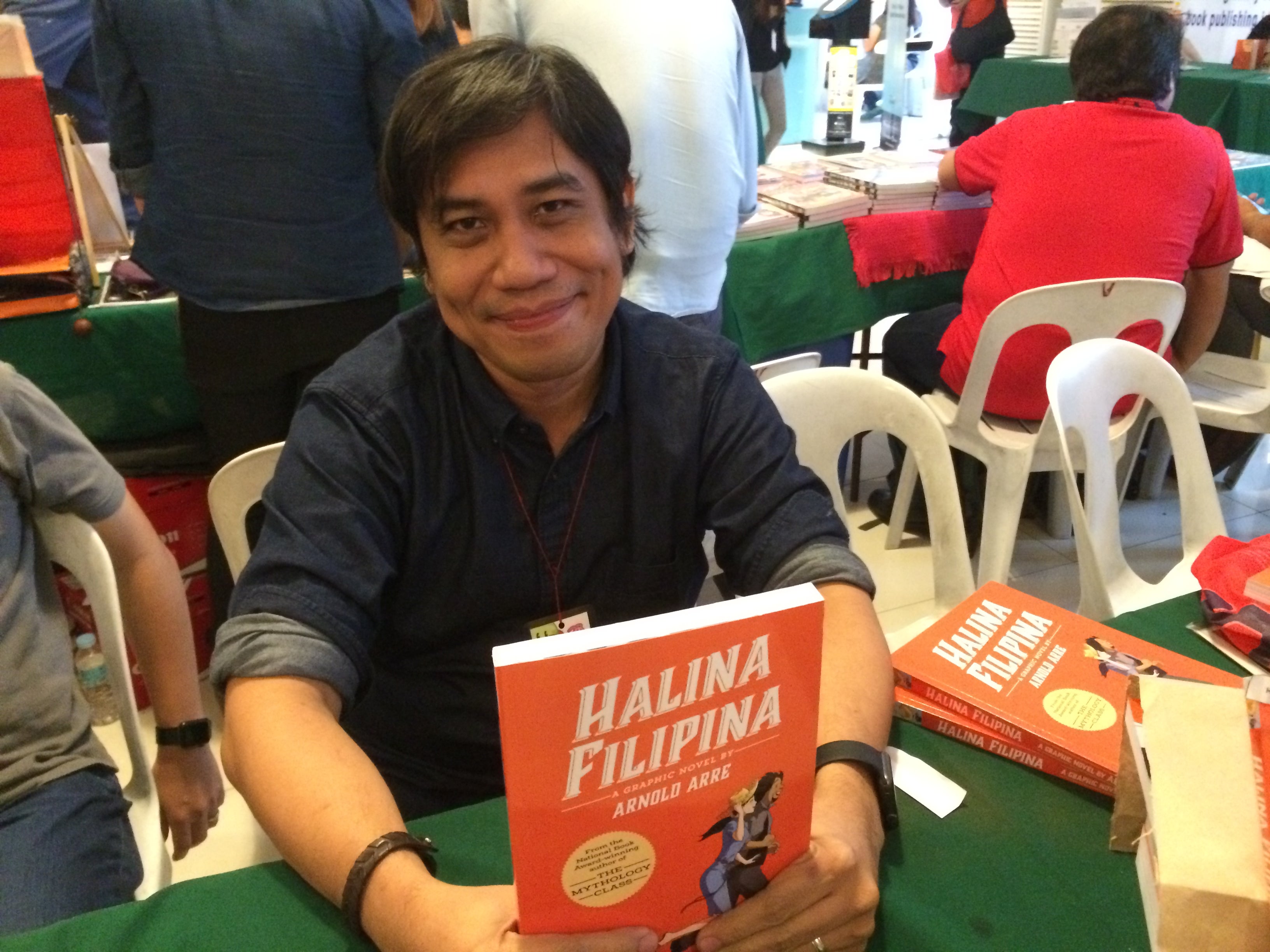 IT has taken seven years, but award-winning Filipino comic book creator Arnold Arre finally has another graphic novel that he wrote and illustrated. Arre launched “Halina Filipina,” published by Nautilus Comics, earlier today at the Komiket: The 1st Filipino Komiks, Books and Art Market at Elements Centris in Quezon City. “Halina” is the first graphic novel Arre has both written and drawn since 2008’s “Martial Law Babies.”

Arre enjoyed working on the new book. “It feels great,” he said as he paused from signing for fans. “I feel like I wasn’t doing anything before and now I’m doing stuff that I like.”

Arre first won the National Book Award for Comic Books in 1999 for “The Mythology Class,” a tale of young Filipinos encountering mythical creatures in an otherworldly place. He also won the award in 2000 for “Trip to Tagaytay,” set in a future Philippines.

“Actually, ‘Halina’ is 13 years old,” Arre explained. It turned out that “Halina” was originally intended to be the novel that followed 2002’s ‘After Eden.’” “But I didn’t want to follow ‘After Eden’ with another relationship story,” he said, and Arre wound up doing the supernatural action story “Ang Mundo ni Andong Agimat” in 2006 instead.

Recently, Arre’s wife, the artist Cynthia Bauzon-Arre found his old drawings for “Halina.” “You have to release this,” Cynthia told her husband. So Arre did. “I just lost interest in the story before, but now I’m back into it,” he said.

The titular character Halina is a Filipino-American who travels to the Philippines for the very first time to rediscover her Filipino roots and meet her relatives. Along the way, she meets jaded film critic Cris. The two hit it off, with Halina getting a crash course in everyday Filipino life and Cris seeing the culture around him in an entirely new way.

Arre said he wants readers to know “the feeling of being proud of the Philippines. At least you have an identity. At least you don’t have to get someone else’s identity. This is your identity, and you have it the same way Halina has in looking for her Filipino roots.”

Happy to out this book out, Arre said he was now looking forward to what comes next. “I’m going back to Philippine mythology,” he admitted. “I’m doing another Filipino mythology completely different from ‘Mythology Class.’” Arre hopes to release the new novel in a year.

Speaking of “Mythology Class,” the property is a hot topic after Jerrold Tarog, the director of the hugely popular “Heneral Luna,” announced that he was now developing “Mythology Class” as a feature film. Arre remains tightlipped about the situation, tersely saying “Mythology Class” is “under development,” that the two sides are talking. He ended the statement with an enigmatic smile.

In the meantime, he said he hopes fans give “Halina Filipina” a look. “It’s like meeting old friends,” Arnold Arre said. “It’s been completely re-written and re-drawn because my style is different from 2002. It’s fun. It was like going back to the past. I didn’t know I used to write things like this. But things have changed. I’m wiser now, more experienced. It’s like going back to the past and changing stuff. The idea is there from 13 years, but the drawing and the writing provides a completely fresh reading experience”