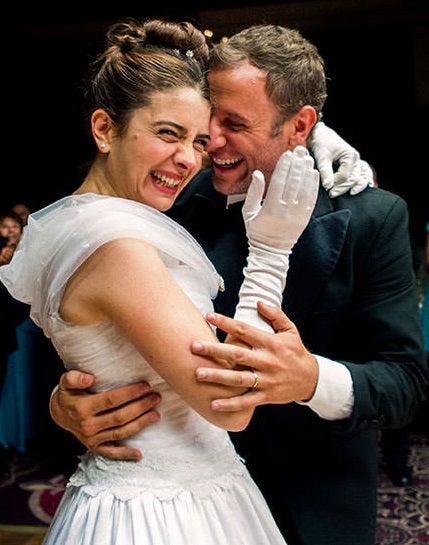 A CAPTIVATING Érica Rivas as a different sort of “bridezilla” in “Wild Tales.” SONYCLASSICS.COM

The film delivers equal measures of caution and gratification through dramatic yet darkly comedic storytelling. Varying degrees of obnoxious behavior is exemplified by the explosive performances, most notably by Érica Rivas as a bride who goes mental on her wedding day after discovering her groom has been cheating on her; and Ricardo Darín as an engineer and family man driven to terrorist acts by an abusive bureaucratic system.

The festival’s inaugural screening on Oct. 7 features “Felices 140,” which stars Maribel Verdú, who will be flying over to Manila to grace the event.

On Oct. 9, the audience will have a chance to meet the actress in an open forum that follows the screenings of her two films.

Spanish journalist-filmmaker Ramón Vilaró will present on Oct. 12 “De Aliados a Masacrados,” his 2014 documentary about the slaughter of the remaining Spaniards when the Japanese occupied the Philippines in World War II.

Czech director Lenka Kny will conduct an open forum the next day, following the screening of her 2013 comedy “Milagro en Praga.” The film, a joint production by the Czech Republic and Mexico, focuses on family and religious values and traditions.

Over 20 films make up the 2015 festival lineup, with a second leg to be held Oct. 19-25 at the National Commission for Culture and the Arts (NCCA) in Intramuros, Manila. Select films will be screened in Baguio, Iloilo, Zamboanga and Davao, the tour made possible through the help of the Film Development Council of the Philippines (FDCP).