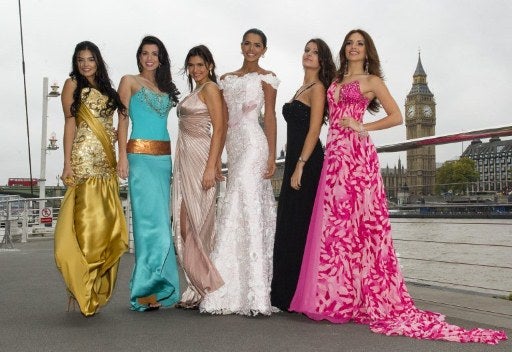 LONDON — The glitz and glamour of Miss World returns to its British home to celebrate the global beauty contest’s 60th birthday on Sunday, with a billion viewers expected across the planet.

A record 122 beauty queens from Albania to Zimbabwe take part in the pageant, which will be broadcast live to more than 150 countries.

The contestants have spent the past two weeks on a whirlwind tour of Britain, whipping up excitement ahead of the final, which takes place from 1700 GMT till 1900 GMT Sunday at the sold-out Earls Court Two venue in west London.

While beauty has always been at the heart of the event, brains, skills and good causes play a major role.

“Every beautiful woman must have a purpose. Make your time worthwhile,” Miss World chairwoman Julia Morley told the contestants as they kicked off their British tour.

The contenders were given a trip round Scotland to see the Gleneagles golf course, Stirling Castle and Edinburgh Castle. They also tried out traditional Highland games, including caber tossing.

Next stop was the prestigious University of Cambridge, where they took part in a debate on social responsibility and had a punt race on the River Cam.

In London they went on a River Thames boat cruise to Greenwich, took a sightseeing open-top bus tour, went round the Tower of London and took a trip on the London Eye observation wheel.

The finalists have already been through five competitions which will help determine the overall winner: beach beauty, top model, talent, sports, and beauty with a purpose, where they can highlight a charity project.

The final will see footage screened from the previous two weeks, contestants performing national dances, footage from the talent show final and a parade before the winner is revealed.

Organizers are playing up the 60th anniversary homecoming, with past winners returning to take part.