No need to fly for The Halal Guys | Inquirer Lifestyle ❮ ❯ No need to fly for The Halal Guys

The wait is almost over.

The Halal Guys will officially open on October 13, fulfilling the craving of the iconic New York food cart’s passionate Filipino fans. The store, which you can find at the fifth floor of SM Megamall’s Mega Fashion Hall, is The Halal Guys’ first outside of the United States.

“This all happened by accident,” said Jaime Daez, the man behind Fully Booked and now The Halal Guys Philippines.

Super got a sneak peek last Wednesday and, over delicious platters of gyro and chicken, Jaime told us the story of how he brought the brand to the country.

“The reason we have The Halal Guys here is because of my love for basketball and my love for the San Antonio Spurs,” Jaime said.

Jaime and his wife Chris had flown to the US to watch the NBA Finals in 2013. “The Spurs were playing against the Miami Heat and we watched games 4 to 7 live. Game 6 was very historic, with Ray Allen’s three-pointer robbing them of their victory. It was probably the most painful loss ever and we saw it live. That was a bit traumatic for me.”

The following year, when the Spurs made it to the finals again, Jaime told Chris he wanted to go again. “It was their chance for redemption. But I didn’t want to get heartbroken again so I told my wife we would only go if it was almost sure that they were going to win.”

Jaime watched game 4 on a Friday morning in Manila, telling Chris they would fly out if the Spurs won. “By the time it was the fourth quarter, they were winning by 20. I started booking the flights, the hotel, the game tickets. We flew out that same night.”

Wanting to make sure they’d be there for all the games, Jaime booked a return flight for the day after game 7 was scheduled. But the Spurs won the championship on game 5 so they had time left. “I told Chris I wanted to go to New York to check out the franchise fair, you know, just for pure curiosity. I had never attended that show.”

The International Franchise Expo started on Thursday and Jaime and Chris went the following day. “The big chains were there, a lot of yogurt places. We were passing through but nothing seemed to be of interest.”

They spotted The Halal Guys in the very last aisle. “I didn’t expect them to be there. When I saw them, the first thing I said was, ‘Oh no.’ Oh no because I thought we were too late. It was the second day and there was probably some guy from the Philippines who had already talked to them and we might be too late.”

Jaime and Chris had been big fans of The Halal Guys for years, making it a regular stop during their trips to New York. “The first time I went was with Chris. Ever since that time, I would frequent it. I often travel alone, you never want to eat in a fancy place alone so I would go there, take out, bring it to my hotel and eat it. It’s value for money, you can’t find anything better,” Jaime said.

Jaime’s usual order is the gyro-and-chicken combo platter served with basmati rice, vegetables and pita bread. Chris loves The Halal Guys food so much that she even tried to recreate the chicken platter three years ago, posting a photo of her #homemadehalal on Instagram.

“I saw The Halal Guys at the fair and I just knew. I just felt that it was gonna click in Manila. There’s no question. It’s a no-brainer,” said Jaime.

The fair was where The Halal Guys expressed their desire to expand globally and FransMart, a franchise development company, was helping them. What had begun as a hot dog cart run by Egyptian immigrants in the early ’90s and had become a New York institution was ready to conquer the world and Jaime was there at right time.

“It was very serendipitous,” Chris said.

“I talked to the VP of FransMart and they said if you’re interested you need this much. At that point I didn’t care, I didn’t care how much capital was needed. I was like yeah, no problem,” said Jaime.

Sensing Jaime’s eagerness, even though the fair was already closing for the day, the owners of The Halal Guys came in to meet with them. “We sat down and talked for 30 minutes. I guess they could sense that we were really interested. We were very respectful. They’re Muslims and they want to make sure that we serve their food in a Muslim way and we said, ‘We will totally respect how you do everything.'”

They signed the contract less than a month after that first meeting, becoming the first in the world to franchise The Halal Guys.

(READ: Everything you need to know about The Halal Guys in Manila)

In preparation for the opening in the Philippines, Jaime wanted to make sure everything was done the right way. “Even though I’m not a Muslim, I respect all religions. I had to take a halal seminar and I found out that there are 18 million Muslims in the Philippines. That’s practically 20 percent of the population, it’s huge.”

A big step in bringing The Halal Guys in was getting a halal certification. “We wanted to make sure that we are halal certified, we wanted to make sure that to any Muslim, it’s safe to eat our food. And to get that halal certification is extremely difficult. There are many accrediting bodies in the Philippines but only two are recognized internationally. Halal Development Institute of the Philippines is the only one recognized in the US so we felt that since The Halal Guys is a US brand, we had to get our certification from HDIP.”

It took them six months to get the certification. “We only got it last month. That’s why we had to delay our opening.”

But for fans of The Halal Guys, many of whom still couldn’t believe that it’s finally in Manila, their favorite halal platter is worth the wait.

The Halal Guys Philippines is importing the gyro and the legendary white and red sauces. “The gyro is exactly the same one you eat in New York.”

The biggest difference is the rice. “In New York they use basmati, here we will use jasmine. The flavor is exactly the same, the seasoning, the spice, the color exactly the same. There are two reasons we made this change: one is you cannot get a steady supply of basmati rice here and if you can, it’s probably gonna cost three to four times as much as jasmine. Secondly, everyone here is used to jasmine rice. One of the people who went with us for training had the basmati rice here and the jasmine rice here, he loved the jasmine rice much more.”

We ate our chicken and gyro with jasmine rice and realized that despite the change, our platters still tasted like The Halal Guys platters we know and love. It didn’t change the experience at all.

“We cannot match the pricing of the food cart because the food cart doesn’t have to pay rent. They don’t charge sales tax either.”

Wanting to offer good prices and at the same time satisfy expectations, the team behind The Halal Guys Philippines has created a menu that has something for everyone, no matter the appetite and budget. 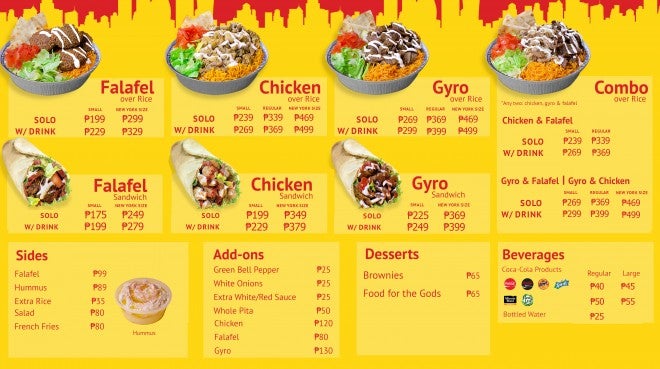 “We have the most varied menu in terms of pricing. The cheapest meal in our menu is the falafel sandwich. It’s P175. If you want the value meal with a drink, it’s P199.” Gyro and chicken sandwiches are available too.

The small seven-inch falafel platter costs P199 while the regular eight-inch one costs P299. The small chicken platter is P239, while you can get a regular one for P339. Pay P269 for a small gyro platter and P369 for a regular one.

“The regular is big. The regular, honestly, most women won’t be able to finish it,” said Jaime.

But The Halal Guys even has bigger offerings. “Our objective was friendly pricing but we also wanted to make sure that when people who have tried it in New York come in, they won’t feel cheated and think, ‘Oh, the portion is smaller.’ So we added the New York-sized platters.”

You can add P30 to get a 16-ounce drink with any of the menu items.

“If you compare our pricing to Chicago and SoCal, we’re actually cheaper. The most expensive meal is P499, which you can share,” said Jaime.

Jaime suggests first-timers try the gyro-and-chicken combo platters. “I dare you to finish the New York-sized one. I can finish it but I’m a big guy.”

The first people to line up when The Halal Guys opens on Tuesday will get to try to do that for free—they are giving away New York-sized gyro-and-chicken platters to the first 100 people who show up. And the Halal Guys Philippines has a lot more surprises planned.

They will be opening more branches, with the next one set to open in Fully Booked Fort before Christmas. “It’s going to be a counter, just for takeout. But the beauty of it is the park is right in front and there are benches there. I love it because you kind of replicate the New York experience.”

And because they own the building, they can stay open late, offering an answer to your late-night halal cravings.

“We will concentrate on Manila for the next 12 months, but we are definitely targeting the provincial market too.”

The Halal Guys’ three founders will be in Manila for the opening on Tuesday. “I feel honored and privileged that they are coming here,” said Jaime.