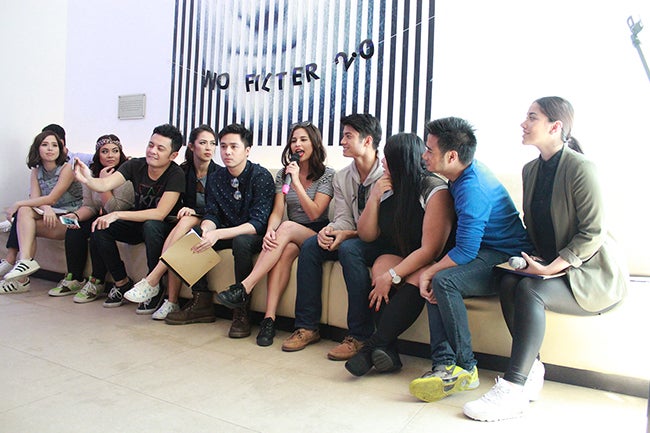 What makes a millennial?

Generation Y. Echo Boomers. Generation We. Generation Me. These are just some alternative names for millennials. This demographic born some time between the 1980s and early 2000s is sometimes perceived as a privileged, pampered and wildly ambitious bunch of young people with a sense of entitlement, but you have to hand it to them.

The millennial lifestyle isn’t just about taking selfies, posting hashtags or having millions of followers on social media; it also revolves around following their dreams—on their own terms—and actually succeeding.

And it’s not all about them. Just take a look at how Mark Zuckerberg has made an impact on practically everybody’s lives—from the Baby Boomer CEO to the Generation X journalist—through Facebook. Or Lena Dunham’s success with the show “Girls,” and education activist Malala Yousafzai’s mission.

Millennials come in all shapes and forms: the famous blogger, the self-promoted artist, the social entrepreneur and the struggling writer, among others. They have stories to tell, too.

But that’s not even half of the story.

The Sandbox Collective’s “NO FILTER: Let’s Talk About Me” became the perfect venue for millennials to tell their stories. The idea of supposedly self-absorbed kids engaged in monologue may seem annoying to some, but is apparently a source of wonder, and a revelation, to many. Banking on the sold-out success of its first run, The Sandbox Collective’s “NO FILTER” returns to the stage this coming October. 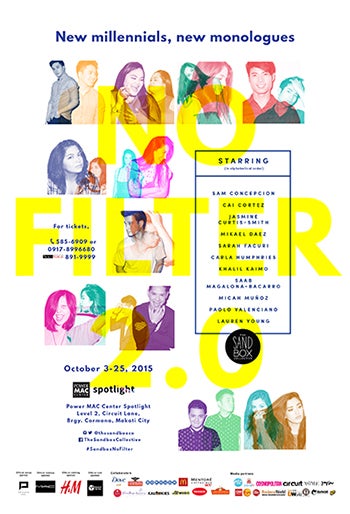 The material for “NO FILTER” was written by millennials themselves. The script, if anything, is a collection of confessionals that unapologetically but sincerely divulges the challenges, struggles and victories of being a millennial in this day and age. If the brief but revealing script previews during the press conference are any indication, the monologues and dialogues should be entertaining, hilarious, emotional, and even poignant, in different instances.

Adding polish and flavor to the artistic mix, aside from critically acclaimed director Toff de Venecia at the helm and writer Jam Pascual is dramaturg Wanggo Gallaga, who, like the other collaborators of this project, is one of de Venecia’s friends.

“I suppose it’s very millennial, isn’t it? Working with our friends,” says de Venecia. “The writers we reached out to were those who Wanggo, myself, and our other head writer Jam Pascual were connected to, and respect deeply. We assigned them topics to write about and the show just sort of organically rose from the ground up.”

The process of mounting the play, which took about a month and a half from the development of the script and casting to promotion and performance, was a concurrence of different voices unified by one intention. “Even in terms of actors we cast, whether it be TV, film and media personalities who were first-time theater actors, or returning theater actors, these were friends and/or acquaintances we had deep respect for and wanted to collaborate with. The process has been very democratic, ignited by our passion to reach out,” de Venecia shares.

And so the question arises: why would one want to spend time and money to watch a play about millennials? What’s in a millennial, anyway?

De Venecia provides a different perspective on the generation he belongs to: “That they’re so introspective. That because the generations before us were able to provide the foundations for living, we are now of the proclivity to begin questioning things more. How can you start asking why you need a roof, or why you need a roof that’s yours, when the problem is how to have that roof in the first place so you don’t rot outside?

Considering that he’s done Broadway and Off-Broadway musicals for a decade, de Venecia is particularly proud of this project, and with good reason. “It’s an original. This is the type of thing that spurts out of the confidence you gain as you say yes to things outside your comfort zone. A friend asked me to direct his production of ‘The Glass Menagerie’ last year. Another friend asked me to direct his original musical in February for the Fringe. I feel as though both experience gave myself and Sandbox the confidence to dive into this head on. I mean, that’s pretty crazy, right? Everyone saying yes to an idea that organically formed in such a short period of time.”

Yes, “NO FILTER” is a play about millennials. Millennials should watch it, because, as de Venecia points out, it’s “their lives depicted on stage.” But while it was created with millennials in mind, the play has successfully catered to and satiated a larger audience.

“There’s something universal about following your passion, about falling in love, about questioning our faith. Maybe the previous generations just weren’t as vocal as we were, or they didn’t have access to personally written think pieces or blogs that allow you to reflect on these things. We have the internet that allows us to connect with other people who might be feeling the exact same thing. There’s a line in the play that says, at the end of the day, it’s not about whether it’s the same ship or a different one. All the crew is thinking at the end of the day is, “Don’t sink! Don’t sink!”

As Wanggo Gallaga puts it, “When we came into this we had no intentions of trying to make them look better. We didn’t come in trying to demonize them or glorify them. We wanted to show them as they are. As what Toff would always say, ’warts and all’…So yes, they can sound elitist, self-entitled and narcissistic but they can also be very inspiring.”