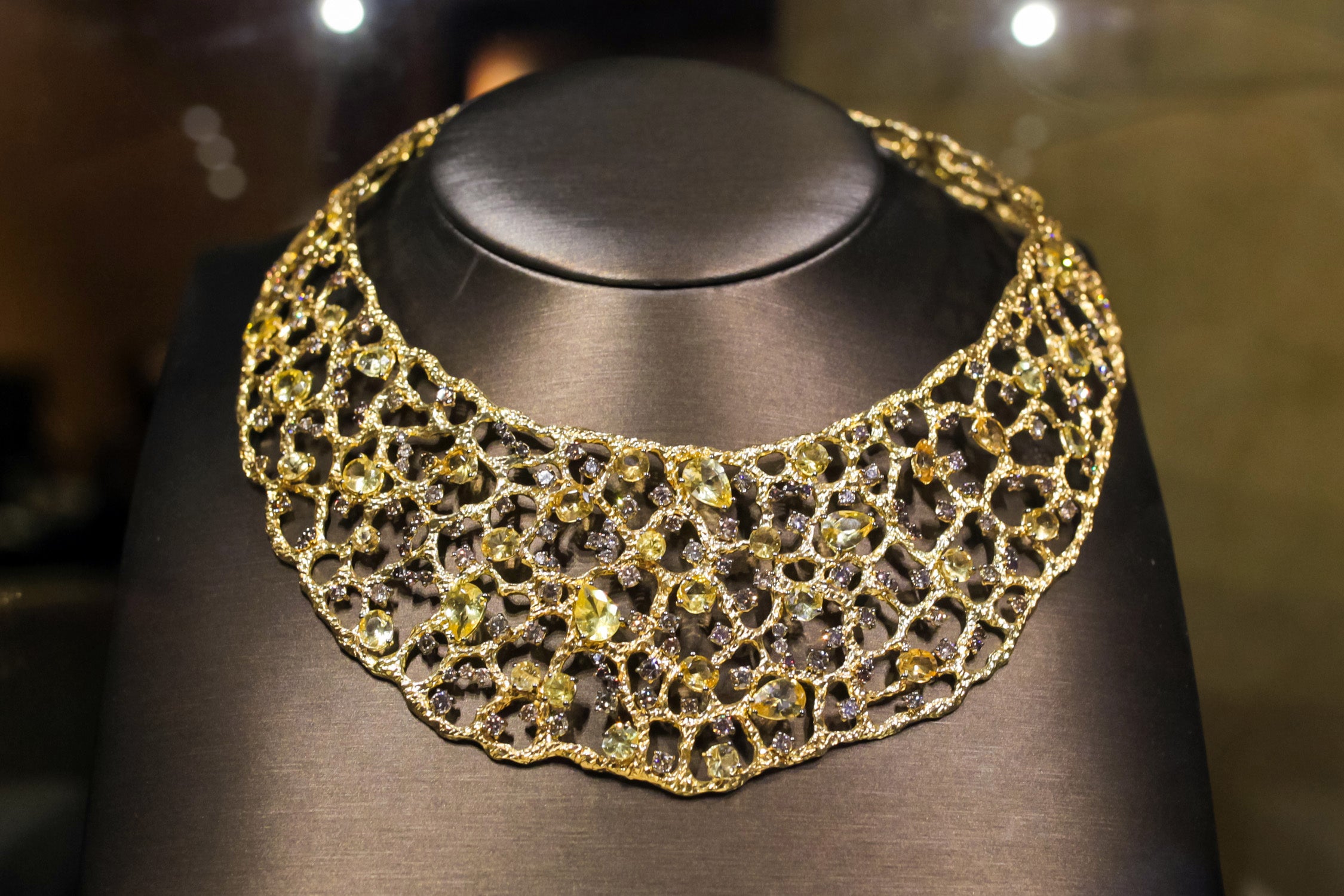 The very dramatic necklace from the Tanaquilla collection has brown diamonds and danburites which Roberto Coin describes as "very rare stones." (photos by Leo Sabangan II)

For 20 years now, jewelry creator Roberto Coin has received between 5,000 and 6,000 letters from clients who believe the small, hidden ruby tucked inside every piece he makes is imbued with positive, healing powers.

More than that, the wearer also feels special, unique and beloved.

“I love this concept so I adopted it and put the rubies inside my jewelry. Men prefer to give rubies to their wives. And even if some people don’t believe the story, they are still happy to get this kind of present,” he adds.

Letters usually begin with the line saying, “Roberto, your ruby has worked.”

“For example, one mother says, ‘My son doesn’t use drugs anymore.’ Or another says, ‘My aunt is back from the hospital and is now in good health.’ They say these  things happen because ‘I am wearing your bracelet.’ They think it is my ruby that brought good luck,” Coin tells Inquirer Lifestyle in an exclusive interview.

Coin’s love affair with jewelry began in 1977 when he founded his company in Vicenza, aka the City of Gold, in Italy.

While it initially made glorious pieces for other international brands, Coin eventually launched his eponymous brand in 1996. Those hidden rubies set in 18-karat gold bracelets, rings and pendants helped his empire expand to 800 shops worldwide.

Famous women like Madonna, Gwyneth Paltrow, Salma Hayek and Ashley Judd have been seen wearing Coin’s pieces. He does not consider them his muses, however. Not even his lovely supermodel endorser Christy Turlington.

“My job is to make beautiful jewelry. Show me the woman and I will make a spectacular piece of jewelry for her,” he exclaims.

Besides, Coin is the first to admit that each piece he creates would not suit every woman who falls in love with it.

“You need to consider the color of your hair, your eyes, whether you have long or short fingers, whether you like to show off your ears, even how you would dress.  There are many, many things to take into consideration,” he explains.

Coin’s creative process begins with designs he plays around with in his mind.

“First, you imagine. Then you create,” he says. It helps to peg themes to seasonal color forecasts.

“I go with what is in fashion.  Every year there is a particular stone. Last year it was very much green stones, turquoise, the color of the sea.  I allow myself to be influenced by color,” Coin shares.

While he obliges a season’s favorite color, Coin goes one step further by executing designs so outstanding like the Animalier and Garden collections (available by special order from Rustan’s Makati), that other jewelers sometimes could not help but make blatant copies of his works.

“I create trends… Everybody is trying to copy me,” he adds only  half-jokingly.

Coin was recently in Manila to witness Rustan’s introduce three of his collections, including the elegant and high-end Cento, the romantic Tanaquilla and the entry-level Black Jade line.

Coin proudly notes that the diamonds used in Cento “have a hundred facets instead of the usual 57 to 58.  They are the most spectacular diamonds ever cut in history because they reflect light far better than other diamonds. Extremely difficult to do, only four to five percent of professional cutters can do that.”

Also, Cento uses diamonds of higher quality because inferior stones would not be able to withstand the cutting process. The result: scintillating gems that come with a certification and no inclusions (those very faint cracks visible only  under a powerful lens).

The Cento pieces available at Rustan’s are set in white gold and accompanied by huge, deep blue tanzanites.

The Tanaquilla collection, on the other hand, comes with a story. Coin says that during the 8th century B.C., there lived an Etruscan woman named Tanaquilla who was the wife of the Roman emperor Lucio Tarquinio Prisco.

Tanaquilla’s strong character allowed her to forge the destinies of her husband and the City of Rome, and she is still regarded by modern feminists as an icon of emancipation and freedom.

Coin fashioned his Tanaquilla pieces from ancient jewelry designed during her time.

“We did not copy, we interpreted the jewelry in a modern way.  Their jewelry then was 24 karats and soft.  Ours is harder, but if you check the carving there are brown diamonds and danburites which are very rare stones,” Coin points out.

His Black Jade collection is made with 18-karat gold and imbued with black jade, mother-of-pearl and a very saturated green agate that could be mistaken for the far more expensive emerald.

Coin then shows off a thick white gold square-shaped bangle paved with diamonds from his classic Pois Mois collection, also available at Rustan’s. The bangle’s bottom is studded with equally spaced dots that create a harmonious design to complement the diamonds.

“The diamonds are set like a baby’s bottom. Very smooth. It’s called Pois Mois. Pois is the dots, mois is me,” he coos while cradling the jewelry.