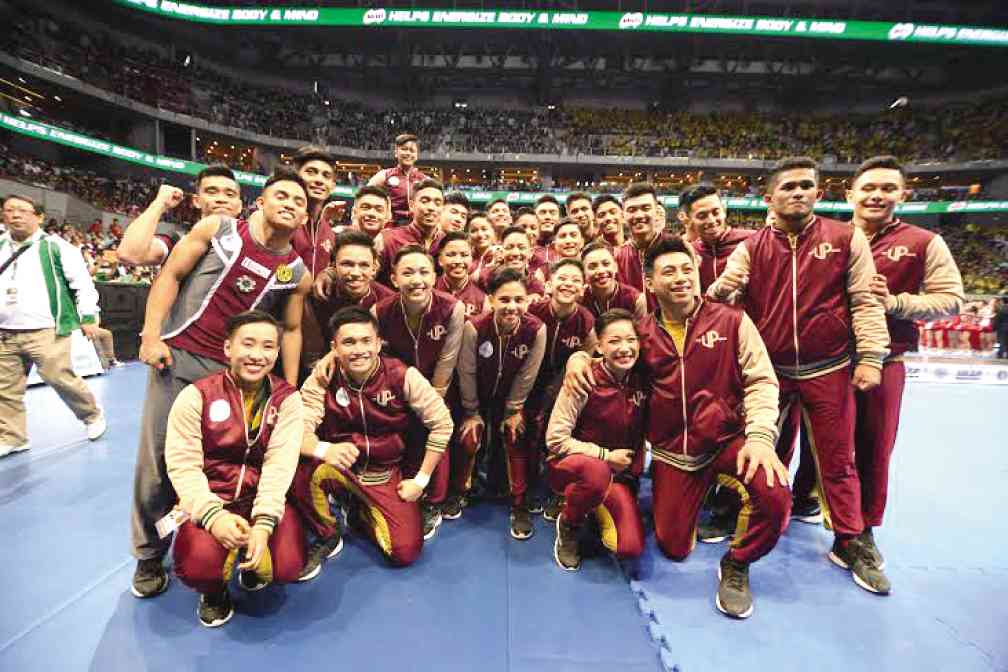 UP PEP Squad was a crowd favorite leading up to the announcement.

Breaking down the UAAP Cheerdance Competition

Who missed the look of disbelief among the members of the UP Pep Squad after the announcement that it placed third in the 2015 UAAP Cheerdance Competition (CDC)? For sure, the people in Twitter-verse did not.

Many hearts broke because the #UtakPuso theme was truly heartrending—coupled with a buwis-buhay version of that famous Dirty Dancing stunt that suddenly transitioned into the final tableau of a heart.

Not a few ranted on social media because they thought the National University Pep Squad didn’t deserve to be champion. Meanwhile, the UST Salinggawi Dance Troupe climbed from a second runner-up finish last year, but some believe it deserves the top spot.

Apparently, some even thought, “Anyone but NU.”

Those who disagreed with the results raised interesting points: “Let’s look at the judging, the judges” or “Did NU win because of a ‘home-court advantage?’”

Are any of these true? Or are they imaginary connections? Like #Puso problems, it’s complicated.

Former UP Pep Squad member Jess Pe Benito agreed with the Top 3 picks—but with UP as champion, followed by NU and UST.

“It’s based on difficulty, execution, technique,” said the 25-year-old, who was among the cheerleaders crying tears of joy when UP won in 2010 and 2011 for its fiesta and Madonna themes, respectively.

UP was also the first choice of Ayen Escalante, 24, a former cheerleader at the much bigger National Cheerleading Championship (NCC): “UST Salinggawi Dance Troupe and FEU Cheering Squad can place either second or third, although UST played it safe.”

NU was fourth on her list, because, to her, the team’s edge with difficulty and tumbling passes was trumped by its errors, among others.

“UP [should’ve been declared] champ because its routine was clean and difficult. It nearly had a perfect run, and it showed unparalleled skill, creativity and everything else,” he said.

“NU was strongest in terms of cheer and its skills also doubled. But it committed errors,” he added, explaining his preferred second placer. “Last to me was AdU. It was not a perfect run but among the other teams it was clean and difficult—our tosses were all Level 6 with twisting, and we completed all our pyramids and other elements.”

The criteria looked fair, Estelita said, but he noted that many in the UAAP community did not agree with the judges’ scores. Last year’s results seemed more realistic, he commented.

“They could have based a lot on aesthetics and somehow held back with the skill-based criteria,” he explained. “For some who saw the scoresheet, the figures didn’t make sense.”

He did not agree with AdU’s   second-to-the-last rankings, as he believed its routine was more difficult but cleaner this year.

For 25-year-old Regie De Jesus IV, who since age 18 has been coaching the squad Estelita joined in high school, the scoring for pyramids was questionable. He did not think NU deserved the top score in pyramids because of its errors.

However, he had no qualms about NU garnering the highest scores in stunts, tosses and tumbling.

In fact, the coach of regular NCC contestant Taguig Science High School-Sinag Pep Squad agreed with the outcome. “For me, NU deserved its spot, as well as UST and UP.”

“We have to consider the criteria for judging. [It is] 400 points for cheer, 400 points for dance, and pyramids are just one-eighth of the overall score,” he explained, reacting to comments that NU’s pyramids fell apart several times.

If anything, he said, the NU routine was very difficult—that alone could have pulled up the team in the cheer department.

Strategically concentrating on dance, which it topped, UST appeared safe only because the team’s cheer elements were not as daring as others in the CDC.

The Cheerdance Competition and National Cheerleading Championship have very different pointing systems, De Jesus explained. This can be gleaned in their names alone—cheerdancing versus cheerleading.

“In the NCC, dance is not really a big part of the scoresheet,” said De Jesus, “since it focuses more on what it calls ‘basic elements’—dance, jumps, motions, etc. The scoring for basic elements is equal to the scoring of the other cheer elements such as stunts, pyramids, tosses and tumbling… [It is] unlike the UAAP CDC, in which dance is 50 percent of the overall score.”

The UAAP contest put greater importance on dance, he noted. Therefore, spectators relied on the wow factor of stunts and pyramids, the judges had to look at a lot more.

Said Escalante: “The NCC is very technical. Even minor errors are deducted, visual impact counts. With stunts, all areas have points—transition, mount/dismount, group stunt… Even the flyer and base get separate scores in the NCC. Everything has to be clean.”

She did not agree with UP’s final standing, but she noted some areas where the team needed to improve—some stunts were shaky, the tumbling sequences were too short, tosses were not as high as they were in the past.

That UP did not win was disappointing, she said, because “it used the mats to advocate something socially relevant.”

Ultimately, what all this passion means is that cheerdance is winning more and more #Puso.

“Before, people saw it as a simple cheer-and-dance performance just to represent your school,” said De Jesus. “You can compete anywhere you want as long as you have a simple routine… Now, people consider it a competitive sport. And just like any sport, you can’t just join a competition without proper training.”

Estelita pointed out: “I think it is right to say the Cheerdance Competition is getting more intense by the year. Every team is becoming better… For the Adamson Pep Squad, let’s just continue reaching for that podium finish. It’s been 14 years since the last one. We need to do our best to get there.”

As for UP, the eight-time champ promised to be back with a vengeance.

(The author is an avid spectator of the UAAP Cheerdance Competition every year.)