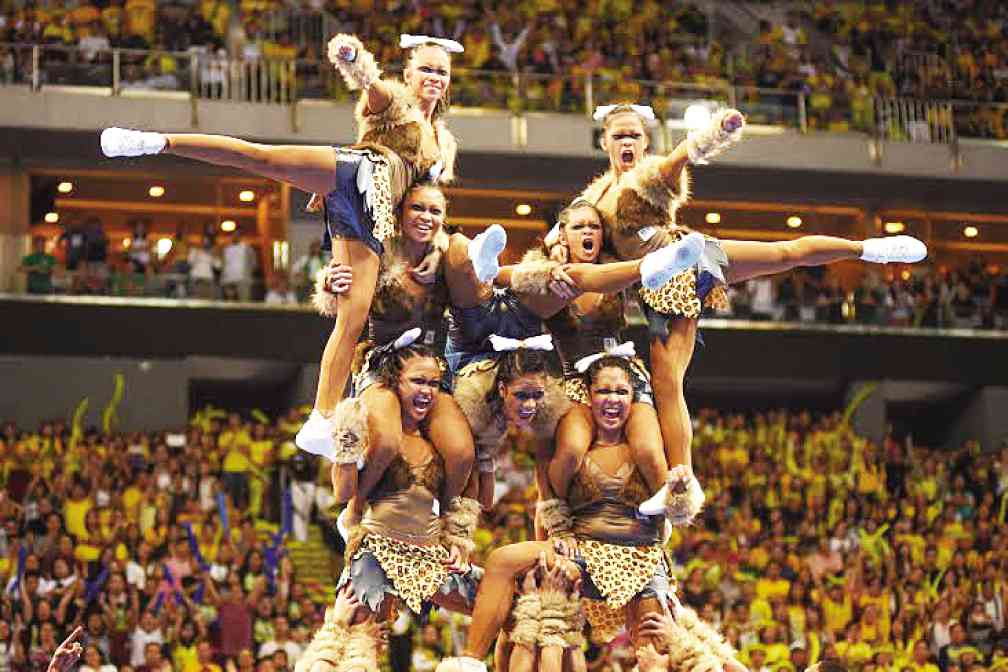 NUWAS the only team to have a fourth pyramid. MARTIN SAN DIEGO

“F-E-U! F-E-U!” chanted the crowd after the UST Salinggawi Dance Troupe was announced second-place winner of the 2015 UAAP Cheerdance Competition last Saturday at the SM Mall of Asia (MOA) Arena.

Members of the FEU Cheering Squad lifted their heads and scanned the audience with big smiles on their faces.

While the scene said a lot about FEU’s performance, it also revealed the crowd’s sentiment towards the winners of the event, particularly the NU Pep Squad.

NU beat its own drums furiously, to drown out the chants of its opponents and remind the audience that its pep squad is the defending champ and gave the most jaw-dropping stunts in the competition.

A short-lived chant of “Luto! Luto! (Rigged! Rigged!)” was heard as members of the NU Pep Squad went to the podium to collect their third consecutive championship trophy.

Soon after, social media went on overdrive. Some posts were funny, others were downright mean. With accusations of cheating and being robbed, the frenzy could almost be compared to reactions after Philippine elections.

It was not surprising that NU Pep Squad coach Ghicka Bernabe was defensive when she was interviewed by Inquirer.net and other media.

“We knew that even if we made a mistake and had minor or major flaws, we had the highest level of difficult stunts,” she was quoted saying.

She then explained why NU deserved the championship. She had to say it; fans had already painted her team as the villains in the story.

History is partially to blame for the fans’ fury.

In the heyday of the so-called rivalry between the UP Pep Squad and UST Salinggawi Dance Troupe from the late 1990s to the early 2000s, the name of the game was perfection.

The numbers show how these two teams mirror each other in skills.

It can be said that one could tell the victor by simply counting the obvious and major mistakes of other cheerdance teams. This explains why fans cheer whenever another team wobbles and falls.

Hence, the deafening cheers from fans of other teams whenever NU committed mistakes.   NU’s obvious flaws occurred during its second and third pyramids. When the squad members failed to form on the third pyramid, fans from rival schools practically wrote NU off. Six points were deducted from NU’s score.

Yet NU also completed several difficult stunts—including a toss that started off as a basic scorpion lift. The four flyers maintained the scorpion while they rotated mid-air, and they did it in perfect unison. It was beautiful.

What NU did last Saturday was change the game.

Victory no longer depended on the mistakes committed by the team that was considered a threat. Winning was based on how far a team could take the level of difficulty of its routine.

But UST did the math before the competition—focusing on dance instead of going head-to-head in stunts. Dance is, after all, 50 percent of the total score.

Cheerdance is not part of the tabulation of scores for the overall championship of the UAAP. Still, dancers train the whole year for a five-minute routine.

It may be over, but exchange of low blows will go on, as will the hate among hardcore fans who don’t see how teams congratulate each other behind the scenes.

Maybe next year, teams should incorporate sportsmanship into their showmanship. And then we can stop hating whoever wins.

(The author has been a Salinggawi Dance Troupe fan since grade school.)