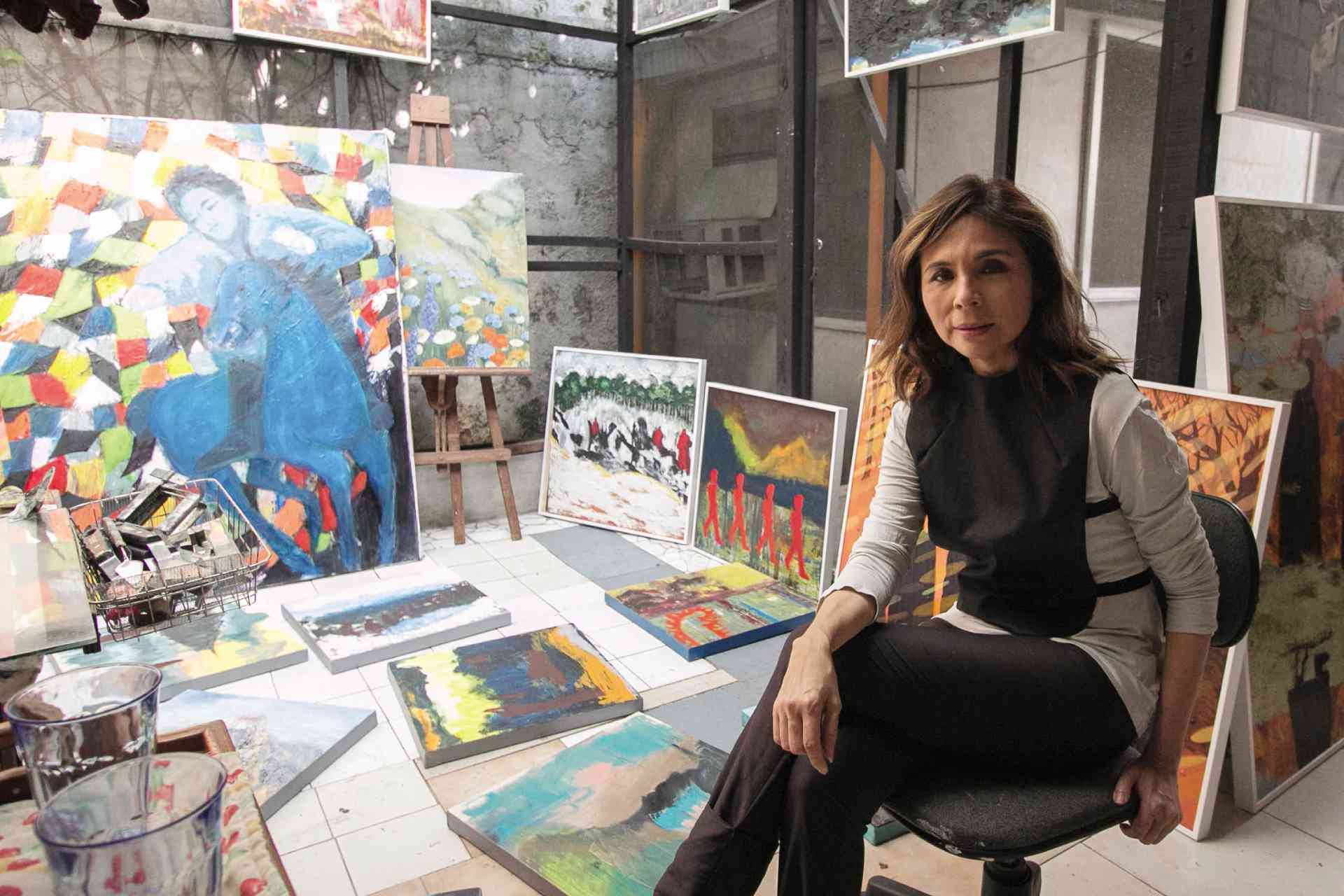 MARIKO Jacinto at her studioPHOTOS BY ALEX CORPUS

‘Tibet on my mind’

Five years ago, painter and Buddhist practitioner Mariko Jacinto went on a pilgrimage to Tibet and took a side trip to Rongbuk Monastery at the Everest Base Camp to explore how China controlled the monks.

In Lhasa (capital of the Tibet Autonomous Region), she sought solace in Jokhang, Tibet’s most sacred temple; learned more about Buddhism history at the World Heritage Site of the Potala Palace; and visited Drepung Monastery, the largest in Tibet, which was closed down after monks dissented against the abusive Chinese authorities in 2008. (It was reopened in 2013.)

Moving on to Shigatse, Tibet’s second-most important city, she marveled at the vestiges of the once grand architecture of the Tashilhunpo Monastery, which was partially destroyed by the Chinese. Then again in Gyantse, she witnessed how Tibet was slowly losing its culture to the modernization of China and how the Chinese scrutinized the activities of the Buddhist monks.

The snow-covered crags of the world’s tallest mountains, the domination of the Chinese soldiers, and the contemplative nature of the Buddhist monks left an impression on Jacinto’s mind. These images became the inspiration for her exhibit, “Tibet on My Mind,” at the Artistscape of the Ayala Museum.

For over 60 years, the Chinese have wrested control over Tibet whose rivers supply fresh water to Asia. Its resources boosted China’s political power. Jacinto saw the similarity in our context: The Philippines and China have been disputing over territorial rights in the South China Sea. Moreover, China’s increasing control over air and sea space has posed international security concerns.

Jacinto works in a studio of a postwar house in Paco, Manila. Clad in a gray shirt with a black Martin Margiela bib and Helmut Lang pants, she shows us some 20 canvases that recall her trip to Tibet. She says the Chinese military monitored the Buddhist monks from rooftops and buses. Still, the monks maintained their equanimity and continued their daily rituals of meditation.

Taking to impressionism, abstraction and surrealism, Jacinto portrays such vignettes with moods that range from the serenity of the monasteries to the loneliness in the landscape. Monks in alizarin crimson—red that is closer to purple—discuss their sacred text in the maze of skeletal trees, set against ochre mountains, sage green forests and a cerulean sky. Their reflections are cast on a quiet pond.

The calm demeanor of a reclining monk floats in a background of yellow and gold. In another canvas, a meditating monk is bathed in bliss as yellow sunrays dapple diagonally across the canvas. A happy monk dances over the rooftops under a veil of snow. Pink-colored monks parade in a landscape of blue and green.

Jacinto captures landscapes as in a postcard, such as the sacred Lake Yamdrok, painted in aqua, surrounded by dark mountains and the icy stacks on the Karola Glacier that encircles Yamdrok.

In contrast, the snowcapped Mount Everest is depicted in blue and white while the town at the foot of the mountain is a foreboding cityscape—a reflection of how Tibet’s ancient traditions are being eroded by materialism in the modern world.

In another work, red soldiers stand on a file, as if imposing control over Tibet, in a background of cadmium orange, blue and yellow.

One surreal image portrays a woman smoking with wisps that wrap the ice caps of Everest. Jacinto attributes that subject to a smoking habit that she had kicked.

The artist combines the breadth of impasto strokes with fine lines to define architectural elements. She is partial to mixing partial to Prussian blue, taupe and cadmium yellow.

Asked why the topic, Jacinto waxes philosophical that these scenes may disappear as the world changes rapidly, for the worst. “Life is ephemeral. Everything is illusory. Sometimes the painting is more real than life,” she says.

“Tibet on My Mind” will be on view until Oct. 15 at Ayala Museum. Proceeds will go to the Rotary Club of Dasmariñas.