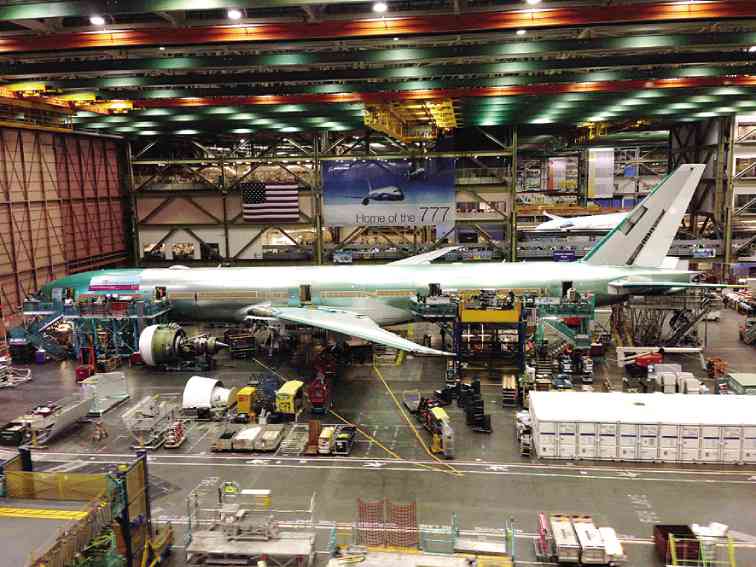 THE 777 comes together at the Boeing Factory in Everett, outside Seattle,Washington.

Now I know what Madonna feels like. Or Mariah Carey, or any other superstar, for that matter, who gets to fly with friends in her own plane. As Cathay Pacific Senior Purser Karena Ho said while pouring us champagne, “We’re having a party in the sky!”

Not that we were doing anything naughty, but we were certainly having a good time, exploring the new aircraft and chatting up new-found friends. After all, it’s not every day that 30 journalists from nine Asian countries get to accompany a new airplane from factory to home turf across the globe.

In this case, we were joining 10 engineers and 10 crew members on the maiden flight of Cathay Pacific’s shiny new 777-300ER from Boeing’s Everett Delivery Center outside Seattle, Washington to Hong Kong.

Cathay Pacific brought media to the heart of operations of their long-time partner, Boeing, to show us how these flying behemoths are made; marked the delivery of their 70th 777 aircraft and 53rd and final 777-300ER with an elegant dinner high above the city, with stunning views of the Puget Sound; and flew us home with a specially chosen crew (including a Filipina; see sidebar).

In fact, as James Tong, Cathay Pacific’s amiable director of corporate affairs, joked when he first saw the plane at the delivery center: “I see this, and I know I’ve been in the right industry for the last 28 years!”

It all began a couple of days earlier, with a long-haul flight from Manila to Seattle via Los Angeles and Hong Kong, with a delightful stop at The Pier, the airline’s first class lounge at the Hong Kong airport. We crashed early in our Seattle hotel after a welcome dinner at Ray’s Boathouse, where Cathay staff celebrated the company’s 69th birthday. With the new acquisition, the airline now has the largest 777 fleet in Asia.

The next day took us to Boeing’s Dreamliner Gallery, where Tong took the floor to talk about Cathay Pacific, the Hong Kong flagship carrier founded in 1946, which now flies 148 planes to 189 destinations in 51 countries, shuttling some 110,000 passengers every day. Tong noted how the aviation industry is “extremely important” to Hong Kong, contributing some HK$138.5 billion (that’s P832.70 billion) to the national gross domestic product.

Then again, Hong Kong’s slick Chap Lek Kok Airport is ranked no. 3 in international passenger traffic in the world, next only to Dubai and London. “That’s amazing for a small city of 7 million people,” said Tong.

He also discussed how the airline schedules its dizzying number of flights in “connecting waves,” precisely timing arrivals and departures. “We organize the hub so that passengers have more choices, and are able to connect with shorter layovers.” Foreseeing even more growth, Cathay Pacific has poured a mind-boggling HK$180 billion (US$25 billion) into 70 new aircraft until 2024, including 21 Boeing 777-9Xs.

So why the big fuss over the 777s? That was a question for Cris Tasche, Boeing’s 777/777x product marketing leader, to answer. The company delivered its first 777 in 1996, and the plane was considered an “immense leap” in aviation technology as the first aircraft using completely computer-aided design, made from high tech composite materials that made it faster, lighter and more fuel-efficient.

The 777-300ER (for Extended Range) is actually the industry leader in reliability—which means it’s on time 95 percent of the time. You can credit cutting edge aerodynamics—for the plane geeks, think of a divergent trailing edge design that reduces drag and improves fuel use by 2 percent.

The comfortable interiors also make it a passenger favorite, as our wonderful Business Class pods proved; you could watch movies or doze off completely horizontal without seeing much of your neighbors. “The plane lends itself to really great business and first class sections,” Tasche said with a laugh. “They’re even bigger than the first apartment I ever lived in!”

We also met Elizabeth Lund, the lady who’s vice president and general manager of Boeing’s 777 program and the Everett site. “Cathay Pacific acquired its first 777 in 1996,” she told the media. “And since then it’s been more than just a transfer of people and goods, but about strengthening friendship and cooperation, and connecting people, business, ideas and resources. What a remarkable achievement.” Lund later officially turned over the plane’s keys (oh, so they do need keys to start) to Tong.

That afternoon, after stringent security clearance, we donned reflectorized vests, protective eyewear and earphones, and were in for a treat—a visit to the awesome Boeing Factory, also in Everett, to see how a plane is made. The factory itself is an engineering marvel—39.9 hectares (3.99 million sqm), enough to fit 911 NBA basketball courts or 2,142 average-sized houses; doors the size of an American football field; and 3.7 km of pedestrian tunnels underneath—employees actually jog there when the weather’s bad, reported our guide Mike.

Sixty kilometers of track allow the plane components—such as the 3.5 million parts it takes to build a 777-300ER from scratch in 46 days—to come together smoothly on wheels. It’s so big, the 40,000 employees—many of whom stay for years, and happily retire with one of America’s favorite employers—have six cafeterias, a movie rental and cell phone store, and the world’s largest industrial fire department, among other conveniences.

We did see a slice of nostalgia, literally: a cross section of the iconic Boeing 747, the world’s only two-storey aircraft and the pinnacle of luxurious flight when it was first built in 1968. Many are still being used, as the jumbos last an average of 40 years.

Worth mentioning were the gorgeous starter, a roasted beet and carrot salad with feta cheese, cumin and a sweet and sour vinaigrette that went perfectly with a 2013 grenache blend shot through with pomegranate; and dessert, a chocolate fig tartlet with an incredible bittersweet goat cheese truffle, black currant and fresh figs, matched with a 2011 cabernet sauvignon. Of course, the champagne didn’t stop flowing, either.

The next day, after a quick visit to the Seattle landmark, the Space Needle and some shopping for Boeing souvenirs (read: a fridge magnet that says, “If it’s not Boeing, I’m not going!”), we had the special experience of boarding the new plane from the delivery center, which provided its own immigration and security check minus the long lines.

Before that, of course, there were photo ops galore with executives, staff, pilots—Captains Daryl Soligo, Henry Craig and Annabelle Cochrane and first officer Mawgan Grace—and the cabin crew chosen from among the airline’s 10,000 cabin crew members to accompany this prestigious flight.

Samuel Chan, in-flight service manager and a Hong Kong native, was the man in charge, a firm believer in Cathay Pacific’s motto of “service from the heart.” “Inside an aircraft, you have limited space and limited resources, so you have to make the best of the situation and still give passengers what they want,” said this 30-year flight veteran, who has seen everything from drunken passengers to potential security threats.

Of course, the buck stops with him, but he would also rather “empower the crew to learn to handle situations, and not keep looking for their seniors.”

Finally, it’s good to know that Cathay Pacific is actively seeking “greener” ways to fly, being the first airline to offer a carbon offset scheme. Based on International Air Transport Association guidelines, they’re aiming for neutral carbon emission growth by 2020, and 50 percent reduction over 2005 levels by 2050. “We’re investing in more fuel-efficient aircraft, and that relies a lot on new airplane technology,” says Tong.

Even Madonna would be impressed.