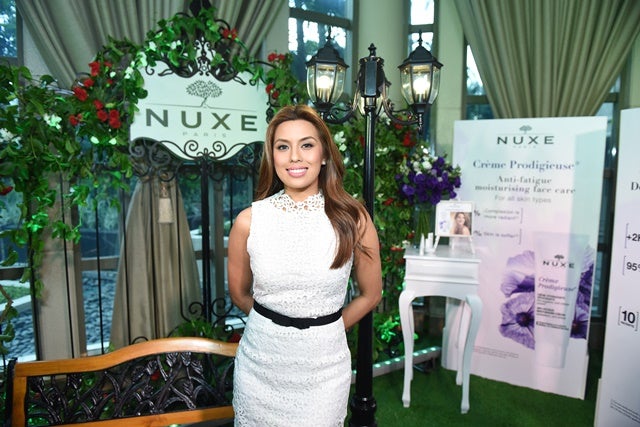 There are two schools of thought when it comes to pampering and skincare. First is the one that believes in luxurious and elaborate, multistep rituals, like the Japanese and Koreans. The other is the one that sticks to effective but easy, quick and fuss-free routines, like the French.

When Aliza Jabès created Huile Prodigieuse in 1991, the Parisian entrepreneur was pregnant with her first child and wanted an easy, all-in-one product. Huile Prodigieuse was made of six plant oils formulated to nourish, soften and repair. It was non-greasy dry oil made for the hair and body.

Soon enough, it would become the star product of Nuxe, the pharmaceutical beauty brand Jabès built with her father, a pharmacist, on the same year, and still the No. 1 brand in France in its category, according to Sophie Moisdon, Nuxe’s international operational marketing director.

Moisdon and the Nuxe (pronounced nooks) team were in Manila to launch the brand with local partner Rustan’s and introduce its local brand ambassador, singer-actress Nikki Gil.

Nuxe has an expertise on floral cosmetics, where it has 45 pending patents. Its strength is “natural actives products, performance and sensorial experience,” for which it has won over 211 national and international awards. The name Nuxe is a contraction of “nature in luxury.”

Unlike in Asia, where basic skincare means up to nine or 10 steps, the concept of Nuxe caters to the Parisian way, which calls for the exact opposite, Moisdon said.

A moment to yourself

be easy, efficient, enjoyable, just a moment to yourself.”

Its founder, Jabès, was a young woman of 25 who had just finished her MBA in New York when she went back to Paris in the early 1990s. She and her father acquired a small R&D lab called Nuxe and began creating revolutionary pharmacy beauty products that are now sold in 74 countries, including Japan and South Korea. It’s still a family company.

Huile Prodigieuse (pronounced whil prodizhoos) was quite revolutionary in 1991. In France, it has been copied “quite a bit.” It claims to have 98 percent botanical ingredients, and is preservative-free with no pore-clogging mineral oil or silicones.

It’s safe for all ages, such that Moisdon uses it even on her kids. And because the oil has such a scent that customers kept raving about, they also created a fragrance called Prodigieux Le Parfum. It looks at trends, especially those in new cosmetics trendsetters like Korea, “but we also listen to what women want,” she said.

“Nuxe isn’t a luxury brand, it’s an affordable brand,” she added. “But it’s a good alternative to super expensive brands.” A 50 ml bottle of Huile Prodigieuse is P995. The priciest, from the antiaging range, retails for under P3,000. The entire line is sold at Beauty Bar, and Rustan’s Makati and Shangri-La.

Its packaging is simple because “the richness of the product is the product itself. We’re also environment-friendly, so we only use light materials and 75 percent recyclable.” Everything is made in the Nuxe lab in Paris, which now churns out 65 products that include an antiaging range as well as a whitening line for the Asian market.

“There are different perceptions of beauty. For us French, aging is about the lines on our face. In Asia, it’s all about the complexion.”

Moisdon recommends the Nuxellence Eclat youth and radiance cream and Huile Prodigieuse, which she uses, and the Rêve de Miel lip balm, which is matte and honey-based. It’s her lipstick primer and all-day lip moisturizer.

“I put it on my kids when they have a boo-boo. They call it the ‘magic cream,’” she said. Even makeup artists use the balm as base both for lipstick and eye shadow.