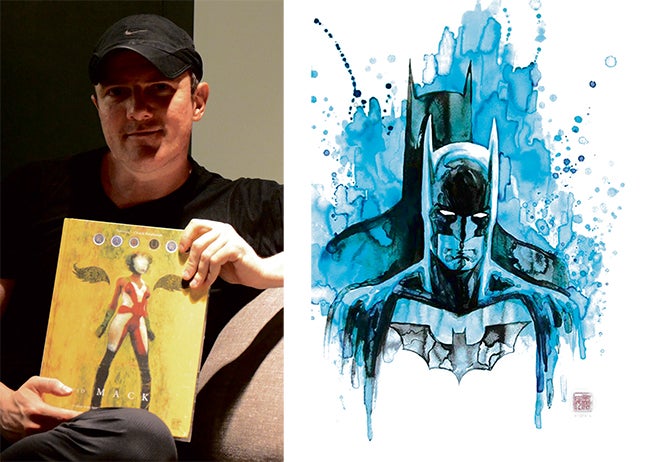 Just how good is David Mack? The über-talented comic book writer and artist can add danger to the stuff of dreams. Basically, the guy “weaponizes” creativity, mixing beauty with blades.

One can easily sense this from Mack’s work on his creator-owned masterpiece “Kabuki,” as well as his famous run on Marvel’s “Daredevil.”

But there were no sharp edges or raw instincts when he flew in to meet and greet his Filipino fans during the AsiaPOP Comicon at the World Trade Center in Pasay recently.

He enthusiastically remembers the encounters on his first trip to Manila. “It was amazing,” he says. “Over the years, I’ve gotten a lot of mail from the Philippines. In the back of ‘Kabuki,’ I would have letters columns and I would often print mail, a lot of them from the Philippines. As soon as it was announced I would be here, I heard on social media from a lot of those people who used to write me.”

The excitement was still evident when Mack graced Fully Booked’s Batman Day extravaganza last Sept. 26. He gave a short talk and sat down with happy fans who lined up to meet him at Fully Booked’s Bonifacio High Street branch. He even painted an strikingly distinctive, exclusive Batman print just for the occasion.

The 42-year-old Mack is known to many Filipino fans because of his hypnotically violent work on “Kabuki,” the series which followed a dedicated, sickle-wielding assassin of the same name in Japan. Ironically, “Kabuki” grew out of Mack’s desire to do autobiographical stories.

It was while in college at Northern Kentucky University when he began weaving the story of “Kabuki” for his senior thesis in literature. The graphic design major fell into it after taking a Japanese language class.

Mack—a big fan of autobiographical comics such as the work of Harvey Pekar and R. Crumb—still considered himself too young and self-conscious to write in the same genre.

“So I decided to tell an entire story through metaphor,” he recalls. “I was going to make a character as different from me as I could on a superficial level.”

“Kabuki” has gone from being an independent title in 1994 to mainstream published by Marvel in 2009; two of four deluxe library volumes of the title are now available through Dark Horse Comics. Two more library volumes are in the works, which would bring the entire series to over 1,600 pages.

Lately, Mack has been working with good friend Chuck Palahniuk, providing all the covers for Palahniuk’s Dark Horse mini-series “Fight Club 2,” the sequel to the fan-favorite 1999 film.

“I also just did some Hellboy-related covers,” Mack says.

All this is proof that he is one of the true originals in the comic book business today.

Mack works almost non-stop. He likes traveling, but “I end up finding ways of using it for work.” That’s a good thing because it enables him to do out-of-the-box stuff, like his work as illustrator/concept artist for the dynamic closing credits on Marvel Studios’ 2014 blockbuster “Captain America: The Winter Soldier.”

He received the offer as he was traveling on Thanksgiving out of the US, and wound up working on a pitch for it while on the plane and on the beach in Fiji.

“I would love to do more movie work,” he admits.

A character that Mack has been very identified with has been hot lately: the butt-kicking, billy club-wielding blind superhero Daredevil, the subject of a critically acclaimed Netflix series. “I tried to add something to the character but also tried to stay true to its history. I think it’s a testament to how strong, interesting and fertile a character Daredevil is that many different people can have different, diverse takes… but it still feels like it’s part of the character’s continuity.”

Having been weaned on the classic “Daredevil” run by Frank Miller and Klaus Jansen, Mack feels fortunate to have been able to work on the same property. “It felt like the current me was collaborating with the childhood me,” he says.

Mack also feels immensely grateful to be working in this industry. “This format of comics is something so unique that there can be many approaches,” he says, “and I like the idea of pushing the boundary of a comic book is. How different can you make it and still consider it a sequential art medium?”

Is there a character Mack would still like to work on? Surprisingly, it’s the Batman. Mack had worked on two Justice League covers with the Dark Knight but has not done a Bat-centric story yet.

He had been offered a chance to do it at one point, but was too busy working on Daredevil with Marvel at the time. “Batman is another fertile character that different people can do unique takes on,” he says. “It would really be fun to do my spin on the character some day.”

In the meantime, he’s looking forward to a bit of time travel magic on his trip back to the States after a helluva time in the Philippines.

“It’s been incredible,” he says.