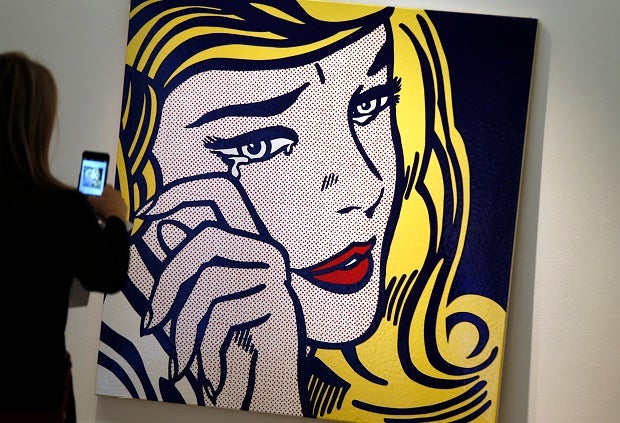 A members of staff at Christie's auction takes a smart phone picture of art by Roy Lichtenstein entitled 'Crying Girl' 1964, as it goes on show in London, Friday, Oct. 9, 2015. The painting is to be sold in New York on No.9, and is expected to sell for some 7-9 million US dollars (4.5-5.8 million pounds sterling). AP Photo

READ: Roy Lichtenstein work to be auctioned in NYC

Christie’s has set the low estimate for Lichtenstein’s iconic “Nurse” at $80 million, but believes it could fetch in excess of $100 million at a specially curated evening sale in New York on November 9.

That would be nearly double the current record for a Lichtenstein, set when the 1963 canvas “Women with Flowered Hat” was sold at Christie’s in New York in May 2013 for $56 million.

The painting, part of the artist’s series of comic book-based images, depicts the face of a woman in a starched nurse’s hat and collar, with blonde hair and full red lips, looking to the side with an expression of mild concern or surprise.

Simple yet mysterious, the square painting, measuring 48 by 48 inches (122 by 122 cm) appears as fresh today as when it was painted in 1964, and the image remains popular across the world.

“Nurse,” from the height of the pop art movement in the US, is a regular in retrospectives on Lichtenstein, who died in 1997 and who was heavily inspired by advertising, comic books and popular culture.

Gouzer called the painting a sister of “Orange Marilyn,” by that other pop art heavyweight Andy Warhol.

“It’s really a masterpiece,” he said.

The canvas was, in fact, once exhibited in the same room as the Marilyn, after it was first bought by renowned pop art collector Leon Kraushar, who also owned Warhol’s “Red Jackie” and “Green Liz.”

The theme of the November 9 sale of 20th century art is “artist’s muse,” and the other star of the show is Amedeo Modigliani’s “Reclining Nude,” never before offered at auction and expected to fetch $100 million, which would set a record for the Italian artist’s works.

The painting, from 1917, provoked a scandal when it was first exhibited at a gallery in Paris, where a crowd gathered outside the window and outraged police ordered the exhibition to shut down immediately.

The auction will be led by Jussi Pylkkanen, Christie’s number two.

It follows record-breaking sales in New York in May, when more than $2.6 billion of art was sold in 10 days.

Also next month, Sotheby’s will sell off the collection of businessman and philanthropist Alfred Taubman, who died last April, on November 4, offering around 500 works, valued at more than $500 million.

The following day, Sotheby’s will hold its sale of impressionist works, with the top highlight Pablo Picasso’s “La Gommeuse” valued at more than $60 million.

Christie’s contemporary art sale will be November 10 followed by Sotheby’s the next day, and the fall season will close with Christie’s impressionist art sale on November 12.