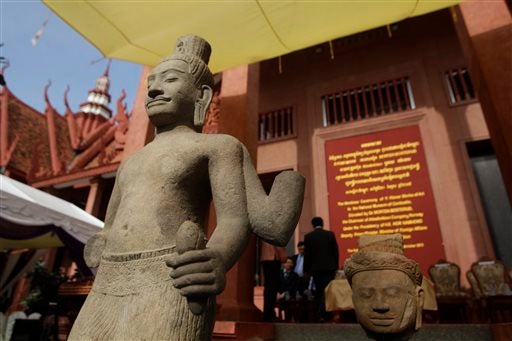 The head of Male Divinity statue, right, and other artifacts are on display during a ceremony after the artifacts were returned back from Norwegian collector Morten Bosterud, at Cambodian National Museum in Phnom Penh, Cambodia, Tuesday, Oct. 20, 2015. Cambodia welcomed home two stone statue from golden Angkor era that was looted from a temple during the country's civil war and spent the past three decades in abroad. (AP Photo/Heng Sinith)

PHNOM PENH, Cambodia— Cambodia welcomed the return on Tuesday of two stone statues from the Angkor period that were looted during the country’s civil war and taken to Europe, where they spent the past three decades.

The sculptures — a ninth century head of the Hindu god Shiva and a late 12th to early 13th century male divinity head — were formally handed over by Norwegian collector Morten Bosterud at a ceremony in Phnom Penh attended by government officials.

“I see myself not as a donor but as a returner of these art objects to their true owner,” Bosterud told reporters after touring the National Museum, where the sculptures will be kept. “I have had time to have a brief look around this museum and it made me realize that my decision was correct, and that my previous thoughts of being a caretaker of these objects were not correct, as I at least was not the best one.”

He refused to say when or how he obtained the statues and how much he paid for them. He only said he has been collecting such artifacts for many years.

Cambodia’s minister of culture and fine arts, Phoeurng Sackona, said the statues are believed to have been stolen from temples in Siem Reap province, which is also home to the famed Angkor Wat temples.

She praised Bosterud for returning the artifacts, saying he had set a good example for other collectors.

“Your noble decision and very kind gesture to return the Cambodian artifacts reflect the support for combating illegal trafficking of antiquities,” she said.

Bosterud also handed over nine other works of art that were copies, not genuine artifacts.

A 1993 Cambodian law prohibits the removal of cultural artifacts without government permission. Pieces taken after that date have stronger legal standing to compel their owners abroad to return them. But there is also general agreement in the art world that pieces are deemed to be acquired illegitimately if they were exported without clear and valid documentation after 1970 — the year of a United Nations cultural agreement targeting trafficking in antiquities.

In June last year three 1,000-year-old statues depicting Hindu mythology were brought back to Cambodia. They were also looted from a temple and put in Western art collections. TVJ