I died and had a funeral: Why Halloween is a busy time at Ocean Park Hong Kong | Inquirer Lifestyle ❮ ❯ 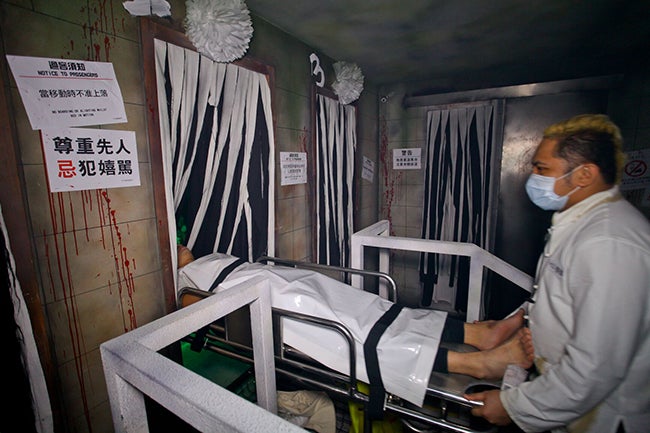 READY to be rolled head first into the H15 horror house, a morgue that takes one to the “underworld.”

I died and had a funeral: Why Halloween is a busy time at Ocean Park Hong Kong

I had my own funeral at Ocean Park Hong Kong, got cremated, and went straight to hell.

That’s the journey in the H15 Horror House—and it’s as creepy as it sounds.

First, they took my photo and I was sent to the “morgue,” a dark, foggy room where a man in a white lab coat had me lie down on a mortuary trolley, the same ones used for embalming bodies. Then he covered me with a “body bag,” and strapped me to the stainless steel table.

It felt so cold against my back that shivers shot through my spine. The man in white hung a tag on my big toe that read: “Irene Perez, time of death: 4:44 a.m.”

That started my immersion into what’s believed to be a soul’s journey into the first seven days after death.

My “corpse bearer” pushed my trolley into several rooms; the freaky part was, I had to go in head first, with the curtains dangling over my face and touching my entire body while being rolling off from one room to another.

I had no idea what would be in the next room as I lay there helpless. Along the way, I saw my framed photo surrounded by flowers, like in a wake.

I was put inside a very narrow tunnel—a claustrophobic’s nightmare. For a few minutes, I wanted to get out; the air was getting hot (I think this is the cremation part), and there were just walls around me, plus I had to stare at a back-lit skeleton on the low ceiling, almost face to face.

All I could hear were screams of agony, and the smell of burning incense got so strong, it was making me dizzy.

H15 was a blur of ghoulish sounds, smoke, red lights, an evil emperor, and what seemed to be bloody intestines hanging from the ceiling. These all happened in 10 minutes, and I was screaming till the last second—till someone in a deep voice said: “Ate, tapos na po.”

Apparently, my corpse bearer is a fellow Pinoy. He unstrapped me, and I got out of the goddamn place as fast I could.

It felt great to be out in the sunshine.

Welcome to Ocean Park Hong Kong, where Halloween is the busiest time of the year. We recently flew to the former British colony via AirAsia and explored Ocean Park’s Halloween Fest (ongoing until Nov. 1) starting off with the H15.

“H15 stands for Horror 15, since it’s Ocean Park’s 15th anniversary, and our scariest Halloween yet,” explained CEO Tom Mehrmann over a Halloween-theme dinner at the park’s Neptune’s Restaurant. “It combines Chinese superstition, tradition and folklore with 3D surround-sound effects for a terrifying experience.”

Online reservation was required to get into H15, which has been fully booked way before Halloween. Walk-in guests still have a lot of horror houses to look forward to such as “The Walking Dead:” Survival zombie house, where fans of the Fox Channel series get to dodge zombies in prison and go through a zombie-infested school bus.

Sadly, we didn’t find a crossbow-wielding Daryl Dixon, but managed to get through the creepy communities of Woodbury and Terminus—and survived.

The Puppet Master’s Deadly Workshop horror house, meanwhile, messes up your childhood with the creepiest-looking dolls, puppets, and—gasp!—clowns. The track is so narrow that the puppets pop up at close range, making this horror house a lot scarier than we thought.

And for a curated scare, visit the 15 Years of Horror house, which features the haunted elevator from Estate of Horror in 2008, the eerie Police Station No. 13 in 2009 and the grisly wedding from Chinese Wedding of the Departed in 2012.

Mehrmann said that every year, Ocean Park Park receives over a million visitors during Halloween season, and it has been a constant challenge to come up with the most frightful features, while at the same time keeping the park family-friendly.

Thus, Ocean Park now has “transforming attractions,” or houses that are wholesome by day, but turn into horror houses by 5 p.m.

The Lolita Mansion, for instance, is the Victorian house of cute cosplay girls you can take selfies with, but by nightfall, they turn into bloodthirsty sirens who seek eternal youth, and lure guests into their bedchambers at the Bloodborne Mansion.

We also had fun at the Toxic Challenge, a 40-meter inflatable obstacle course that reminds us of that “Wipeout” game show (or “Takeshi’s Castle” for you, tito and tita). At night, it’s illuminated with bright LED lights and becomes Mutant Escape, still featuring a climbing wall, spinning wheels and fog machines.

Going around the 91-hectare park and screaming our lungs out made us hungry, so we checked out The Hungry Ghost Festival Set Menu at Café Ocean. We ate chicken and prawn salad with “eyeball” jelly, and lemongrass tomato soup with severed fingers dangling from the bowl.

The main dish was seafood fried rice packed into a tomb dome, complete with an epitaph cookie. Yummy!

At Tuxedos Restaurant, we enjoyed Doraemon cupcakes and cookies for dessert, paired with iced coffee.

After eating, kids can have more fun at the [email protected] Halloween Movies Studio, where they can explore animation visual effects with Doraemon and his friends Dorami, Nobita and Shizuka.

And what’s Halloween without trick or treat? Go to the Pumpkin Trail, an outdoor walk-through where kids can play simple games with elves and fairies, and earn treats and candies.

To chill, watch the Hellympics stage show at the air-conditioned Applause Pavillion. The script is in Chinese, but still entertaining.

Ocean Park Halloween Fest is ongoing until Nov. 1, from 10 a.m. to 11 p.m. Mehrmann gave tips for visitors: “Wear comfy shoes and clothes, go early or buy the premium ticket to avoid lines, and never touch the zombies—they won’t hurt you, but they will definitely surprise you. Scream and have fun.”

Well, surviving my own funeral and journey to the underworld was quite an experience.

Tickets to Ocean Park are available starting at HK$345 for adults and HK$173 for kids at the park ticket office, online at halloween.oceanpark.com.hk and 7-Eleven stores in Hong Kong.

AirAsia operates flights from Terminal 3 between Manila and Hong Kong every Monday, Tuesday, Friday and Sunday.