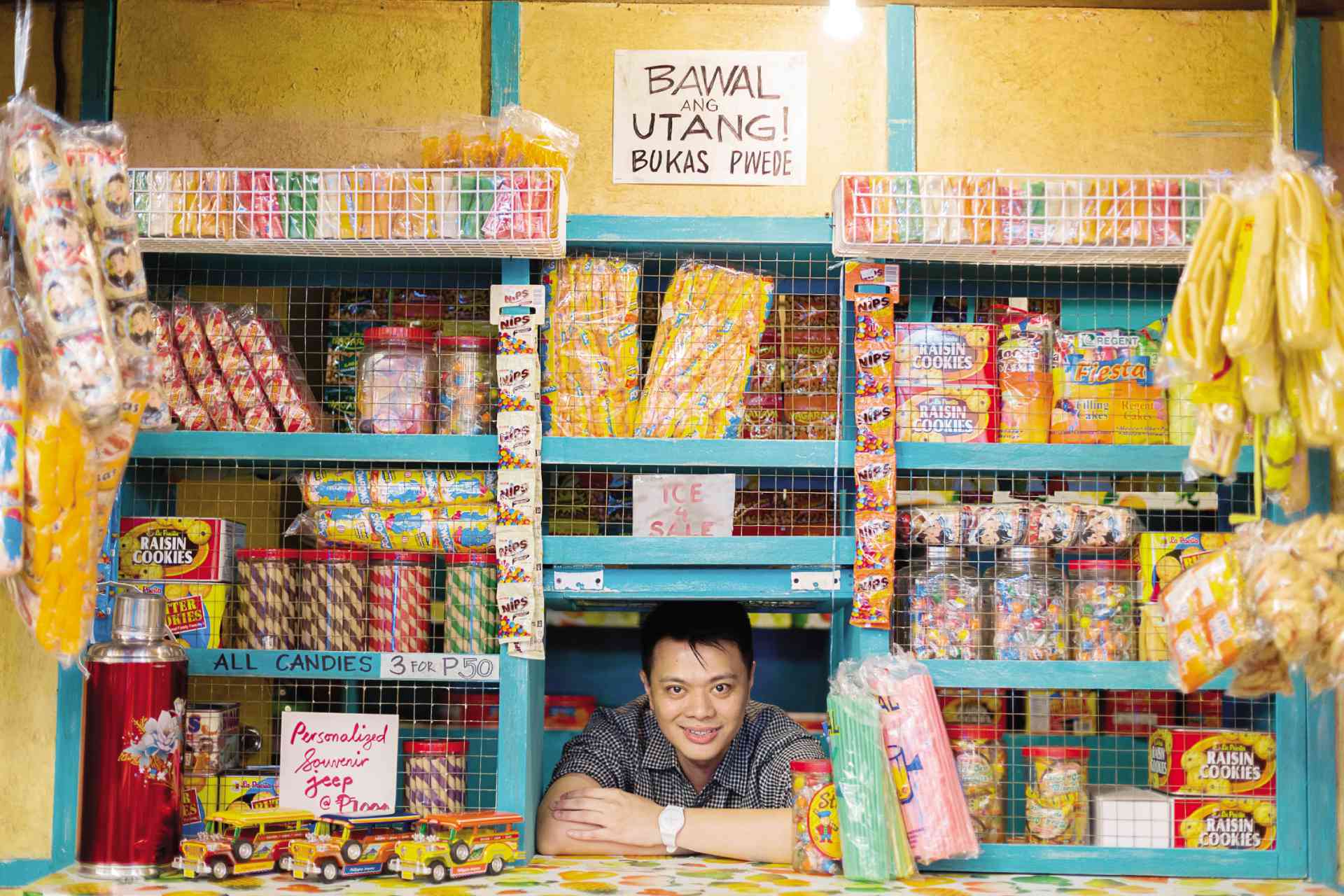 If you ever plan to drop by the Swatch + Swatch Center on Pasay Road these days, leave your stilettos at home. Your heels could slip through the cracks on the makeshift bridge right above the estero by the entrance, as you sashay past the cascading curtains made of plastic drinking straws. God forbid your posh self falls into the clear, blue-lit water!

Anyone who has attended any of the often-swanky, high-arty and celebrity-studded Swatch events in this Makati venue since its opening in December 2014 would be shocked to see how it has once again undergone a transformation: It’s now turned into a typical metro barangay, in the midst of a fiesta, replete with buntings and banderitas, and tables covered in colorful Divisoria-bought plastic mantel, laid out for the traditional handaan at salu-salo.

There are two tricycles parked on a corner, and a fruit-vendor’s kariton. Before our visit, there was even a jeepney at the center of the room when the “Swatch Fiesta” event was held here nearly two weeks earlier, where Swatch pioneer and lifestyle mover Virgie Ramos welcomed delegates from across Asia to the annual Swatch market conference.

It was the first time the event was held outside Switzerland, and Manila was the first leg. (The second will be in Miami, then Milan.)

While the jeepney is gone, most of the setup was kept as it was.

There’s a sari-sari store in the far side, complete with real merchandise, from shingaling to yosi, and Coke to Red Horse. Kulang na lang may nakahubad na tambay.

There’s also a sago-gulaman stand, a popcorn cart, and realistic-looking Meralco electric posts studded with those For Rent, For Sale and tubero ads. Aegis is blaring in the background.

Production designer Gino Gonzales even had vintage ads he found at Lopez Museum—Katialis, Litex—blown up into billboards. It’s the quintessential production set of a TV sitcom a la “home along da riles.” In short, unabashed Pinoy kitsch.

“You have to loosen up and let your guard down,” says Gonzales when asked how the project differed from previous Swatch events he had designed.

“Lahat ng kabaduyan nilagay namin. Jologs! There was even a karaoke machine. When we do events like last December’s ‘Swatch + Art + Fashion,’ it has to be tasteful, avant-garde and high art. This one, you just had to be honest.”

“Swatch Fiesta” was initially envisioned to be a formal sit-down dinner, but Gonzales and crew felt the need to give the foreign guests a unique Manila experience. The always-game Ramos gave the green light.

“At my age, change is always a good thing,” she says with a knowing smile.

“We only subtracted the inconveniences,” adds the prolific production designer—meaning, no “dura, amoy ihi at langaw,” and the ersatz estero’s water is not marshy but blue. Sanitized, yes, but the spirit remains.

Besides, says Gonzales, Swatch is a pop brand, and even its executives are not typical suits.

“Swatch is a cool crowd. We wanted to capture the essence of that,” he adds. The guests were brought to the venue in an aircon jeepney.

As they had hoped, the party was a hit.

Carlo Giordanetti, creative director of Swatch International, was specially impressed by the recycled art, says Gonzales: the PET bottles transformed into floral centerpieces and the curtains made of plastic drinking straws.

On Lifestyle’s visit, Swatch served the same Filipino dishes feasted on by the foreign guests at the fiesta, as prepared by chef Gilbert Pangilinan.

They were all laid out a la turo-turo, and served carinderia-style, in down-home tin bowls and mugs. It’s classic Filipino hospitality, warm and bountiful, stripped of all formalities.

As an interactive activity, the guests were made to create a large parol, which was customized in Pampanga, and now on display on the second floor. For their efforts, each was given a pitaka containing play money to “buy” food and souvenirs in the sari-sari store.

Until end of November

Encouraged by the positive response, Ramos says the Swatch fiesta setting will remain until end of November, when the Swiss watch brand launches BenCab’s second watch collaboration called “Ode to the Flag” to mark his 50 years as a professional artist.

The National Artist, who attended the Swatch fiesta, was reminded of his early days in Bambang with the estero and the works, according to Gonzales.

“Type ni BenCab… I might change it a little, maybe make it a bit more folk and nationalistic,” he adds, owing to the theme of the new watch, which features the Philippine flag.

Eagle-eyed visitors might spot artworks by popular contemporary artists woven into the décor, like Ronald Ventura’s “Eye Land” on the sari-sari store signage, and an Elmer Borlongan just behind the sago-gulaman stand. (Ramos is an avid art collector.)

“Everyone had fun. Lahat ng tao may ka-cheap-an,” Gonzales says with a laugh. Surely the well-heeled included.