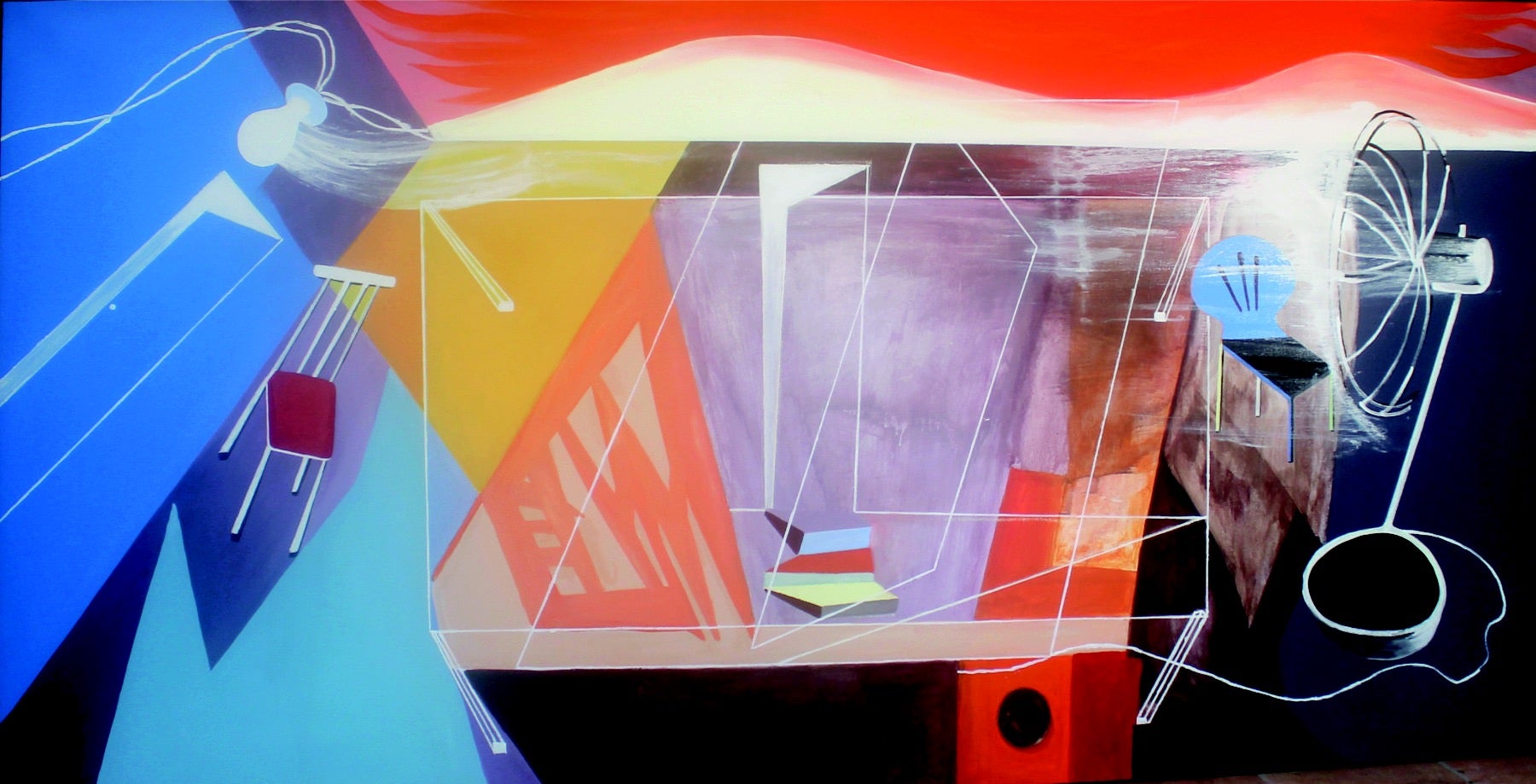 “A CHAIR is still a chair” goes the line in a pop standard about “people who need people.” What’s a quotidian, almost paltry object doing in a song about humanity?

Ask Rene Robles, the adamantly Filipino modern artist with an international reputation who deftly combines representation and abstraction to depict ordinary things, such as a chair, in an extraordinary, almost eerie light.

Along with the chair, the signature images of a Robles canvas are the light bulb and the electric fan.

While furniture and appliance should conjure domesticity and homeliness, they effect the reverse in a Robles work: They conjure alienation and discomfiture, of unease and of someone who can’t sit still. Paradoxically however they also evoke meditation and stillness.

Perhaps the paradoxical emotions they induce explain why Robles’ ouevre is exhibited regularly by Momentous Arts, one of Singapore’s more adventurous art galleries.

An artist in the classic modern mode (he studied at the Fine Arts school of University of Santo Tomas founded by modernist trailblazer and National Artist Victorio C. Edades), Robles endows everyday things, including industrial designs and technologies, and otherwise unpoetic, “unclassical” objects, with the spirit and sensibility of the modern.

His art should find a welcome audience in the Lion City, which has grown by leaps and bounds from a kampong to a global hub of commerce, management and engineering.

At the same time, Robles himself provides a critique of the modernist spirit. Through its restless and reckless drives, that spirit betrays perhaps its bankruptcy of spirit. Athwart it, Robles posits his art of stillness.

The stillness evoked by Robles’ paintings is similar to Giordio de Chirico’s work.

But while the Greek-Italian’s are metaphysical landscapes and interiors, with elements, details and décor forming what seems to be a “painted” precursor to actual installation art, Robles zeroes in on a singular detail, a chair or a set of chairs, a lightbulb or a couple of lightbulbs, around which he builds cubistic interiors with overlapping grids, painted in sharp, bright expressionist colors or, as in the works now on exhibit at Momentous Arts, in near monochromatics, either way providing a mood even more brooding than De Chirico’s. But the effect is the same—a sense of metaphysical stillness.

Of course, De Chirico’s metaphysical art was one of the foundational spirits of Surrealism, which to Rene Magritte, would be nothing but “the destruction of mediocre reality.”

Writing in 1936 and referring to De Chirico’s representative works done a generation before, the Belgian painter was obviously inveighing against “traditional” art and predictable genre works that made up the “civilized world, in which intelligence, depravity, heroism and stupidity jog along happily together,” an “absurd and incoherent world in which arms are manufactured for the prevention of war, science is destroying, killing, building and prolonging the lives of the dying, and where the most insane activity is self-contradictory.”

Against the art of the “civilized world,” Magritte pointed to De Chirico, as well as to Max Ernst, Derain, Picasso and Duchamp, and the art of the Surrealists, as assertions of freedom “from the atmosphere of a world fashioned by centuries of idolatrous worship of money and the gods.”

Freedom, pointed out Magritte, is provided in the dream-state, “which affords our bodies and our minds the freedom they so vitally need.”

That freedom is the core of Robles’ aesthetic of “assertionism,” which, while not hostile to realism and traditional art, emphasizes the heightening of the self and its expressiveness. To some extent, this would be a reformulation of expressionism.

To be sure, because of the dramatic monochrome and the near-abstract rendering and tight and tense composition, the effect is expressionism, a heightening of the emotion that most often would be one of derangement, perhaps of nausea, and even of eerie “suspendedness,’ like a guillotine in mid-fall.

Especially if painted expressionistically, the Robles iconography—particularly the light-bulb and chair—conjures a Koestlerian world of secret police, illegal detention and forced interrogation, and even torture and summary execution.

This may be over-reading, of course, but especially when the two images are brought together in one canvas, and considering further that Robles came of age during martial law, the portentous aura they educe may not be amiss. The Surrealist dream has become a nightmare.

However, it is also true that Robles has done Warholian pop-art renderings of his iconography, and the effect may be cheerful if not trivial and throwaway, much like pop culture and the free market with their aesthetic of advertising and philosophy of immediate gratification of false wants and fabricated needs, their idolatry of commerce and currency, their exaltation of the moment and the momentary.

Robles himself has provided the antithesis to modern art’s celebration of the quotidian and the ordinary, the industrial and the technological. Against modern art’s mantra of the shock of the new, he has asserted the Zen aesthetic of stillness and serenity, as well as the Christian spirituality of contemplation and prayer.

No doubt, great art pushes the viewer to a meditative state, and this quality is not missing in the best works of Rene Robles. Yet eerie, tranquil, or contemplative, what his paintings really assert is the seeming lost art of the pause. And further pregnant pause.