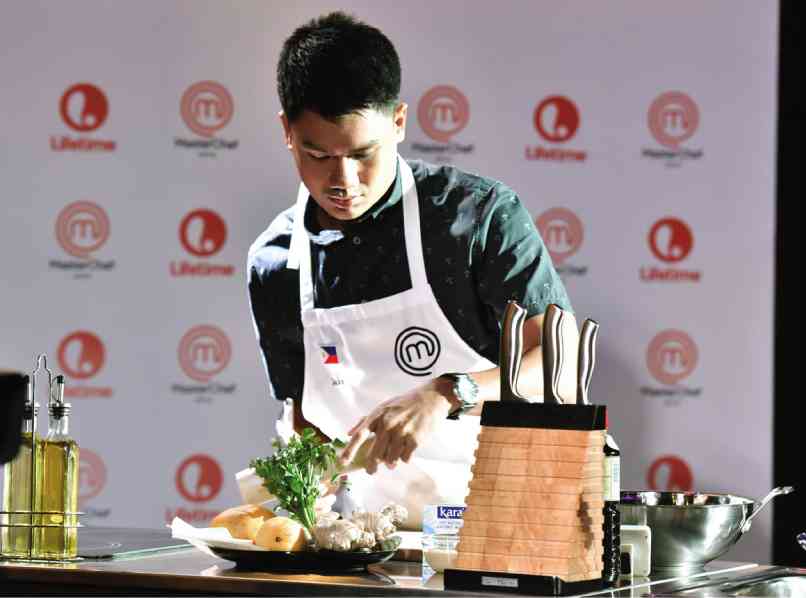 Can two bankers and a paralegal win ‘MasterChef Asia’?

HEY, culinary graduates and experienced restaurateurs: Try whipping up a restaurant-quality dish in 30 minutes or less under blinding studio lights and the constant scrutiny of TV cameras and three of the world’s most successful chefs.

Subjected to a Mystery Box Challenge, where each prepared an original dish using ingredients revealed to them for the very first time, they exhibited true grace under pressure, slicing and dicing radish, shrimp and sweet mango before an audience that swooped upon the trio’s kitchen stations for a closer look.

Still, the three Filipinos remained cool as cucumbers, even as the judges milled around them, grilled them about their techniques, then encouraged the crowd to participate in a countdown of the last 10 seconds.

Aycardo’s Daikon Fettuccini with Sauteed Shrimps earned praises for its vibrant color and freshness. “I love it,” declared Menard in his distinct French accent.

Amancio, who was constantly ribbed by the judges for being so emotional, wowed Lee with his dramatic plating of camaron-inspired Shrimp Balls a la Rico. “This is a true fusion dish,” said Lee, who is known in the culinary world as the Father of Fusion Cooking. “Chinoise a la Filipino!”

In the end, it was Ibarra’s Coconut Butter Prawns with Egg Floss Rice and Pickled Daikon Salad that blew all three judges away.

The only MasterChef in the franchise involving contestants from other countries, “MasterChef Asia” sees 15 amateur cooks from China, India, Taiwan, Vietnam, Indonesia, Malaysia, Singapore and the Philippines vying for the honor of being the region’s first-ever MasterChef.

The prizes aren’t too shabby, either: Besides the chance to publish his or her own cookbook, the winner also receives $50,000; $10,000 worth of leisure experiences in Singapore; $15,000 worth of Panasonic home appliances; a paid internship in one of Carlton Hotel Singapore’s restaurants; and a one-week stay at Hong Kong Disneyland Resort.

The trio, with other Pinoy hopefuls, did interviews and a cook-off at the Center for Culinary Arts and another in Singapore before they were chosen as the country’s three finalists.

That’s a huge achievement, considering these home cooks have neither formal training nor years of restaurant experience.

Aycardo, a product controller in the finance and banking industry, learned how to cook by reading cookbooks and watching YouTube and cooking shows.

“I make my own baon,” explains the 24-year-old (who was eliminated in the first episode), “and it came to a point where I was cooking and supplying lunch for up to 50 people in the office. I turned it into a business.”

Like Aycardo, the 29-year-old Ibarra credits YouTube, food blogs and cookbooks for sharpening her kitchen smarts. “My friends also pay me to cook for them, so I invite them over and prepare dishes in my private kitchen,” says this home cook, a single mom who works in the treasury department of a bank.

Growing up in a small town near Bacolod City, Amancio remembers tagging along with his mother to the market then helping her prepare the family’s meals when he was only 5. Now 31, the home cook was on his fifth year of law school and part of a legal team for a multinational insurance company when he asked himself, “Is this really the job for me?”

Amancio quit law school and his work as a paralegal to join “MasterChef Asia.”

What really goes on in a televised culinary competition? This much they will divulge: There were no catfights. “We learned a lot from them,” says Amancio, “and we showed them that Filipino cooking is much more than just adobo and balut.”

And what about the show’s staple like the Mystery Box Challenge, Team Challenge and the dreaded Pressure Test? “That’s the reality part of the show,” swears Ibarra, a soccer coach for kids and member of the same ultimate frisbee team as actor Derek Ramsay. “You’re really given one hour to cook, and they don’t tell you in advance about the ingredients in the Mystery Box.”