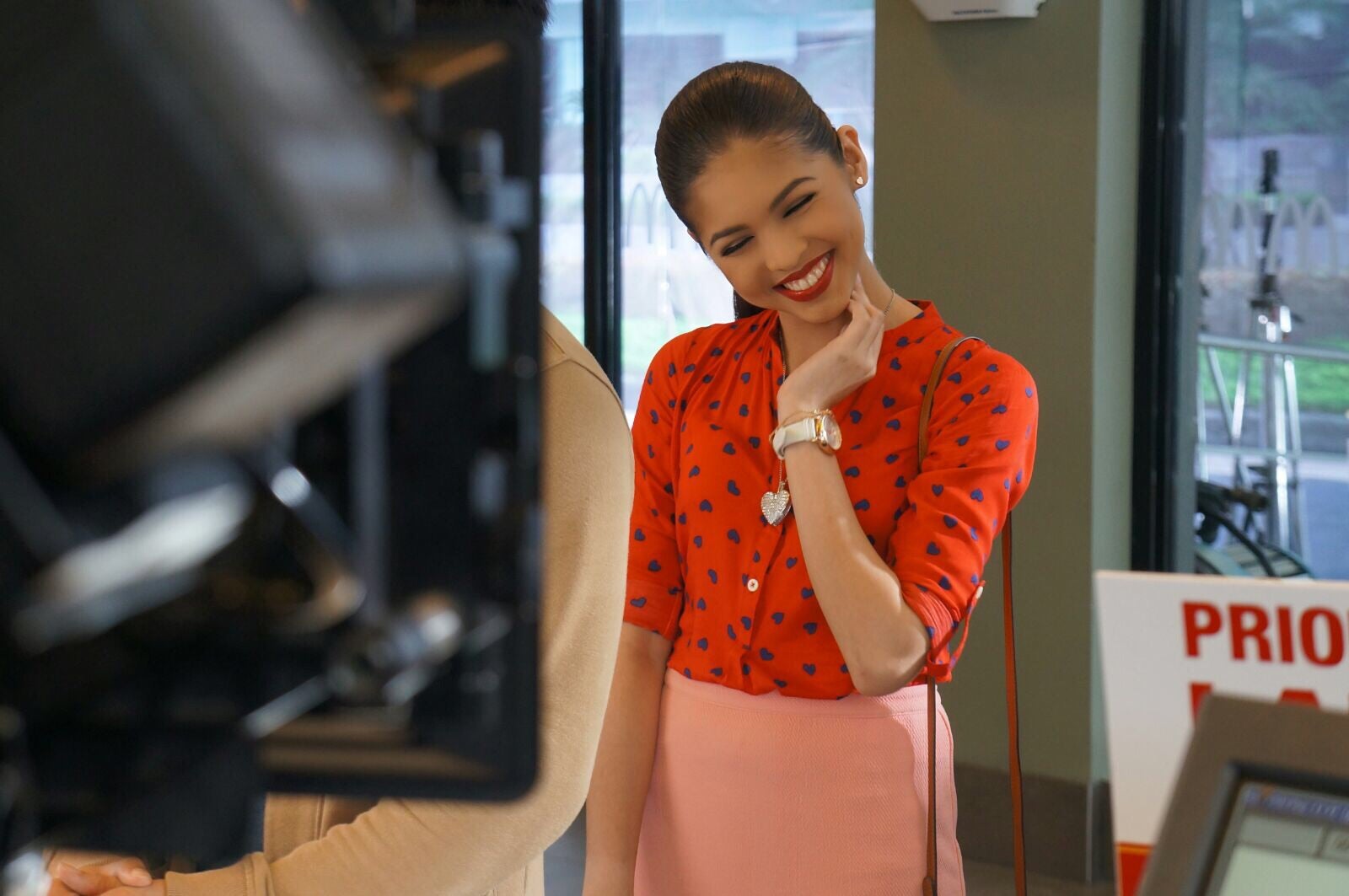 When you think of Yaya Dub’s style, one-half of the TV phenomenon AlDub, you don’t think of that contentious pink ball gown that became the subject of a social media firestorm early this week.

What come to mind instead are her tiered red-and-white polka-dot apron, that ubiquitous fuchsia satchel, her bright-red lipstick, and no-nonsense button-down shirts with sleeves rolled up, paired with skinny jeans and ballet flats.

Alternately, there are those round-neck tees and cuffed shorts, and her fuss-free daily hairstyle of a pulled-back pony.

Yaya Dub’s look is youthful, easy, no-nonsense and befits the character of the AlDub love story’s heroine. She’s an au pair, all right, but she also plays a modern-day Cinderella, such that her character is allowed some concessions not typical of the help: Her boldly tinted lips are a signature and her nails are always immaculately manicured.

That she’s allowed to wear casual clothes, not those shapeless nanny uniforms sold in supermarkets, is also notable. Only on television.

As the comedienne, Maine Mendoza, 20, and her TV character’s popularity continue to rise and endorsement deals pour in, her management company, Tape Inc., has now tapped the services of a celebrity glam squad to create a look that’s consistent with Yaya Dub’s style.

The three have been behind Mendoza’s looks in her new TVCs, and they also worked together for the “Tamang Panahon” concert last Saturday, which drew a reported 50,000 fans to the Philippine Arena in Bulacan.

The style brief was to “not veer too far away from the Yaya Dub character, but also not an exact copy,” according to Uy, whom we interviewed via phone from Shanghai. An in-house wardrobe stylist works with Mendoza on the TV show.

For a fast-food commercial, for instance, Uy and her StyLIZed Studio team put Mendoza in denim overalls to mirror the silhouette of her omnipresent apron on the “Eat Bulaga” segment.

In another, she wears a red button-down shirt with navy heart prints that mimic the dots on Yaya Dub’s apron.

The Peter Pan collar also makes a frequent appearance in the wardrobe selection, including the white sleeveless top she wore under a Rosenthal Tee dress to a production number in the concert.

“That dress was backless but since Lola Nidora”—Yaya Dub’s employer—“is conservative, we had to layer a shirt over it,” said Uy.

And that’s how Mendoza’s look will continue to be, she added—no bandage dresses or overtly sexy clothes.

Instead of high heels, Uy shod her in white sneakers to match those worn by her “bae” Alden Richards.

They were going for modern-day prince for Richards, thus the coattails, Uy said. Owing to the show’s fantasy-reality theme, Tuviera created luxe, big curls on Mendoza’s mane, akin to a fairytale princess.

Uy styled the AlDub duo for the concert. It was a last-minute job; they were given only a week to put the couple’s wardrobe together, she said.

Given the short lead time, Mendoza’s outfits for the concert were a mix of customized and pullouts—fashion-speak for loaners from brands/designers—since it’s customary to have several options for such events.

At the fitting, they all decided on the pink beaded number by Francis Libiran, as it fit the Cinderella theme best and it stood out in the arena, explained the stylist. The vastness of the venue called for a “big” dress. It also complemented Richards’ look.

The giddy fans lapped it up, and Uy admitted her annoyance at the controversy that came after.

“It’s evil… Ayoko nang patulan,” Uy said of the ensuing talk that the look was “recycled.” Actress Kim Chiu had worn the dress as a guest model at Libiran’s collection show two years ago.

“We worked hard especially since we didn’t have a lot of time, so why would we sabotage our own work? Just the same, I apologized to Maine and her management and they understood. To them, it’s a non-issue.”

According to Uy, November will be “a very busy month” for Mendoza, whom she’s styling for several projects.

“We’re sticking to her look,” said the stylist. “She’s young and easy to dress up. Parang Barbie. She’s very down-to-earth, and she’s vocal about this being all new to her—having her own glam team.”