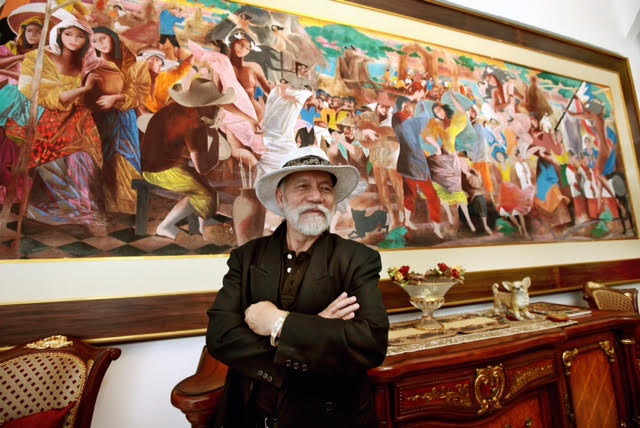 ATANACIO “Tam” Pefaranda Austria, before one of his folk murals,as photographed by Jose “Pinggot” Vinluan Zulueta

Folk yet modern, Tam P. Austria is a true heir to ‘Botong’ Francisco

TWENTY-FIFTEEN has turned out to be a thoughtful season of artistic retrospectives, and on the year when the Cultural Center of the Philippines (CCP) paid tribute to Jaime de Guzman and the Metropolitan Museum is hosting a retrospective of National Artist Benedicto “BenCab” Cabrera, Tam P. Austria is coming out of the woodwork to hold a solo exhibit of old and new works at the Makati Shangri-La.

Along with the opening of the exhibit on Nov. 8 is the launch of long overdue book on the man and his art written by the highly respected art critic-historian Alice Guillermo. Title of the book is “Zeal for Art”; it contains an essay by Austria, “The Inspirer.”

Not that Austria has made himself and his work scarce in the past years. He rarely exhibits since however prolific his output, his works are easily snatched up by collectors that count legions.

What joins De Guzman, BenCab and Austria together? None at first blush. When the first two became the initial batch of the Thirteen Artists Awards of the CCP in 1970, they were joined by an “Austria”—not Tam but Antonio “Tony” Austria.

And with his namesake, Austria shared with Tony not only their training in fine arts at the University of Santo Tomas, but also their folk penchant for covering the entire field or canvas with elements of different shapes and colors, what some may call as the artistic guise of the proverbial horror vacui of Filipinos.

Moreover, Tony may likewise be considered a folk artist like Austria. Although his subjects are drawn from the urban every day—vendors, fortune-tellers, jeepneys— Tony likewise reveled in fiestas and processions. It is true however he has none of Austria’s signature cult of women. But the two share a very strong folk sensibility.

But perhaps more than the three CCP Thirteen Artists Awardees, Austria embodies in his person and his art the essential rootedness of the folk artist in his geography—physical, social, cultural and spiritual.

Like National Artist Carlos “Botong” Francisco, his early teacher and career guide, Austria is a “nature artist,” an artist of the local, the native and the natural. In one interview in fact, Austria referred to himself as a “naturalist.”

The comparison with Francisco may be jarring considering the National Artist is best known for his murals while Austria is almost always identified by his women-figures. But not too many people know that his early commissions were murals—for the Santuario de San Antonio in Forbes Park. He has also done mural-size depictions of multiple women-figures.

Before his women-figures, Austria was known for his folk genre works, particularly of the familiar old sight of the family travelling in a bull cart with all sorts of woven crafts hanging (the sight has disappeared now in Metro Manila) in every corner.

Austria’s obsessive meticulousness was evident: The detail of the woven baskets was executed in tompe l’oeil style, and the rich depiction of the bull cart, which functioned as both family abode and travelling goods store, would result in an art of cornucopia and claustrophobia. The sense of constriction would be balanced by Austria’s very astute sense of composition.

The women-figures, often depicted with infants (a folk reinvention of the Madonna and Child), are idealized portraits of the Filipino woman, garbed in folk costumes, their heads even covered by native bandannas, framed by bamboo or native wood stalks, surrounded by the bounty of nature like fruits, vegetables, fish and even shrimps, all of them again rendered in striking trompe l’oeil.

The Tam Austria woman is sinewy, slender, elegant and graceful. His are idealized portraits without none of the cult of the ugly fostered by high realism or postmodernism. Like El Greco and his own brand of figurative expressionism, Austria endows his women with spiritual fire.

Francisco has inspired a school of his own, although a cult around an artist may not exactly apply to the lakeshore artists. But for purposes of easy classification, we can tentatively call the Rizal-Laguna artists as the “School of Botong.” Austria himself is founder with Jun Tiongco of the Tanay Group in Rizal, a sub-school if one may call it that.

By and large, the Botong School would also include Jose Blanco and his children, Manuel and Angelito Baldemor, Nemesio Miranda, Manuel Unidad, Jimmy Vista and perhaps even Jaime de Guzman, who hails from Liliw, Laguna.

Austria said he remains a “proud resident of Rizal province.” He now lives in Antipolo City where he continues to be at the hub of the lakeshore vibe. He explained his art has been largely formed by the “community.”

“Community, I think, played a greater role than what I learned in college,” he said. “Because within the community, artists can find the spirit of encouragement and they can learn how to enhance human interest.”

Austria further explained that his artistic philosophy is based on “naturalism.” He said he looks at “creation” as “a paradigm of God.”

Perhaps Filipino modern folk artists can best be likened to the Mexican moderns since both nations share a history of pre-conquest primitivism, Western Catholicism, colonialism and a troubled post-colonial present.

In “Idols Behind Altars,” Anita Brenner writes of the Mexican artists, “The need to live, creating with materials; the need to set in spiritual order, the physical world; the sense of fitness—these are components of an artist’s passion, and these are the Mexican integrity.” The same can be said of Tam P. Austria and the integrity of his art.