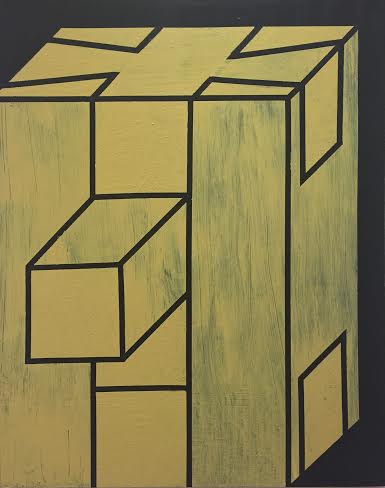 ART can never be imagined without grappling with the plasticity of the material world.

This sets the parameters and possibilities of what an artwork can or can’t be. It either limits the artist or sets him soaring to the sky.

This is precisely what Allan Cosio deals with as an artist: What artwork can I do with this material? And at times the tables are turned: To what extent can this material’s plasticity bring to fruition this image in his head?

Ongoing at Archivo 1984 is a glimpse of Cosio’s struggles and journey focusing on the decade when he won the Pollock-Krasner grant and the grand prize for Sculpture in the Art Association of the Philippines competition.

His early kinship with theater, where he met his equally gifted wife Ivi, has definitely shaped and contributed to the kind of artist he is today. Starting out as an actor and graduating to set designer, this became that little push that led him to the path of the visual arts, eventually being awarded the Chevalier de L’ordre des Arts et des Lettres from the French government.

It was a stroke of genius for the gallery to mount this exhibition focusing on one of the most significant decades of Cosio, which coincidentally happens to be the founding decade of the gallery. The focus is mostly on Cosio’s two-dimensional works in nontraditional materials.

In the loft area of the galley there is a series of works of lacquer on pellon. For those who are too young to remember pellon, it is a thin pliable synthetic material used to insert in collars to make them stand upright. Because of the fiber, there’s some form of build in texture on the material itself.

His ode to the nuclear era, “No Nukes” (1984) is a beautiful 4’ x 6’ work (hard to call them paintings because the pellon acts as the brush) in which he painted the pellon in vivid primary colors with touches of green and black, made cutout shapes, and proceeded to make a composition from them. The result was dynamic, vehement and explosive.

In another series, “Transparence,” also on pellon, he was experimenting with the idea of overlapping patterns. Three big dominant squares, two orange and one blue in different angles on a black background, is overlapped by a pattern of miniature white squares. The dominant squares are spritely; the overlapping white squares make it more animated. It’s beguiling, deceptive, irresistible.

This writer’s favorite piece would have to be “Joint.” It is a painting of an oblique view of a sculpture he did, which is now with CCP. With just yellow and black paint, he recreated in a two-dimensional painting a three-dimensional piece of work.

The actual sculpture “Tuwangan,” is a massive opus of intersecting wood pieces that look very much like a 3D puzzle. The notches and the angles make the intersections trickier than it looks.

In the collector’s gallery, Cosio’s foray into portraiture comes to life. Using black felt paper as support, the artist uses pastel to create a variety of human forms and a lot of movements. Overlapping, repetitive, and in flux, his subjects are all in transition from one stance to the next.

So whether it be fiber, bamboo, plastic, synthetic or natural, this artist does not back out from challenging himself. He will find a way to create art that will make the world take notice and realize that there is nothing that will limit the creative mind, in this case, Cosio’s mind.