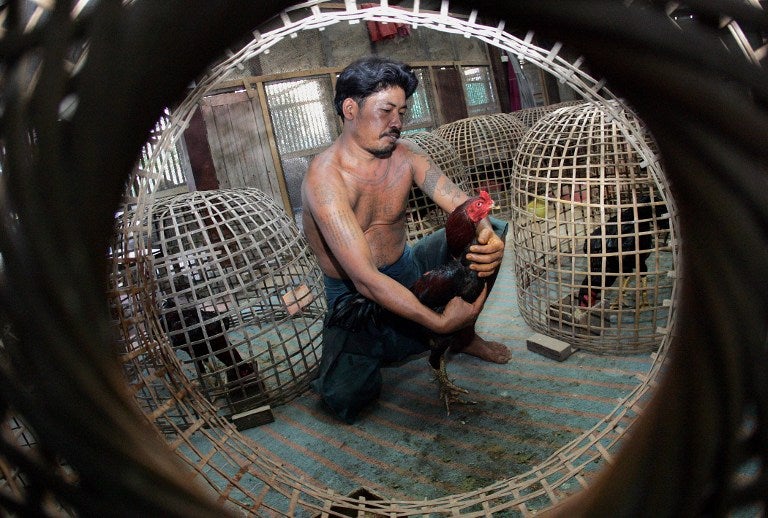 A Thai worker selects a cock for a fight at a breeding farm in the outskirts of Bangkok. AFP FILE PHOTO

BANGKOK — The cry of roosters drowns out the roar of engines beneath a Bangkok flyover as all eyes are trained on two sparring birds, a bloody, high stakes battle in a country where cockfighting is big business.

The birds do not usually fight to the death, as in many parts of the world, but they can still inflict fatal damage to their opponents in contests almost always accompanied by lucrative gambling.

For the few dozen men surrounding a technically illegal but tolerated underpass ring, cockfighting is as much a generations-old Thai tradition as it is commerce.

“Probably it’s genetic as my parents like cockfighting too,” a 42-year-old electrician from northeast Loei province told AFP as he cradled his battered but still-standing “Little Red” at half-time.

Like most of the working-class men priming their roosters, the pony-tailed and tattooed man — who withheld his name — began cockfighting in his rural birthplace before bringing the hobby to the heart of the Thai capital where he now lives.

While they risk up to two years in jail for gambling at an unregistered ring, authorities routinely turn a blind eye to such activities. Thailand is dotted with much larger, official cockfighting stadiums that draw vast, big-spending crowds.

At the Bangkok Cockpit in Samut Prakan, a province on the outskirts of the capital, a 1,000-strong throng cheers on a pair of avian fighters whose necks are locked in combat as bets furiously exchange hands.

“We don’t think it’s violence as it’s a kind of sport,” said regular punter Suwan Cheunchom, 35, after winning 500 baht on a round which ended in a tie.

His prize is on the lower end of a betting spectrum in a nation where most forms of gambling are outlawed.

In this lucrative industry “good fighting birds” can sell for more than $85,000, he added, with Thailand exporting cocks to neighbouring countries such as Malaysia and Indonesia and buyers arriving from as far afield as France and Bahrain.

Unlike in the Philippines, where roosters can be seen fighting with blades attached to their feet, Thailand’s birds usually compete with their spurs wrapped in fabric.

The cocks are judged on their fighting prowess rather than their ability to kill, with proponents like Banjerd arguing such protections mean “there are not many injuries”.

“It’s a way to preserve ancient Thai culture and pass it on to our children,” said the 50-year-old.

But some Thais are fighting for an end to the practice in a country where the concept of animal welfare is only slowly emerging.

“It’s torture, from any point of view. But the people who get involved claim that it’s the nature of the animal to fight,” said Roger Lohanan, founder of Thai Animal Guardians Association.

The legislation bans “torture and cruelty towards animals” but exempts activities deemed part of the country’s traditions such as bull and cock fighting.

Roger says profit-mongers are “exploiting culture” to make money at a time when most Thais agree cockfighting is outdated.

“There are a lot of influential people behind cockfighting,” he says, who benefit though the gambling as well as the industry that has risen around it from the hormones used to plump the birds to the wicker baskets they are reared in.

The official view supports cockfighting as an intrinsic part of Thai culture.

“We’ve had cockfighting since ancient times, for more than 700 years,” said Pitsanu Prapatananun from Thailand’s interior ministry, which encourages raising the birds in local communities as a form of “extra income”.

Back at the underground ring, men suck out blood pooled in the necks of their fowls in between bouts — a sign, the Loei electrician says, that shows how much they all care for birds they have painstakingly raised.

“We suck out the blood from the neck so it feels refreshed and better,” he said.

“The longer he can fight the stronger and more valuable he will be.”