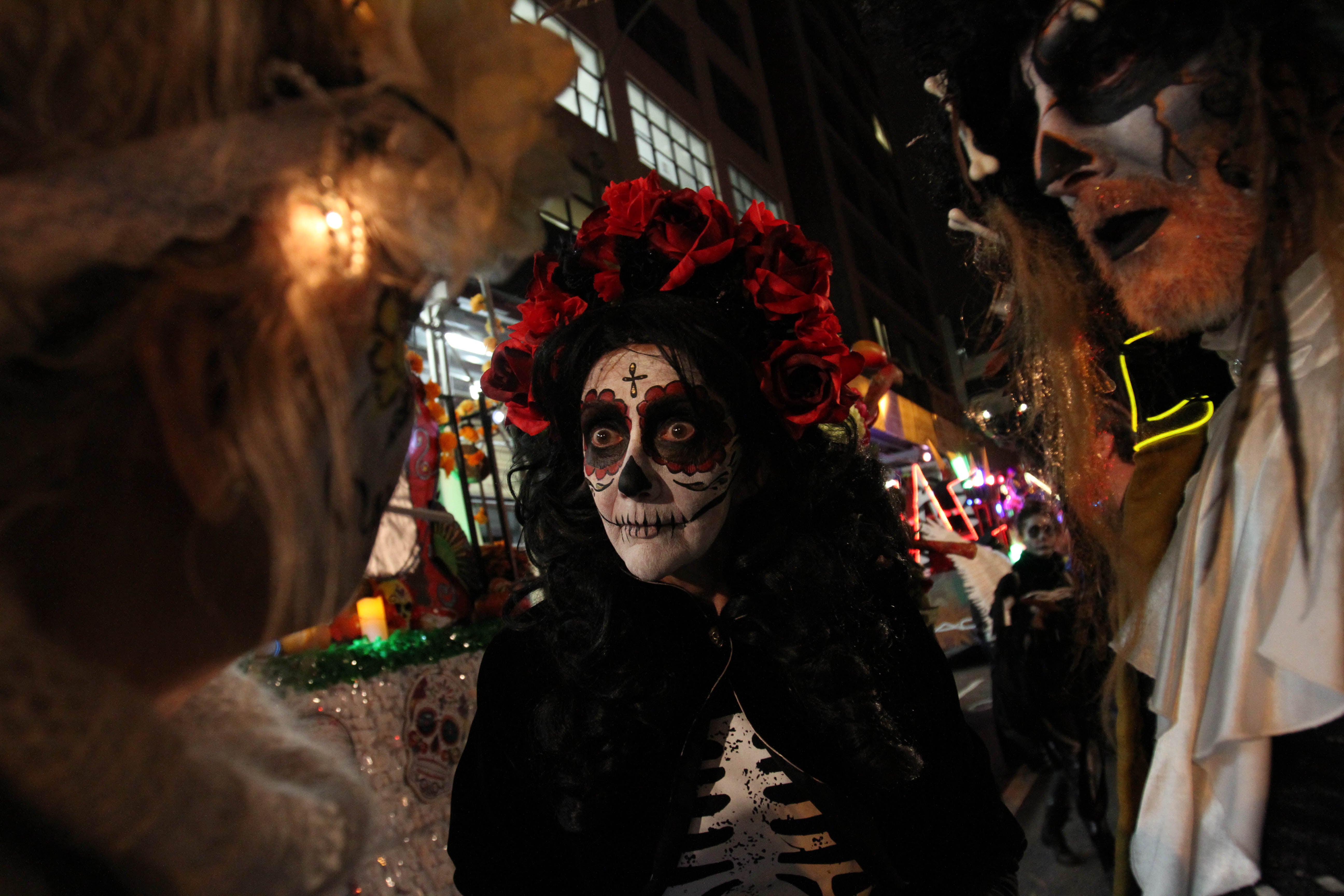 Sharon Hagale, center, waits with others for the start of the Greenwich Village Halloween Parade, Saturday Oct. 31, 2015, in New York. (AP Photo/Tina Fineberg)

NEW YORK — New York City’s giant Halloween Parade brought thousands to the streets Saturday to celebrate the ghoulish and spooky — from Donald Trump to witches; from bacon to a pervert in training.

Organized on balmy autumnal night, it was the 42nd edition of a parade that marches up Sixth Avenue, and calls itself the largest celebration of its kind in the world.

Keeping it political, there were party goers dressed as Donald Trumps, the brash Republican contender for president, and a Hillary Clinton witch-puppet on a broomstick.

Keeping it sporting, revelers donned Mets hats or shirts in honor of the once-moribund New York team’s place in the World Series, 30 years after it last clinched victory.

Rashers of bacon and posters proclaiming love for pork were also popular — just days after the United Nations warned the cured meats give you cancer.

But as befits the entertainment capital of the United States, it was above all a bonanza of pure creativity, style and sexual outrageousness.

“It’s our Mardi Gras,” said Catherine Schuller, an image consultant who teaches fashion and is friends with the organizers. “It’s the ultimate creative expression, and this is what we do best.”

Pediatrician Alon Leibovitz, 38, was one of those dressed as Trump, loathed by a swathe of Democratic New York for his bombastic style and opinions on immigration.

He strapped a giant plaster-cast penis to his crotch with the strapline “Obama You’re Fired” — Trump’s catchphrase as a reality TV star on “The Apprentice.”

“It’s so funny and the energy, you get together with your friends. You can be kids together,” he said.

Graphic designer Mimi Flow said her bodysuit spider costume, which she made herself complete with elaborate web headpiece, was inspired by a vintage photo she found online from the 1920s.

A student, who gave his name as Richard Jones, came as a flasher in a black raincoat which he flung open to reveal a flashlight and Christmas-tree lights strapped to and flashing from his briefs.

“It’s all about engaging people,” he said leerily.

A New Jersey couple came as a pair of New York cops, wondering whether people might think they were real officers.

“We don’t have the guns with us,” explained chemical engineer Kaushal Sheth, explaining that no one had.

Husband and husband — both called Chris Jordan — dressed up as street fighters for their first parade since moving to New York from Colorado, and getting married.

“It’s huge, it’s awesome,” said one of the Chrises, who works as a consultant.

“There are so many people. Everyone’s so excited. And everyone’s wearing costumes in the subway and no one cares.”

Your guide to the top Halloween gigs for your kids