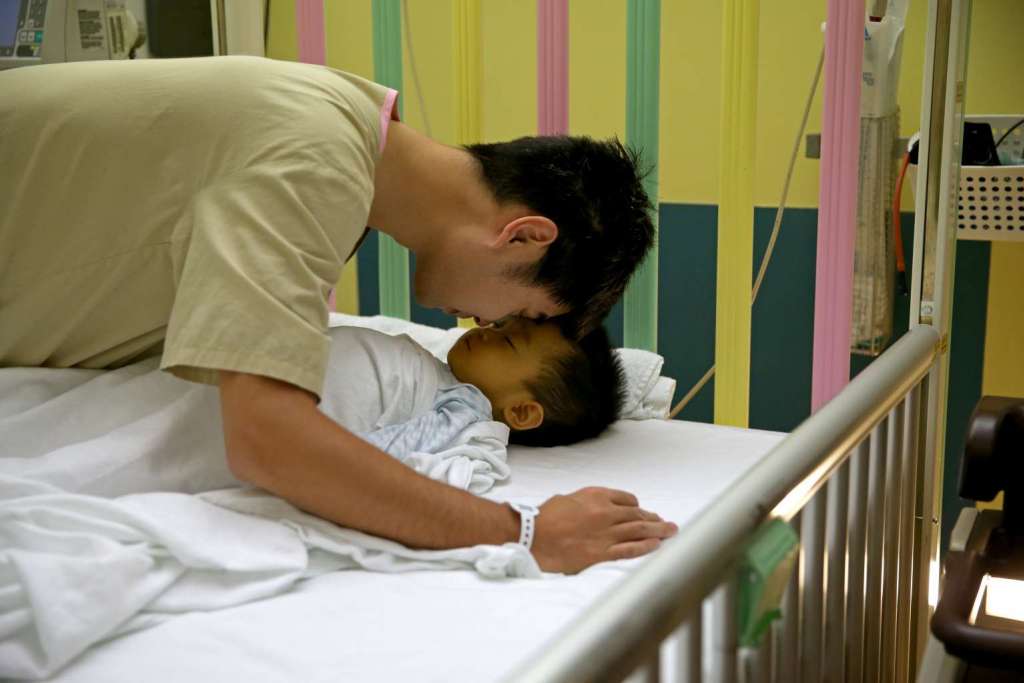 Mr Guo spending a quiet moment with Jeremy at 6am on Aug 1, just before both of them go into the operating theatre for the liver transplant operation. Fortunately, Mr Guo was found to be a suitable donor for his son.ST PHOTO: WANG HUI FEN

They move in synchrony like a finely tuned orchestra, but deliver with laser precision.

A team of over 50 surgeons, specialists, nurses and medical personnel from 13 different departments and divisions at the National University Hospital (NUH) worked tirelessly to transplant part of a father’s liver into his 22-month-old son, and to care for him in the months before and after the mammoth surgery on August 1.

The patient, Jeremy Guo, is now up and about, and doing well.

“This is his first real birthday celebration,” the boy’s overjoyed mother, Ms. Maggie Yu, said on Sept. 29, the day her only child turned two.

During a visit by The Straits Times to the family’s four-room flat in Tiong Bahru that day, he unwrapped presents and blew out candles with glee and couldn’t wait to pick out all the strawberries and blueberries on his chiffon cake – Yu’s first attempt at baking.

Said proud father Guo Yang, 34, who was already back to work as a project engineer: “Everyone has done all they can; the rest is up to him.”

Jeremy was born with biliary atresia, a condition where the bile ducts, which carry bile from the liver to the gall bladder, are absent, and bile becomes trapped, building up and damaging the liver.

His parents noticed something was wrong when the jaundice he had as a newborn did not go away – blood tests and other investigations confirmed the diagnosis.

When he was just two months old, he had a bile drainage procedure to relieve the obstruction, but it didn’t work. Jeremy was living on borrowed time. The only option was a liver transplant.

“His liver condition got worse, his tummy grew bigger and bigger due to the build-up of fluids, and when he coughed, it could trigger bleeding and a trip to the intensive care unit,” said Yu, 33, a trading assistant.

“When I found out that he needed a liver transplant, I cried and cried.”

Luckily, Jeremy’s father turned out to be a suitable donor.

But it was months before the boy was strong enough to undergo the major operation, and during that time, NUH became the family’s second home, said Yu, a Singapore permanent resident who is originally from Hubei, China.

“The moment he had a high fever, we had to go to hospital. During these months, I had spent half my time in hospital,” she said.

“He had so many injections that he became very afraid of needles, but he also became very fond of the nurses, calling them jie jie (Mandarin for big sister).”

Eventually, the transplant was scheduled for Aug. 1.

Well before dawn, Jeremy’s parents and relatives were up and waiting. And Mr. Guo spent some private time with his sleeping son before going in for surgery himself.

“I wasn’t afraid. I was confident everything would go well,” he said.

And just after 7 a.m., goodbyes were said and some tears were shed as Jeremy was wheeled into the operating theater.

During Jeremy’s 12-hour procedure, the maestro and general, no doubt, was pediatric liver transplant pioneer K. Prabhakaran, who not only performed key parts of the surgery, but directed the entire procedure late into the night.

The operation was complicated by Jeremy’s earlier surgery, which had caused some scarring as well as adhesion between the liver, and abdomen and intestines.

“This was one of the more difficult cases, and we spent a lot of our time trying to free the organs, and avoid abnormal blood vessels,” said Professor Prabhakaran, director of the hospital’s Pediatric Organ Transplant Program.

The most complex part – removing the diseased liver – took over eight hours and during that time, no one left till the job was finished.

Surgeons were rooted to the spot, and the nurse in charge of handing out equipment, needles and sutures to them did so at lightning speed, with no hesitation.

Another crucial member of the group was Dr. Terry Pan, a consultant from the hospital’s Department of Anesthesia, who monitored blood oxygenation, electrolytes, urine output and clotting, among others, while making sure Jeremy was comfortable and in no pain.

“This is a multi-disciplinary approach, involving everyone from anesthetists to the pediatric intensive care unit, those in reconstructive microsurgery and diagnostic imaging to nutritionists who build up the patient before surgery,” he said.

“It’s really a team effort, and the younger the patient, the more challenging it can be.”

Meanwhile, the National University Center for Organ Transplantation team in the adjoining room was raring to go, but had to wait patiently for the delicate organ removal process to be finished.

When the liver was finally out, it was a rush to remove a portion of Guo’s liver, reattach it to his son, and make sure the new liver worked by testing for blood flow and if it was producing bile.

“It is important to synchronize both procedures so the liver is out of the donor and into the patient in as short a time as possible,” explained Prof. Prabhakaran, who is also the head and senior consultant at NUH’s Department of Pediatric Surgery. “With a liver transplant, you’re usually fine if you cross the first week.”

Despite working on an emergency case into the wee hours of the morning that day, Prof. Prabhakaran stayed till the last stitch was in place. “If I do not stay till the end, I’ll just go home and dream about it, so I may as well stay,” he said with a shrug.

So he was also able to reassure Yu, who had spent the exhausting hours waiting for news of her son and husband, together with her mother-in-law Yang Keqin, 60, a retired accountant.

“My mind was a blank, I couldn’t eat, I couldn’t sleep. It was the longest day of my life,” she said, adding that family support had kept her going through the difficult months.

Jeremy was soon on the mend, and returned home nearly a month later.

Now, he has a healthy glow and has lost the yellow tint in his skin and eyes, which was a telltale sign of the poisons in his bloodstream.

Said Guo: “He recovered faster than me. After a few days, he was already rolling around in bed.”

An avid runner who skipped The Straits Times Run at the Hub this year because of the operation, Guo still proudly sported the event’s T-shirt during the interview after getting a friend to run on his behalf. “I’m back to normal now. I ran last year and I plan to run again next year,” he said.

Asked jokingly by his wife what birthday present he had prepared for his son, he replied with a smile: “It’s already inside.”