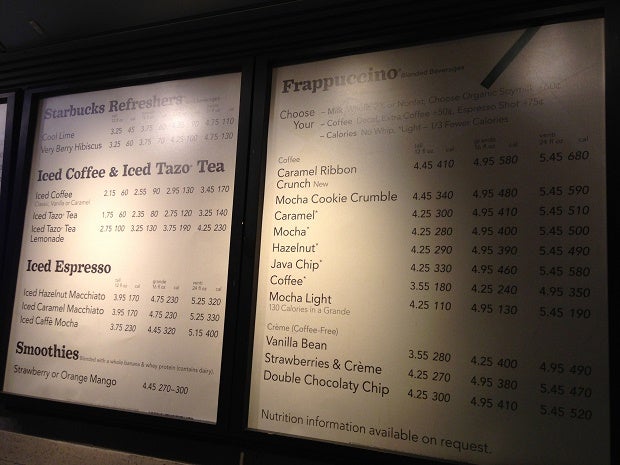 In this June 17, 2013 file photo, a menu board showing calorie counts hangs at a Starbucks in New York. Tracking calories at chain restaurants is supposed to become easier next year, but new studies raise questions about whether the counts actually make a difference for diners and eateries. AP File Photo

WASHINGTON, United States—Tracking calories at chain restaurants in the U.S. is supposed to become easier next year, but new studies raise questions about whether the counts actually make a difference for diners and eateries.

New York University researchers used receipts and surveys at McDonald’s, Burger King, KFC and Wendy’s to track customer purchases. In New York City where menus were labeled, calories averaged between 804 and 839 per meal, essentially the same as the 802 to 857 calories at fast-food locations in New Jersey that didn’t post calorie content.

Beginning in December 2016, chain restaurants and certain other retailers that sell prepared food will have to list calorie content on their menus.

As to whether consumers will take notice, researchers reported Monday that just over a third of customers noticed calorie counts on the chains’ menus last year, compared with about half when the law took effect in 2008, and 9 percent claimed to use them to order fewer calories.

There may be greater effect at different kinds of restaurants, cautioned associate professor Brian Elbel of NYU Langone Medical Center.

A second study, also in the journal Health Affairs, raises the possibility that menu labeling might have more of an effect on what restaurants offer than on customer ordering habits.

Researchers at Johns Hopkins University used a database that collects calorie content from 66 large U.S. chains to compare menus from restaurants that voluntarily list calorie counts in all their locations around the country—McDonalds, Chick-Fil-A, Panera Bread, Starbucks and Jamba Juice—with the rest.

While these restaurants do boast calorie-packed products, “there are more healthier options on those menus” that bring down the per-item average, said study co-author Julia Wolfson, a fellow at Hopkins Bloomberg School of Public Health.

She couldn’t tell whether those chains had more lower-calorie items all along or introduced them ahead of menu labeling. But new items they introduced in 2014 had nearly 110 fewer calories on average than competitors’ new menu items, she said.

Calorie counts aside, a third study shows parents will order healthier kids’ options. Tufts University researchers examined purchases at 13 Silver Diner locations after the regional chain changed its kids menu in 2012, adding healthier entrees and sides and removing fries and soda, which could be substituted upon request.

More than half of kids’ orders contained fries before the menu change. That dropped to 21 percent over the past year, while nearly two-thirds instead came with strawberries.