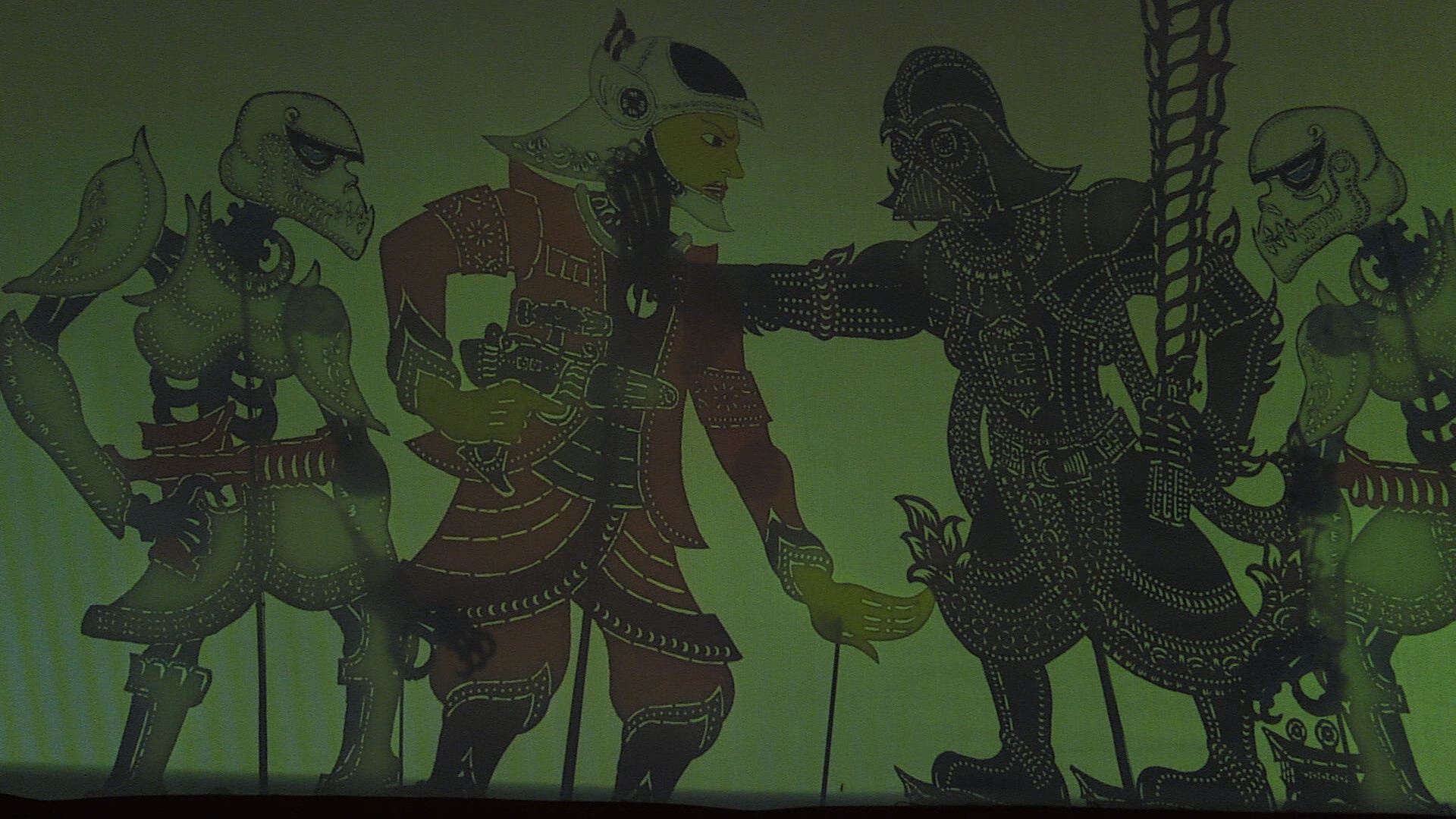 Darth Vader’s distinctive helmet-headed silhouette swoops in to seize control of a spaceship, but this is not the movies — instead his movements are being brought to life by a Malaysian shadow-puppet master behind a back-lit screen.

Darth Vader’s distinctive helmet-headed silhouette swoops in to seize control of a spaceship, but this is not the movies — instead his movements are being brought to life by a Malaysian shadow-puppet master behind a back-lit screen.

“Tell me, where are the plans that have been intercepted?” the puppeteer intones in the Malay language, drawing cheers from hundreds of spectators as they recognize Vader’s baritone.

Traditional Indonesian and Malaysian shadow puppetry was once at the center of Southeast Asian art and culture, but has steadily lost its appeal.

But three Malaysians hope to breathe new life into the art by updating it with Star Wars and other pop-culture themes.

Leading the effort is Chuo Yuan Ping, a designer and Star Wars buff who first crafted shadow puppets based on the movie for an art exhibit a few years ago.

His research for the project uncovered concerns about the state of the art, which is known as wayang kulit.

“At first it was all about Stars Wars, but later I learnt how wayang kulit was a dying art form after speaking to many master puppeteers, and I felt sad,” said Chuo, 43.

“All of us felt a responsibility to do more for this part of Malaysian culture.”

Chuo, art director friend Teh Take Huat, and 63-year-old master puppeteer Muhammad Dain Othman have performed a section of the original 1977 Star Wars film as a shadow-play about a dozen times the past two years.

Star Wars was chosen as the theme due to its near-universal appeal, as evidenced by the frenzy surrounding the December release of the latest big-screen instalment, “Stars Wars: The Force Awakens.”

Traditionally based on Hindu epics, shadow puppetry was introduced to the region in the 15th century and promoted by Java’s Hindu rulers.

It seeped throughout Indonesia, Malaysia and elsewhere as Muslim preachers used it as a way to spread Islam, the region’s dominant religion today.

Puppeteers use sticks to orchestrate the movements of elaborately decorated leather puppets on a back-lit cotton screen, and voice the characters, backed by a traditional gamelan percussion orchestra.

Wayang kulit is on UNESCO’s list of “masterpiece” human art forms, but radio, TV, and now digital entertainment increasingly relegate the genre to tourist consumption or the odd cultural show.

Rising Islamism also has led to restrictions on the art in conservative areas of Malaysia, due to its Hindu themes.

At a recent performance in a Kuala Lumpur square, a miked-up, sarong-wearing Muhammad Dain worked his puppets while sitting cross-legged behind the screen.

Behind him, a young sound engineer used a laptop to make the puppeteer’s voice more Vader-like, to replicate R2-D2’s digital-beep mutterings, and to splash the screen with colorful lighting effects.

“We see the audience happy and their perceptions about wayang kulit are changing, that it has legs,” said Chuo, who adds that team has invested more than $10,000 of their own money.

Mohammad Sani Sukir, who brought his family to watch the show, raved afterward.

“By combining two things, one old and one new, into one package, this increases the attraction of wayang kulit,” he said.

But it originally took some persuading to convince Muhammad Dain, who runs a wayang kulit art gallery in his hometown in rural northern Malaysian state of Kelantan.

Chuo felt a puppet master was needed to ensure the art form’s integrity and aesthetics.

“After months of talking, convincing and using a bit of The Force, he agreed to join and do this,” Chuo says with a laugh.

“I had to pass him my Star Wars DVD and let him know who Han Solo was.”

Most of the puppets were made from tanned buffalo hide by skilled Kelantan craftsmen.

Government efforts to promote appreciation of wayang kulit have gained little traction, but private groups are forging ahead, said Eddin Khoo, founder of a cultural non-profit that stages performances of the art.

He called the Star Wars project “helpful” for wayang kulit.

Chuo has expanded the idea by designing Superman, Batman and other superhero shadow puppets for exhibitions, and may incorporate them in future shows.

“It’s a little thing that I can do for Malaysian culture,” he said.