What you didn’t know about the ‘terno’–and no, it wasn’t Ramon Valera who invented it | Inquirer Lifestyle ❮ ❯ 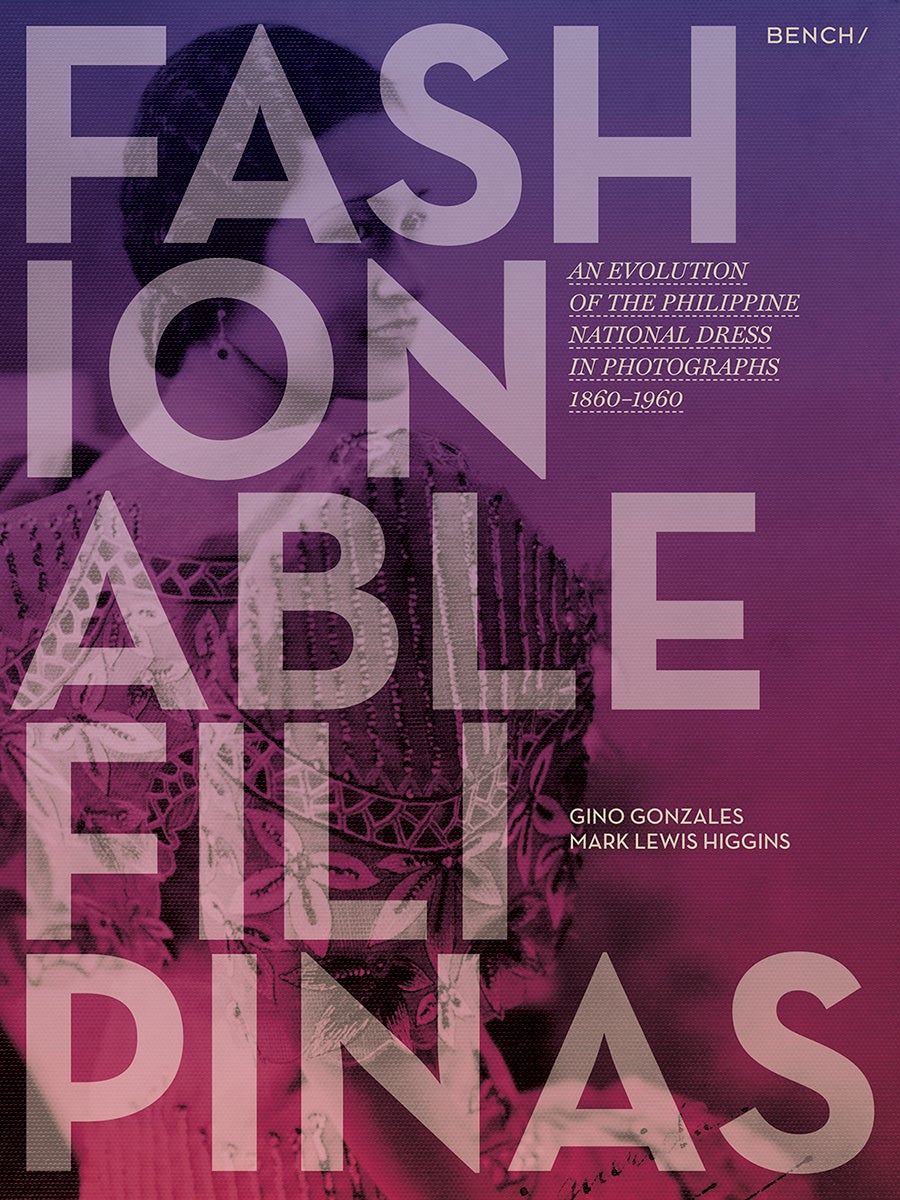 The book cover. Efren Prieto is the book designer. (Photos reprinted from the book with permission from the authors and publisher)

What you didn’t know about the ‘terno’–and no, it wasn’t Ramon Valera who invented it

It was 2003 and, for the first time since the Marcos era, the spotlight was on the terno.

The Metropolitan Museum of Manila was holding a terno exhibit and a terno ball, with a fashion show of contemporary terno designs. There was also a nationwide terno design competition.

Gino Gonzales, fresh from New York University, was beginning to make a name for himself as scenographer, and exhibition and costume designer. He was in charge of exhibit design and curating the pieces, including the collection of eminent designer Joe Salazar.

Twelve years hence, Gonzales says he was dismayed at the turnout of the young designers’ competition.

“I thought a lot of them missed the point,” he says. “They didn’t get it. They didn’t know the history behind it. How could these guys stylize the terno without knowing what it’s about? A lot of people will be angry at me for saying this, but they really didn’t.”

On Nov. 10, Gonzales and Mark Lewis Higgins will launch their book “Fashionable Filipinas: An Evolution of the Philippine National Dress in Photographs, 1860-1960.”

It’s a photographic resource book that seeks to educate both young fashion students and foreign readers—and everyone in between—on the history of the terno, and how it evolved into what it is today.

Fashion retailer Bench is the publisher.

Trite as the title might sound (and deliberately so, by the way), it serves as a valuable educational reference that clinically dissects the transformations and variations of the national dress throughout a century, starting when studio photography started to thrive in the Philippines (1860) until the pre-Marcos years (1960).

The idea started with Gonzales merely wanting to preserve the photographic sources of Philippine costumes—postcards—which were fast deteriorating and disappearing. He only wanted to make a small picture book that was easy to carry around.

“He asked me and my sister Sandy for photos of the 1940s to 50s from our archives [for the planned book], and I foolishly said I’d help,” says Higgins, the son of the postwar designer Salvacion Lim Higgins and a co-director of the fashion school Slim’s.

That was two years ago. What started as a small-budget picture book grew into a 200-page, magazine-size tome.

When they presented it to Ben Chan, Bench founder and chair of Suyen Corp., he loved what he saw and asked them to add another 100 pages, resulting in a hardbound coffee-table book complete with a slipcase.

“Gino is more the expert on the subject, though neither of us has a background in history or even writing,” says Higgins, who’s a visual artist and fashion educator.

“That’s why we also say it’s ‘an evolution,’ not ‘the,’ because we’re not making any ultimate statement. What this book is about is really a thesis—how we think the terno evolved.”

Even with his own students, Higgins says, he’s noticed that they do the terno’s butterfly sleeves so well—a prerequisite for graduation—“but they always close it, they make it into a jacket. They don’t know how long it took to get that neckline, the struggle to remove the pañuelo, to arrive at that point. When the terno ceased to be worn around the end of the Marcos period, there was this gap in history where all these young people growing up in that period didn’t have an idea what the terno is.”

The authors soon realized the monumental task ahead, discovering there were very few scholarly sources in existence.

But they found two that were specially useful: an unpublished thesis by a certain Paz Meliton y de Mingo, who wrote it for her master’s degree at the University of Santo Tomas in 1949 (found at Lopez Museum), and four volumes of “The Terno” magazine (found at the Ateneo).

Meliton’s thesis, “A History of Philippine Costumes,” was also the basis of National Artist Salvador Bernal’s “Patterns for the Filipino Dress: From the Traje de Mestiza to the Terno, 1890s-1960s.”

The search for photographs led them all over, including cold-calling museums and individual sources.

They found what they needed from the Lilly Library in Indiana University, the US Library of Congress, three museums in Spain, a museum in the Netherlands, Getty Images, and London’s Victoria & Albert Museum, as well as individual collectors.

They were careful to avoid “landmines,” like using too many materials from certain families, or even from the Slim’s archive. Though who they were played a role in the clothes they wore, specific individuals weren’t the story, say the authors, such that the identities of the women in the photos are only identified in the index.

The book is, they stress, by no means a social registry.

“We wanted to make a resource book that’s still fashion, and artistically appealing, almost like a textbook, but not too much text because kids won’t read it,” Higgins says. “Bench was on top of our list because it has that connection with pop culture. It also has a roster of endorsers that could popularize the terno again.”

At the launch at the Peninsula Manila, Slim’s students will dress Bench’s celebrity endorsers in terno. The book will be sold at Bench stores.

A more affordable soft-bound version will also be available. Bench is donating copies to municipal libraries.

In their research, the authors found startling details about the terno that they believe are vital knowledge for today’s fashion students and designers.

“We want to correct some misconceptions, including the idea that Ramon Valera invented the terno; he did not,” Gonzales says.

“No one person invented it. It was a collective effort. The removal of the pañuelo, which is usually attributed to Valera, happened way, way before [he removed it]. Women have been trying to remove it way before.”

They found photos of four women in 1910 without pañuelo; Valera began designing in the 1930s. “There was so much rage for daring to remove it, and those women got flak for doing so,” Gonzales adds.

The book also has three glossaries of terminologies: one on textiles, another on jewelry and a general one. They aim to clarify the meaning of the word “terno,” “because it kept changing throughout the decades,” says Higgins.

“Terno literally means a matching set, but when you look at the terno today, it’s illogical. In the 1920s it referred to a matching set of camisa, pañuelo and saya. Before that, they didn’t match.

“Terno was a reference word that they used if they wanted it to match—the design, burda, etc. were all matching. It didn’t refer to a single dress until about the 1940s.”

For each decade, the photos have detailed outlines of how the national dress was evolving, from the folds of the pañuelo to the volume of the saya, even the women’s current hairstyle. There’s also a pullout illustrative timeline of how the terno evolved vis-à-vis the western dress.

“We’re the only country in Southeast Asia whose national dress evolved directly from the couture houses of Paris. It’s a plus, not a minus,” adds Higgins.

“We made it our own. The sleeve is our own, it’s a hybrid sleeve.”

As a fashion observer, Gonzales could name only a handful of designers whom he thinks know their terno history, based on the clothes they make for the annual State of the Nation Address (Sona).

He cites the work of designer Pepito Albert: “You see that it’s very stylized, very architectural, but there’s a back story there that’s not necessarily in your face. You know he studied it. There’s just a hint of pañuelo, but you know that it is one. Even when he does a drape here, you know that he’s stylizing a tapis.”

“What Gino is saying is that you know if somebody knows what they’re doing and they know their reference, versus someone who’s groping in the dark, simply stylizing something they don’t know about,” Higgins adds.

“It’s all subtraction,” says Gonzales. “But these informed designers are able to quote from the past… They know the codes; they’re toying with it and turning it into something else. Some young designers are merely imposing sleeves on a western dress. The most horrifying part for me—and this is just my opinion—is that there’s a need for these designers to reinvent the sleeves, which is so unnecessary!”

Higgins believes the terno’s butterfly sleeve has reached its height of evolution.

“Rather than reinvent the sleeve, go back and look at what else you can reinvent. It’s fine to make it a bare midriff, or wear it with shorts, but the sleeves have to stay and not shrink any further.”

The authors seek to remind Filipinos that the size of the terno sleeve had political connotations. Its imposing volume was a marker of the Filipina’s emancipation and right to college education.

In the immediate years after 1908, when women started getting their college diplomas, it was essentially the power suit, much like the shoulder pads of the 1980s. Now, say the authors, some designers are collapsing the sleeves, like tiny little-girl dresses.

“Why make it small when it’s the symbol of nationalism? It’s like you don’t want to be noticed,” says Higgins. “Fashion isn’t trivial, it’s an artifact that tells you a lot about a country.”

What the duo is saying is that, there’s nothing wrong with the terno being worn at the Sona; people just need to know the etiquette of wearing the national dress because—surprise!—there are different types of terno appropriate for each occasion.

“People should wear the terno to the Sona, just not those terno,” Higgins says. “It’s not the terno, but the kind of terno. As it is, it looks like Oscar night.”