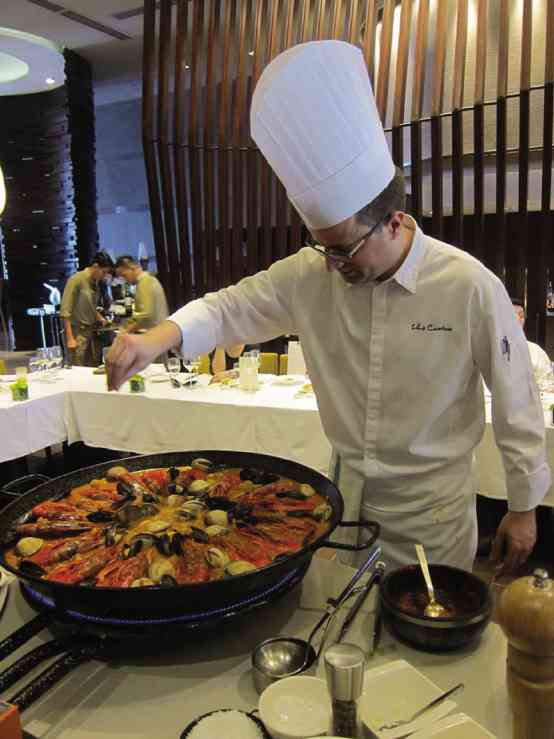 The invitation to lunch recently at Cucina, the all-day dining restaurant on the 24th floor of Marco Polo Ortigas, was to sample “the best paella in town” as prepared by executive chef Lluis Cantons Pessarodona.

Instead of presenting a pre-cooked pan of paella, the Basque chef prepared the dish from scratch.

“Around 90 percent of this paella recipe is from my father while the remaining 10 percent is my own technique,” Lluis said as he began cooking some of the ingredients, including huge prawns imported from Spain, chopped chicken and sliced sausage. He then flavored the dish with sofrito, a chunky sauce widely used in Spanish and Portuguese cuisine made of garlic, onion, paprika, peppers and tomatoes cooked in olive oil.

While the paella was cooking, two types of appetizers, a broad bean soup with kilawin, and Piquillo peppers stuffed with bacalao (codfish), were served. The items—a mix of traditional and fusion cuisine—were different from what one normally expects at a Spanish-themed lunch.

The first appetizer consisted of a slice of rustic country bread, half a tomato and paper-thin slices of Iberico ham. The chef then instructed us to rub the tomato on the bread, top with the ham, and enjoy. The combination of sweet and tart tomato and salty ham was simple but satisfying.

Apparently this tapas is the chef’s favorite dish, which he’s willing to eat every day for a whole year: “It’s simply the best yet easy to do.”

Lluis then showed off his playful side in the next two dishes: seafood cooked escabeche-style, and a soup that was sour and creamy at the same time.

“In the past,” he said, “when refrigerators had not been invented, fresh seafood was cooked escabeche since the vinegar and the olive oil acted as a preservative. The method also broke down the strong flavors and aromas of certain seafood like bluefish, mackerel and sardines. That’s why escabeche is best eaten the day after it is cooked.”

Instead of tossing the bones after filleting sardines, Lluis set them aside, made sure they were properly cleaned and quickly fried them. A sardine bone was then propped on each plate and served to guests. The result was a crisp, edible fish bone one could eat whole.

For the soup, the chef creamed broad beans and poured the resulting soup over sliced ceviche on top of caramelized onions. The sourness of the kilawin was bracing but was tempered by the soup’s creaminess.

With the paella finally ready, we tucked into plates of perfectly cooked rice, meat and seafood flavored with sofrito.

“My cooking style is based on things I learned in the past as I stay true to the food’s original flavors,” said Lluis. “I am more inclined to Mediterranean dishes with some Asian touches, using only the top quality products. Cooking is not about what the chef wants but what the market looks for.”

1) To create the fish stock, place the fish bone and trimmings, mixed celery, carrot, onions, white wine, peppercorn, 8 pieces of bay leaves and 10 liters of water in a pan. Bring it to a boil and let it simmer. Skim often and strain after 30 minutes.

2) To create the sofrito base, first preheat a pan with olive oil. Add 30 g of garlic to the pan and fry until golden brown. Add 500 g of chopped onions, 500 g of green bell pepper, 500 g of red bell pepper and 1 unit of bay leaves to the pan and stir continuously with heavy fire until poached. Add the fresh grated tomato and let it simmer for 2-3 hours. Sofrito is used as the base of many paellas to give the final product a strong flavor and texture.

3) To create the picada, mix the toasted hazelnuts, toasted almonds, 20 g of fried garlic, fried parsley, bruschetta bread toast and 500 g of water into a food processor and blend until it becomes a smooth paste. Add more water if necessary.

4) To make the paella, take a paella pan and add 15 g of chopped garlic followed by the squid, sofrito and paella rice. Stir until the rice sparks.

5) Add the fish stock and stir until the rice is equally spread in the pan.

6) When it starts to boil, add the prawns, clams, black mussels and picada.

7) Season with the saffron and bay leaves and let it simmer for 20 minutes.