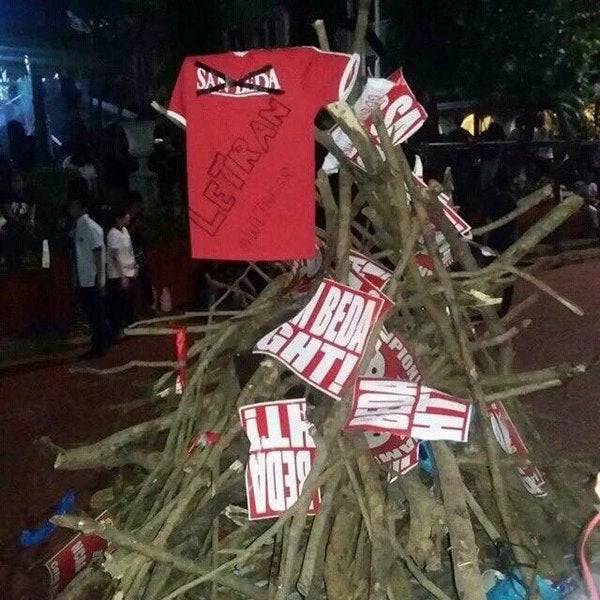 MORE than a tradition, the bonfire has been a symbol of athletic triumph in collegiate basketball. But a recent bonfire celebration was criticized for what many believed was a show of disrespect.

Many people on social media, however, were dismayed after seeing photos of San Beda shirts, banners and posters allegedly burned during the bonfire at the Letran campus.

We asked students of UAAP schools about what they thought of such post-championship goings-on like the bonfire. Their thoughts:

“Surely, there is someone responsible for what happened. I found it very disrespectful and unethical. It was also clearly offensive and showed no respect for San Beda. The act didn’t go well with the real essence of the celebration, which was to highlight the team’s sacrifices and hard work. But let us not judge the entire Letran community…”— Jefferson Yarra, Far Eastern University

“What they did showed a lack of camaraderie between the two schools. I believe that what they did was just too much.”— CJ Tan, Ateneo de Manila University

“I was offended by their actions because what they did showed that they have no sportsmanship. Even though they won, they should have shown their respect for San Beda. The way they acted was a total show of disrespect and immaturity.”— Mary Grace Esmaya, University of Santo Tomas

“I think some people went too far with the bashing. Their emotions should have stayed on the court. It’s just a game.”— Philip Matel, University of Santo Tomas

“Any form of discrimination should not be tolerated. But for an all-Filipino Letran team to beat a champion team like San Beda, I’m pretty sure emotions were running high, and when it felt so good, when it felt as if everything was coming your way, everything else just seemed to be funny and ‘justified.’ I try to put myself in their shoes and as a player of the sport, I know it’s easy to get carried away, even more when you have thousands of people behind you. However, their behavior should not be condoned, especially by a school headed by the Dominicans. People should learn from this and be wary of the consequences of their future actions, not only the ones directed at them but even more at a larger network of people, to be even more socially responsible.”— Stephen Campita, University of the East

“I’m glad that Letran was able to win the championship after years of waiting. Beating a team with a 5-peat reign came as a huge bonus. However, a true champion should not dwell on shaming its competitor nor find joy in discrediting the essence of sportsmanship. With the posts and reactions that are circulating on social media, it is the demeanor of Letran supporters that is highlighted rather than the achievement of the school. I am disappointed by how they enjoyed their win with no regard for humility and love of the sport.”— Patricia Nava, University of Santo Tomas

“They have to be aware of what they’re doing, especially in this age of social media. A lot of people saw it and many were not happy about it. Victory should not be celebrated that way.”— Christine, University of Santo Tomas

“The photos that circulated on social media didn’t show sportsmanship. It was disrespectful. Although not all people from Letran should be blamed, someone should take action for what was done.”— Jacob, University of Santo Tomas

“I think their euphoria caused that action. They should have known better.” — Jenna, University of Santo Tomas

“The NCAA was made to promote sportsmanship between schools. This was a blatant act of disrespect and it’s not the way successes should be celebrated.” — Pamela Bolanos, University of Santo Tomas

“The people of Letran who did this should be ashamed of themselves. Supporting your team doesn’t mean you could demean the rival team.” — Nicole, University of Santo Tomas

“Coming from a respected school like Letran, they should have known better. Doing this makes them look bitter and arrogant.”— Carla Tambalo, University of Santo Tomas

“Dethroning San Beda was a big feat but doing this made Letran look like the lesser competitor.”— Karen Yao, University of Santo Tomas

“As a fan of San Beda, I found [Letran’s actions] very disrespectful and should be ground for investigation by the school’s officials. As schools that belong to the same association,
we need to show each other the same level of respect and exhibit cameradarie whether we win or lose.”—Raphael Reyes, University of the Philippines Diliman

“Letran definitely showed its dirty side by burning the shirts and placards of San Beda, which was totally unacceptable. Letran should have shown respect and sportsmanship even outside the court.” — Miguel Dypiangco, University of the Philippines Diliman

Pacquiao to give Letran players P100K each as championship bonus