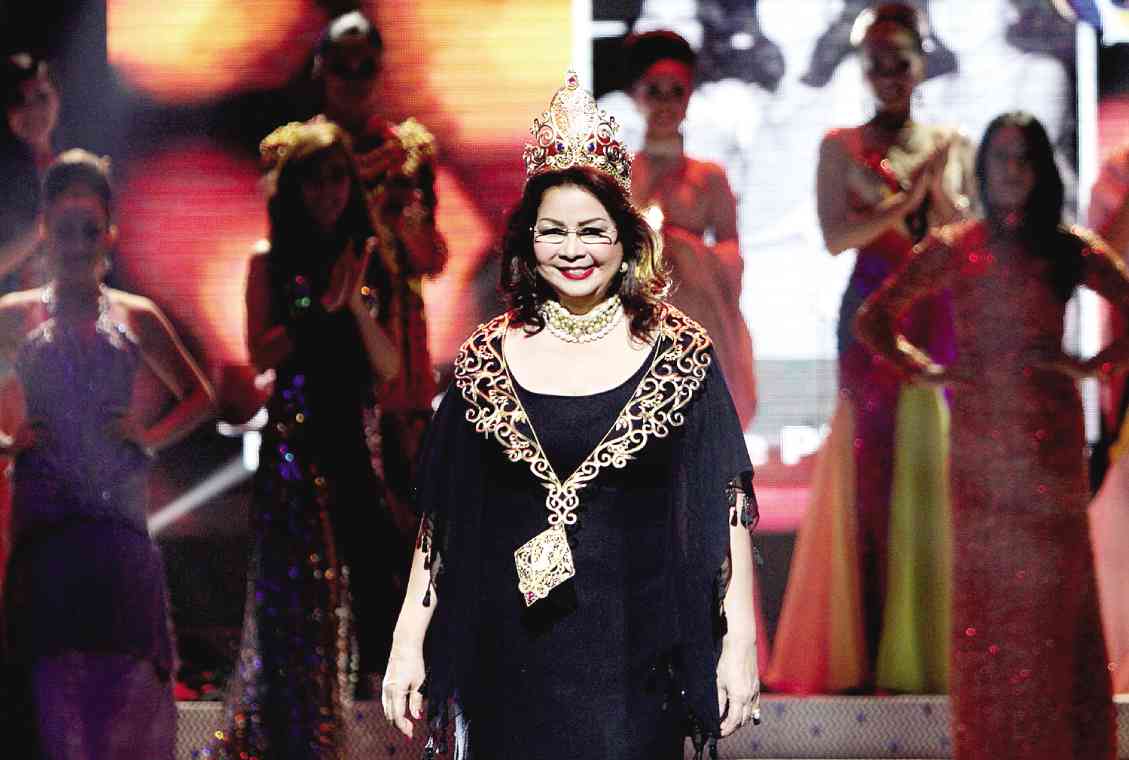 ALWAYS A QUEEN Joy Conde does her farewell walk and wears her crown one last time before she passes it on to the next Miss Republic of the Philippines. RICHARD A. REYES

Emotions ran high when 1976 Miss Republic of the Philippines Joy Conde stepped onstage for her farewell walk. After all, she waited almost four decades before finally being able to do it.

“I enjoyed the duties bestowed upon me for one full year, not knowing (they) will stay with me for 39 years,” said Conde, now 62, in her farewell speech toward the end of the revived pageant’s ceremonies at the theater of Solaire Resort and Casino on Wednesday night.

Conde relinquished the crown to Fermira Dianne Ramos, a 25-year-old Zambales native who bested 34 other aspirants for the title.

After a seven-year run from 1969 to 1976, the Miss Republic of the Philippines pageant was discontinued. The beauty contest used to select the country’s representative to the Miss World pageant.

But her participation in the London-based global tilt was mired with controversy, Conde recounted.

“Eight hours before pageant night, the ministry of foreign affairs approached me in London, and told me I had to withdraw from the contest because of the Philippines’ anti-apartheid policy,” she said in an Inquirer interview.

During that year’s Miss World pageant, South Africa had sent two delegates—one black and one white—to represent the nation. The Philippine government protested the move and upheld its stand against discrimination. As a consequence, Conde was asked to withdraw and return home.

“I felt sad because newspaper reports in London were saying I was a shoo-in for a Top 15 spot,” Conde said.

“But it was also fine because I was feeling tired by then. And we had to support the country’s antidiscrimination stand,” she added.

But Veneracion was also forced to withdraw from the competition because of the government’s anti-apartheid policy, despite having a strong shot at becoming the Philippines’ first Miss World winner.

Conde continued her civic duties as Miss Republic of the Philippines during the pageant’s break. “I had the opportunity to do something for my country. It made me a fulfilled woman,” she said.

But with the pageant’s furlough extending indefinitely, Conde eventually shook off her beauty queen status and got busy raising a family.

“I have been married for 32 years now,” she said. “At 62, I’m a proud mother of two—a lawyer in public service and a business executive,” she added.

Her son, Conde said, is working at the Office of the President, while her daughter is a Nestle executive based in Switzerland.

“As my reign ends tonight, I can say I enjoyed more than my share of fame and controversies. God is kind and generous. I will cherish my past memories for as long as I live,” the longest-reigning beauty queen in the country said in her farewell speech, as the pageant prepared to hand over the beauty title to a new set of winners.

The pageant will now “go beyond physical beauty and glamour, and embody the image of a modern Filipino woman who is intelligent, self-assured and empowered,” said entrepreneur and socialite Lynette Padolina who has revived it.

The new winner will serve as a role model for young Filipino women “by promoting education and participating in the government’s sociocivic programs,” Padolina said, adding that the newly crowned Miss Republic of the Philippines will also be an ambassador of goodwill who will welcome foreign visitors to the country.

Conde expressed elation over Padolina’s move to revive the pageant, as it would “explore a woman’s multiple facets other than her beauty. I appreciate (Padolina’s) focus on the ladies’ attitude for this edition,” the former Miss Republic of the Philippines said.

“Before, being beautiful was enough. Now, there are more important things other than beauty. With a bombardment of pretty ladies these days, what makes the difference is her attitude,” she added.

The title comes with a four-year scholarship grant, a one-year management contract from the organizers, P100,000 in cash, plus gifts and services from the pageant’s sponsors.

Ramos, the new Miss Republic of the Philippines, was also proclaimed Best in Philippine Terno, Miss Megadata Corp. USA and Miss Via Mare.

The special title of Miss Republic of the Philippines-International, awarded to a representative of overseas Filipino communities, went to Milan’s Beatrice Valente, who was also named Miss Congeniality.

One of the heavy favorites, 20-year-old Joselle Mariano from Cavite province, got a runner-up spot and was proclaimed Miss Luzon. She was also best in swimsuit, Miss Talent, Miss Pleasant Touch, Miss Astoria and Miss Halcyon.

Miss Republic of the Philippines is back with P500,000 prize